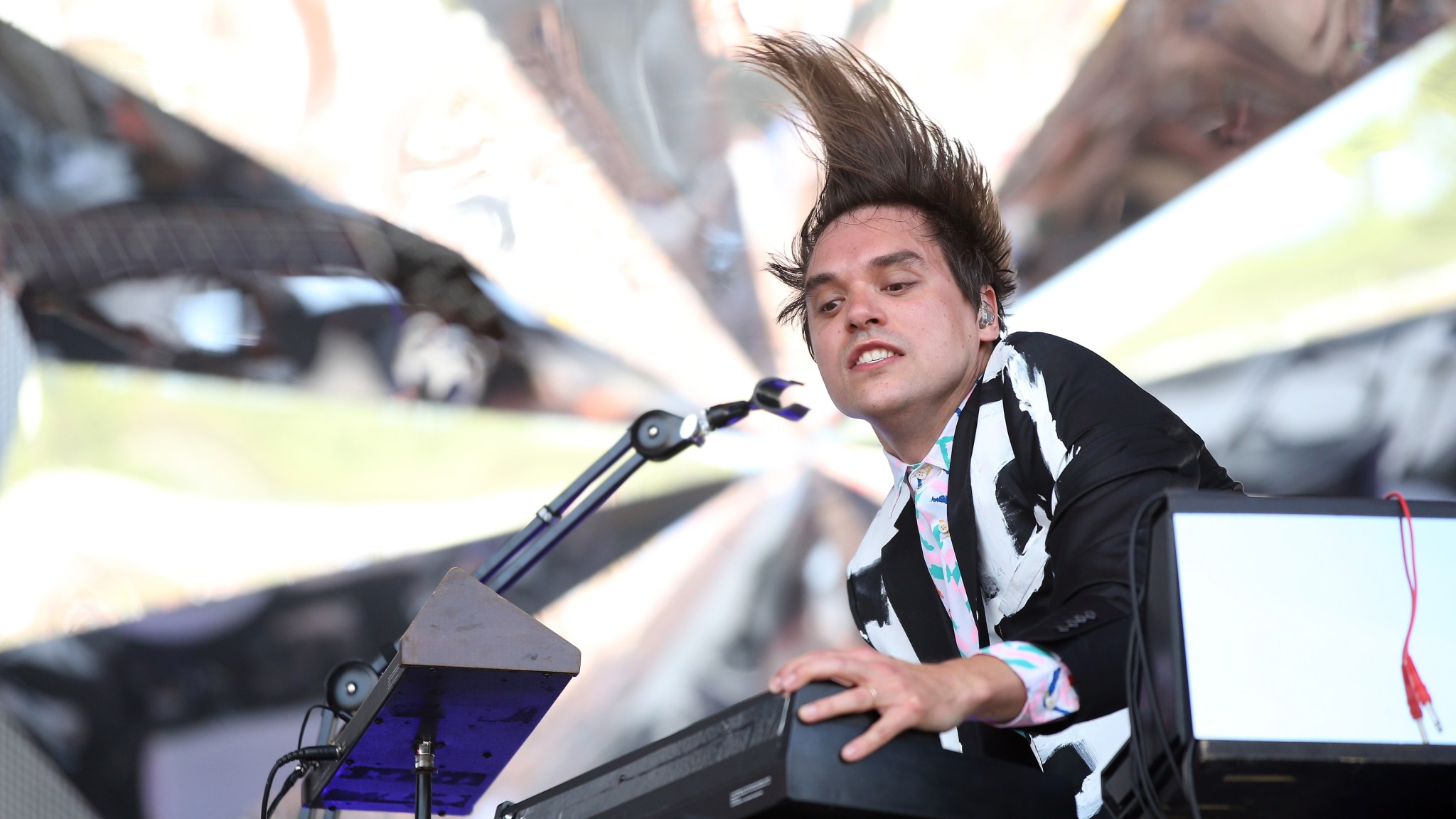 Will Butler has lived in Montreal for so long — 9.75 years, by his exact estimation — that it’s often forgotten than he and his brother Win originally hail from Texas. But with his debut solo LP, Policy, Arcade Fire’s excitable sidekick has made what he calls a tribute to American music. It’s all over the map — there’s tossed-off punk, cool synth-pop, stately piano balladry, and scores of goofy-ass lyrics. (The most quoted line, from the amiably loopy “What I Want”: “If you come and take my hand/ I will buy you a pony/We can cook it for supper/I know a great recipe for pony macaroni.”)

Clocking in at just eight tracks that zip in and out in just over a half-hour, Policy is a welcome rejoinder to the last Arcade Fire LP, 2013’s Reflektor, the group’s most ambitious (and in my opinion bloated) album. Policy is blessedly free of the big concepts that have become integral to Arcade Fire records. Butler doesn’t address the lapses in human connection inherent to the digital era, the oppressiveness of the suburbs, the hypocrisy of organized religion. He’s just made, with a minimum of fuss, an album of songs — Policy was recorded in a week, mostly by Butler, and it’s imbued with what he calls “dumb humor.”

This isn’t exactly a surprising look from Butler. In contrast with the sternness that his brother radiates onstage, Will is a bit of a goofball, known for whipping his hair about and jumping ecstatically between instruments. (In Arcade Fire’s Austin City Limits episode, the band’s performance culminates with Will hopping around joyously with a potted plant.) When I connected with Butler over Skype last month, we talked about how Policy and his burgeoning solo career were a deliberate change of pace from the arena-rock machinery of his band.

You made this record pretty quickly, and you played most of the instruments yourself. I imagine doing a record that way must have been refreshing coming off of Reflektor, which was such a huge project.

Yeah, definitely. [It was] in reaction to the Reflektor tour, where there’s so much infrastructure, where you have an idea and you tell a person and then you tell six people and they tell five people. Then a week later you see the results of the idea, and then you discuss it. It was very satisfying to have an idea, do it, then say, Oh that’s a bad idea, let’s do another one. Being able to go through six ideas in 15 minutes instead of two weeks.

Does the machinery that’s around Arcade Fire now ever get to be too much?

Click here for all of our interviews with fascinating people from the worlds of sports and pop culture.
Anything gets exhausting. If I was doing everything by myself all the time, it would get old really quick. There’s things you can only accomplish with a massive team — like, going into debt is bad but sometimes getting a mortgage gets you a house. But you have to leverage things. Arcade Fire now has leverage to do things, which is really awesome. It’s nice to have the ability to record the exact sound that you want. The final goal isn’t to make something more complex. But there are things you can only make in a complex way. And there are things you can only make in a simple way so it’s nice to try and make things in a simple way.

Reflektor is the kind of record only a handful of bands on the planet have the means or ambition to make. Do you feel like Arcade Fire is carrying a torch for something that is disappearing?

I hope not. I hope it’s more future-oriented than that. I don’t want for people in 50 years to look back like, That was the dying gasp of the era. [Laughs.] Part of our goal, besides just making music that expresses something specific and moves people, is to move the culture, to push culture, and I think we’re doing a relatively good job of that. I think it’s fun to be in a position that is slightly challenging to people and to the current mind-set. 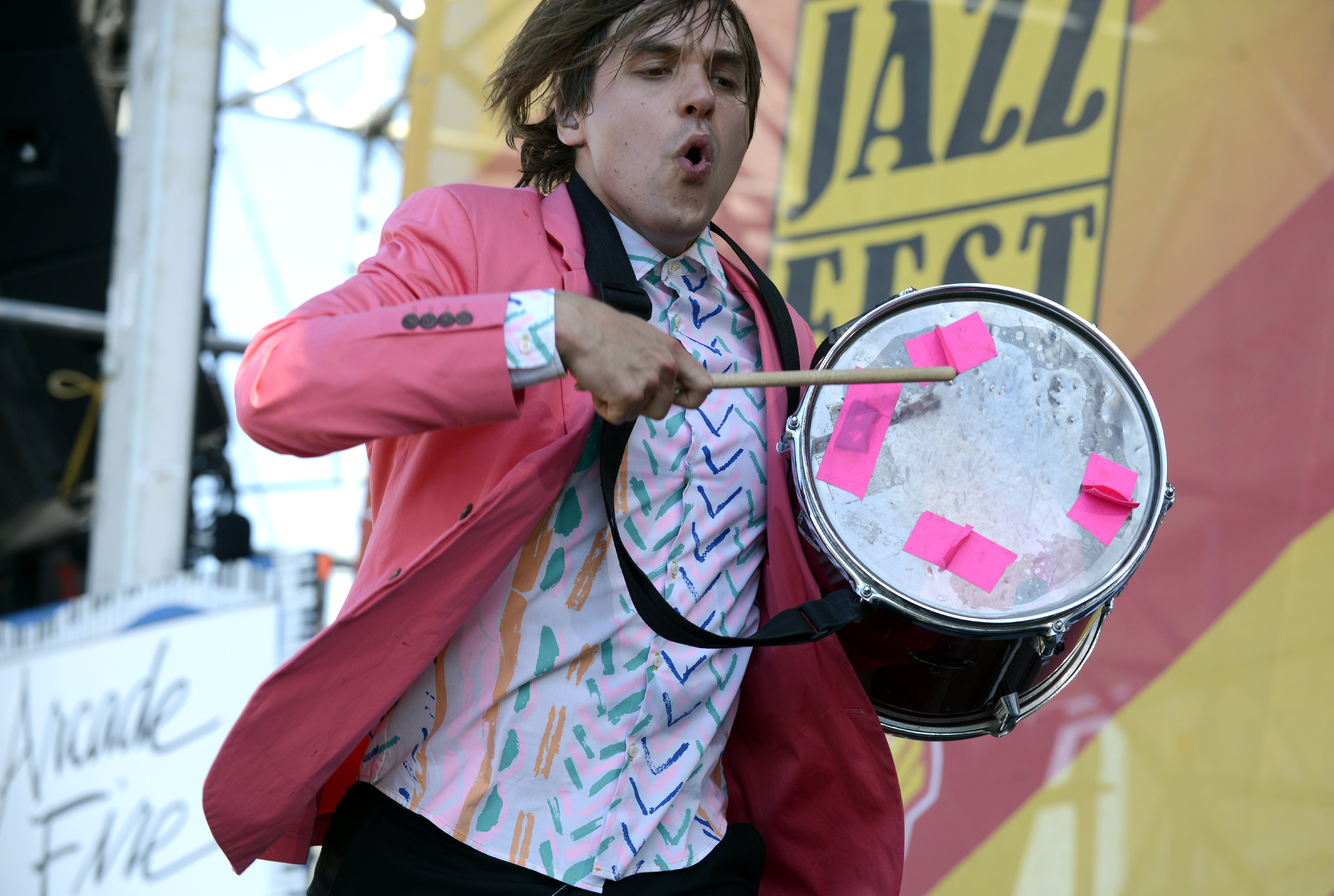 Reflektor marked the first time that Arcade Fire faced a significant critical backlash. The band generally is under a lot more scrutiny now. Anything Arcade Fire does next will be intensely analyzed and debated. Does that ever get to be a burden?

To be honest, we’ve always done a good job of just doing whatever the music dictates. Part of that is living in Montreal, far from the [center of] culture. Part of it is we’re a big enough band where there’s peer pressure to just focus on the music. Thus far we haven’t cared too much about the scrutiny. It will be interesting, though, because we were under a lot of scrutiny, so maybe it will affect our lives. But this time it has yet to affect our lives deeply.

So you’re not one of those people on Twitter, searching for your name, and reading what people say about you online or anything like that?

Well, I am currently just because I’m putting out new music. But in general, no, not really.

One of the things I really like about Policy is that it’s eight songs, it’s about a half-hour, and you clearly just went in and bashed the songs out quickly. Is it possible for Arcade Fire to make a record like that? Or is the band too big now? Arcade Fire’s concepts have gotten more grandiose with each LP.

I think we could. But there’s a lot of creative minds there, a lot of push and pull. I would push us to do some more gut work. But if we just did exactly what I want, it would not be as good as if we all worked together, so I’m curious to see what will result from that. I think that’s what’s really exciting about that band is how the different people push it in different ways. Like, Richard [Reed Parry, Arcade Fire’s multi-instrumentalist] can be really infuriating sometimes, but it’s a much richer experience for the ways he makes it infuriating. And he also is not infuriating sometimes.

You’ve described Policy as American music, which is interesting because people generally associate Arcade Fire with being a Canadian band. Was there ever a time when you were reluctant to associate yourself with an American tradition of music?

No. It’s all I’ve ever known. It’s more just a term of accuracy. The skill I’ve devoted my life the most to is American English.

When did that education begin in American music? What are your roots in that regard?

My mom’s family is all musicians. My mom’s dad is a guitarist by the name of Alvino Rey — he was born Alvin McBurney. He was a banjo player named Alvin McBurney, [then] he took up the guitar and he was named Alvino Ray because Afro-Cuban music was popular in the ’30s. He held the first electric guitar prototype for Gibson and he was playing jazz music. In the ’40s, Charles Mingus was his bass player, but Charles would have to wear a Hawaiian shirt and everyone would have to pretend he was Hawaiian so that he could stay in the segregated hotels with them.

It’s just that blend of black music and Hawaiian music and jazz and rock — there’s a lot of crazy stuff that happened in America. It’s so rich, that’s partly why it’s been so influential around the world.

I imagine that all kinds of music played in the house when you were growing up.

Well, my mom is a harpist, so most of the music was her playing. She played Bach and she played jazz stuff and bossa nova stuff. She played ’70s rock-and-roll piano. [My parents] didn’t listen to a ton of music. You’d listen to Segovia at dinnertime. We’d listen to Thriller, that was a big album. Not a ton of albums in the house — an insane amount of music, but not a lot of albums.

My initial thought when I first played Policy — this is probably what most people will think when they first hear it – was that it sounds like a mixtape. You’re playing rockabilly on one track and synth-y pop on the next track. When you started making Policy, were you thinking that this is the kind of record you wanted to make?

I tried briefly to stylistically try to unify it, and it didn’t feel appropriate. I mean, it very naturally happened that way. It was eclectic. I think Arcade Fire is very eclectic — it’s a little denser, so it blends together a little smoother. But yeah, it certainly [reflects] how I’ve listened to music. I worked at the college radio station in Chicago and it was really hardcore. You weren’t allowed to play the same artist more than once in a semester. You’d be like, OK, here’s Terry Riley, and now here’s Jay Reatard, and now here’s ESG.

Were the songs on Policy at any point earmarked for Arcade Fire?

I had a pile of songs that were laying around, and three and a half of them are on the album. And the rest was kind of like a mixtape process where I was like, What fits together? I wanted to be reasonably well planned going into the recording process. I had three-ish songs already written. I wrote three other songs. I did “Anna” in the studio, but I wanted to have a sense of most of the music before going into it.

I dabble every day. For an Arcade Fire album, that dabbling will come out in different aspects — like an idea will translate to plunking on the piano at home to being a synth line for a song. I dabble and then I essentially have to set deadlines. For this project there was not an actual deadline because I wasn’t signed to a label, but I was like, Oh, I’ve got some dates in May, let’s finish this.

The cliché about people in bands who make solo records is they’re trying to do something on the solo record that they feel they can’t do in the band. Is that true for you?

Vaguely. I thought, I’m a musician, I’ve wanted to do something on my own forever. But it wasn’t until the last couple years that I thought I had a slightly different voice than the band. In terms of just talking about reaction to the band, I was like, Oh, I do have a point of view that is different enough to where I’m willing to express it at this point. Whereas eight years ago, that point of view coincided very neatly with Neon Bible, so I might as well just focus on making Neon Bible.

What is your point of view, exactly?

You’ve said there’s more “dumb humor” on this record than you’d find on an Arcade Fire record. What do you mean by “dumb humor”?

I kind of meant more id-based. I think of the Violent Femmes being hilarious, utterly hilarious. They want to be funny, but it’s just so straight from the teenage heart. There’s an aspect of that that I really love. Some of it is just tone of voice, which isn’t necessarily the most powerful humor ever, but you can have a light tone of voice that prepares someone for a blow. You know, I talk about Moby-Dick a lot because it’s an amazing, serious, giant piece of American literature that has, like, jokes about whale penises.