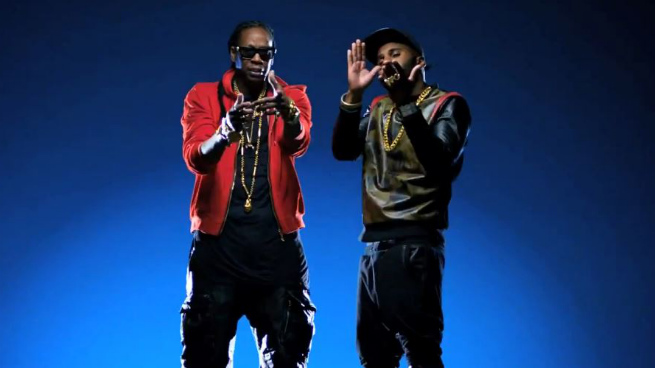 About a year ago, R&B singer/songwriter Jason Derulo made his return to radio pop after a spinal injury he sustained during rehearsals for what was to be a tour in promotion of his second album, Future History. The song, “The Other Side,” was the lead single off his 2013 album Tattoos and is a peculiar thing. It would have certainly qualified for this column last summer — there was no escaping it — but it only ever peaked at 18 on the Hot 100. It was hyped as being the emotional, triumphant return of Derulo, and on first listen has the soaring EDM-lite strains of a “message song” about some kind of spiritual breakthrough, but upon closer inspection, it’s really just about getting drunk and fucking your friend. I mean, that’s perfectly valid subject matter for a song, but after all the talk of Derulo’s “healing process” after his setback, now all I could picture was him having sex in a neck brace.

“Talk Dirty,” the (seemingly delayed?) follow-up single, is more up-front about its intentions, and for that at least, I have to give it credit. Honestly, though, there should be an unspoken rule that pop music has room for only one “world sex tour” song every five years or so — I feel like I just recovered from Pitbull and Ch–s Br–n’s “International Love.” (Sample line: “Down in D.R. they’re looking for visas / I ain’t talking credit cards if you know what I mean!”) Both tracks are the logical evolution of the Beach Boys’ “California Girls,” but once other (especially third-world) countries start to come into the picture, it’s easy to sound like an anthem to sexual colonialism. Derulo slips in and out of an Adam Levine–via-Kingston patois as he sings about having unintelligible conversations with global hotties, and I wish I could see it as just a harmless ode to the international language of ass, but it always leaves me feeling a little grimy. I’ll admit this song would be twice as tolerable without the broken-English “azn girl” voice bookending the track, but we’d still have lines like “Our conversations ain’t long, but you know what is.” You hear that, Haiti? Jason Derulo and his lengthy genitalia are coming for you!

Speaking of genitalia, both highlights of this song occur during 2 Chainz’s verse, in which he rhymes “genius” with “peñis” and delivers the strangely adorable, borderline abstract line “Her pussy so good, I bought her a pet” (though the sleuths at RapGenius are ON IT). We also learn that 2 Chainz has continued his relationship with “Big Booty” from “Birthday Song,” or at least, he still has her number in his phone. Despite its ramped-up explicitness, Chainz’s brief visit feels like a welcome break from the oily sleaze of the rest of the song.

“Talk Dirty” has a considerable amount of “Mambo No. 5” DNA in its veins, another song that bravely explores the potential double meaning of the word “horny.” “Talk Dirty” gets its horniness via a sample from American Israeli band Balkan Beat Box, and it’s the best part of the song. The central off-kilter saxophone line actually sounds like it is fulfilling Jason’s request, slurring drunkenly back at him in the drop. It sounds like it would be really fun to dance to, and the music video is smart enough to pair it with a cool, silhouetted all-male dance interlude. I nearly fall for this song every time, and if radio stations were smart, they’d leave out the “Wha? I don’ unnastan!” bumper and transition seamlessly into Katy Perry’s “Dark Horse” or whatever without missing a beat. But maybe it’s only realistic that we can’t have our klezmer-inflected booty drops without a dollop of Asian caricature. Jason Derulo would have us believe the world is one big sexy melting pot. Unfortunately, sometimes the racist parts don’t quite cook down.

‘Sin City: A Dame to Kill For’ Teaser: So Style, Much Cool