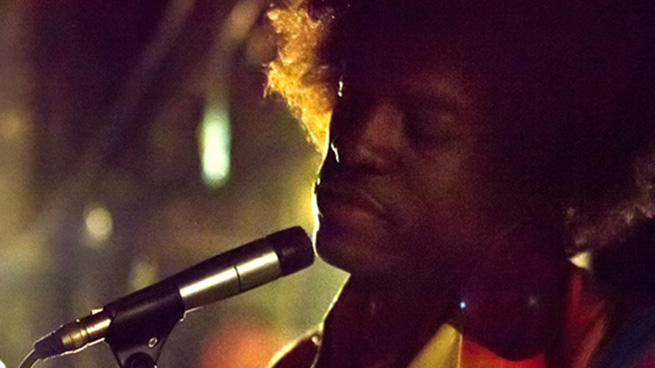 First there were rumors. And then photos. But today, we finally got real video evidence of All Is by My Side, the Jimi Hendrix biopic starring André Benjamin, one half of Outkast.

Two clips were recently released, both focusing on Benjamin and Imogen Poots (playing Linda Keith — friend of Jimi, possible lover of Jimi, and then-girlfriend of the Rolling Stones’ Keith Richards). The first, posted yesterday, shows the flirtation between Jimi and Linda before he goes to the 1967 Monterey Pop Festival.

And today we got a second look: a scene between the two and Chas Chandler, then-bassist for the Animals and Jimi’s future manager.

Yes, Mr. Three Stacks looks a lot like Jimi. We’ve known that ever since the photos began to surface. But the biggest takeaway from these two clips is the accent. It throws you off, especially if you are familiar with André’s speaking voice, or his many alter egos. Preparing myself for this first watch, I was expecting André’s hilariously bad “Good Day, Good Sir” British accent, and for all his conversations in the film to sound like he was trading wordplay quips with Farnsworth Bentley.

Yeah. André pretty much nailed it. Whether the film, written and directed by John Ridley (12 Years a Slave, that episode of The Fresh Prince of Bel-Air when Uncle Phil and Aunt Viv II go on Soul Train for the 25th anniversary), will turn out to be great remains unclear (until it premieres at Austin’s SXSW Festival on March 12). But at least there’s proof that not only will André look like Jimi, but also sound like Jimi. Step three: how he plays that guitar.

And then, of course, the acting. And the plot. And pretty much everything else. But baby steps, people. Baby steps.

Filed Under: Movies, Andre 3000, Andre Benjamin, All Is By My Side, Jimi Hendrix, john ridley

MTV Movie Awards voting is open, just in case you were getting shaky from awards season being over.