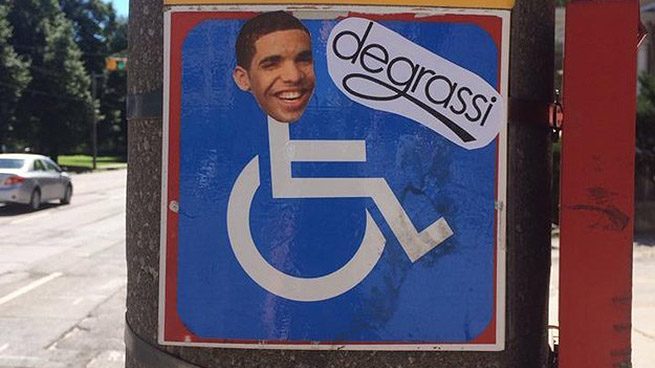 Aubrey D. Graham and his sweaters have been the stuff of memes since day one. And now a couple of jokesters in Toronto — one of two things/places Drake professes to care about — have gotten around to the important task of reminding everyone in the city limits that rap’s biggest rapper (a) has a great smile and meticulously maintained hair, and (b) acted on 145 episodes of Degrassi: The Next Generation as Jimmy Brooks, a basketball player who gets shot and ends up in a wheelchair. “Never forget,” says Canadian bloggernalist and stickerer Lauren O’Neil, who, with her boyfriend, has been covering Toronto’s handicap signs with photos of Drizzy-as-Jimmy.

“My boyfriend made the stickers last Wednesday and we’ve been ‘draking’ the town ever since,” O’Neil, who finds Drake “inherently hilarious,” tells BuzzFeed. “We just want to make people smile.”

It’s implied that everyone will smile at Aubrey D.’s “inherently hilarious” expense. But the thing is, all that these Drakists are doing is reminding Toronto, a town Drake has single-handedly renamed “The 6,” that Drake exists. As if every person in Toronto and also the world didn’t spend every single day already knowing Drake exists.

Despite the success of these memes — #starbucksdrakehands comes to mind — Drake always wins. Drake sucks? Drake’s got more R&B/hip-hop chart-toppers than anyone ever. Drake gets caught lint-rolling in his courtside seat? Drake’s got OVO-branded lint rollers like a day later. Drake’s too soft? Drake’s hosting SNL in the shortest short shorts, mentally beaming “We Made It” straight into your head, winning. He just wins, every time. I mean, here’s what he posted on Instagram the other day: