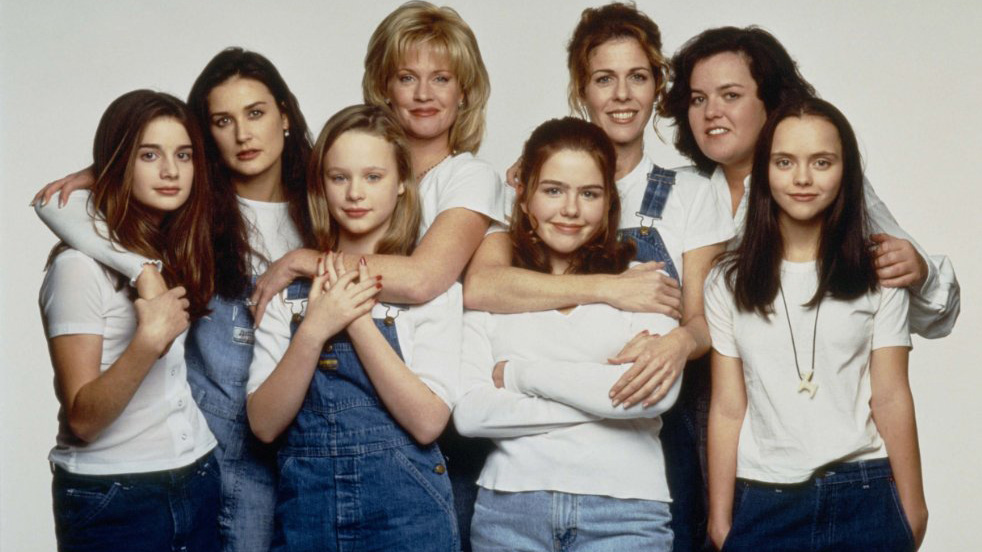 Bragging Rights is a series with a single goal: to determine which member of a cast, a team, a band, or a presidential cabinet is killing it the most, years later. Our writers will take turns giving their takes on who has the bragging rights from the posse of their choosing. In the fifth installment, Katie Baker looks at the past and present of a 20-year-old celebration of girl power, séances, and stuffing your bra: Now and Then.

Like so many suburban tween girls, I harbored unfortunate delusions of grandeur. Any day now, I thought, I’ll be discovered — whisked from my stage in front of the bathroom mirror to the set of a feature film, my name in the credits with an “and introducing …” in front. It was never meant to be, but that didn’t stop me from being both jealous of and mildly obsessed with my generational cohort of young actresses, the Thora Birches, Christina Riccis, and Gaby Hoffmanns of the world. What I would have given to star in Monkey Trouble!

Birch, Ricci, and Hoffmann, along with the late Ashleigh Aston Moore, all joined forces in the 1995 film Now and Then, which was advertised as a girlier version of Stand by Me. Each girl fit some niche archetype: the chubby, sheltered naïf with an overbearing mom; the brooding, sci-fi-loving child of pending divorce; the blonde drama queen with vanilla-pudding-filled balloons tucked into her bra; the motherless, sarcastic tomboy who got to smooch Devon Sawa.

These personalities endure even when the characters, in a fun bit of casting, grow up. Birch becomes Melanie Griffith, Ricci turns into Rosie O’Donnell, Hoffmann blossoms into Demi Moore, and Aston Moore sprouts into a very pregnant Rita Wilson, whose any-day-now delivery provides the excuse for getting the band back together. (The New York Times declared this premise “strained and contrived.”)

The movie, most of which is set in the summer of 1970, includes all the usual pre-teenage high jinks, from swimming-hole skinny-dipping to graveyard exploring to bumming cigs off a Vietnam vet turned hippie played by Brendan Fraser. But in the real world, the film was mostly a snapshot of 1995: A good number of the actors and actresses in Now and Then were at or near their career peaks when it was made.

Here, we seek to determine which of the people involved in Now and Then have had the best Nows since Then. Note that this isn’t an overall lifetime achievement award; the clock starts when the movie ends. (Sorry, Melanie Griffith!) In short: If the cast were to reunite the way the characters do in the movie, who would have the best answer for “So, whatcha been up to?”

Azaria is a performer who melts so entirely into his roles that it’s often only afterward that I even realize it was him. In Now and Then, he plays poor Bud Kent, a cheesy man in a leisure suit who comes to dinner with Gaby Hoffmann’s separated mother only to be tormented by the sullen teen. (Hoffmann tells him he has food in his teeth, causing him to spill on himself; later, her little sister, played by a tiny Rumer Willis, compliments him on his “pretty scarf.”) Hoffmann pretends to mishear his name: “Bug?” she asks. “Bud,” he replies, emphasizing the D like he’s the WASP-y mom overpronouncing “Bundt” in My Big Fat Greek Wedding, or one of the actors in that annoying “Frog Protection” commercial.

Since his minor role in Now and Then, Azaria has worked hard for the money as Agador Spartacus in The Birdcage, turned in the funniest performance in Along Came Polly as scu-BA! instructor Claude — “’appy as a ’ippo!” — and had other minor roles in films like Grosse Pointe Blank and Shattered Glass.

But what catapults him to gold-medal status is his legendary, longtime, Emmy-winning voice work on The Simpsons. Azaria voices the characters of Moe the Bartender, Apu the Kwik-E-Mart owner, and Chief Wiggum — in addition to some 20 other characters. (He explains his work as Dr. Nick as “a bad Ricky Ricardo impression.”) He’s gotten so accustomed to the creative freedom he has on the show that, according to his Wikipedia page, it’s hurt him in other ways: Creative differences during a session to record the voice of the “Jell-O Man” for a commercial resulted in him leaving and pledging “to never record for an advertisement again.” That’s some serious gold-medal clout.

You may not have heard of director Lesli Linka Glatter — Now and Then was one of the only feature films she worked on — but in her brilliant career as a television director, she’s probably been at the helm of at least one of your favorite shows.

Glatter’s work has included multi-episode directorial stints on Freaks and Geeks, Gilmore Girls, The West Wing, ER, House, Mad Men — including the infamous lawn mower episode — Pretty Little Liars, True Blood, and most recently Homeland, where her first episode was the harrowing “Q&A.” She’s also done one-off stints on The Leftovers (she’s a producer for the show, as she is on Homeland), Justified, Masters of Sex, The Good Wife, Weeds, and Grey’s Anatomy.

I want Gaby Hoffmann to be my sister, my best friend, my girlfriend, my mom — take your pick. The child actress who grew up in the Chelsea Hotel had a few good roles in the years following Now and Then, including spots in the Woody Allen musical Everyone Says I Love You and the ensemble film 200 Cigarettes, which also featured Ricci and Garofalo. But she went mostly dark in the aughts, living her life while “weepy women approach[ed] her to tell her how much [Now and Then] meant to them.”

Lately, though, she’s been everywhere. She and Michael Cera took mescaline while filming their Sundance flick Crystal Fairy in 2013. She played an ex of Louie’s on Louie, Jenny Slate’s BFF in Obvious Child, and Reese Witherspoon’s pal in Wild. And between her personal discoveries on Transparent and militant childbearing earth-mama role on Girls, we’ve seen more of her — literally and figuratively — in the last year than we did even when she was making precocious talk-show appearances as an actual girl.

(Ranked in descending order of braggadoccio.)

Rosie has hit a few bumps recently, quitting The View and splitting with a partner for what seems like the umpteenth time. But both of her old talk shows — the one with the Koosh balls, and the one with talking Koosh ball Elisabeth Hasselbeck — made Rosie into a household name, and she wielded her power wisely: We’d all like to publicly call Donald Trump a “snake-oil salesman,” after all.

Demi Moore’s best days as an actress came pre–Now and Then, but it was post-1995 that she diversified her credits. Did you know that two young sisters, Suzanne and Jennifer Todd, and Moore were the producers behind the Austin Powers trilogy? Team Todd also produced Boiler Room, Memento, the Golden Globe–nominated Across the Universe, and Alice in Wonderland — as well as Moore’s G.I. Jane.

Bonus Demi Moore fun fact: She owns thousands of dolls, many of which will haunt your dreams, that she insured for over $2 million and once bought a whole house for. Ashton Kutcher was understandably creeped out, though no word on whether any of the dolls resembled his mother.

P.S. Garofalo has quite a résumé of shoulda-coulda-woulda: According to Wikipedia, she was originally considered for Renée Zellweger’s role in Jerry Maguire; turned down the part of Gale Weathers in Scream because she thought it was too violent; and said no to The Fight Club’s Marla Singer because she thought the movie was too weirdly sexual. I will now spend the rest of my day imagining an alternate universe featuring Garofalo in all three of those roles.

Now and Then: Music From the Motion Picture

I’m like 89 percent certain I acquired this CD via the BMG music club. Amazon has it listed under “Pop > Oldies > Bubblegum.” Customers who bought this item also bought My Girl: Original Motion Picture Soundtrack. The track list includes multiple Jackson 5 songs, “Sugar, Sugar,” “Knock Three Times,” and “Signed, Sealed, Delivered I’m Yours.” When you’re this timeless, you don’t even need to brag.

Easy to mock, but he’s got dat Mummy money!

Like many of the actors in Now and Then, Ricci may have largely peaked in 1995. (By the way, her role in the movie included a proto-Lannister line, delivered to Devon Sawa and his brothers following a Jell-O balloon attack: “We owe you, Wormers! And we always pay our debts!”) Sure, she was great in The Ice Storm, and she won a Golden Globe for her role in The Opposite of Sex in 1999, the same year she accidentally punched Ana Gasteyer in the face on SNL. But besides that, she’s mostly appeared in flops like Black Snake Moan and the Wachowskis’ Speed Racer. Her most recent role has been as old-timey ax murderer Lizzie Borden for the Lifetime Network.

The daughter of two porn stars — both were in the original Deep Throat — Birch parlayed a career as a commercial kid into a string of sort-of hits, a number of them featuring that beloved ’90s theme: divorced parents. As with Ricci, Birch’s biggest success came with a 1999 film, in her case American Beauty, and a couple years later she was again praised for her work as Enid Coleslaw in Ghost World. (Ricci was considered for this role at one point.) But since then, she’s been mostly unheard of, save for a Lifetime movie of her own: Homeless to Harvard: The Liz Murray Story.

3. “In 2002, she voiced the character of Margalo the bird in Stuart Little 2. Since then, her appearances in films have been infrequent and low-profile.”

Speaking of Bundt cakes, Rita Wilson, the daughter of a Greek mom and a Bulgarian Muslim dad, won the 2002 Producer’s Guild of America Visionary Award for her work in turning Nia Vardalos’s one-woman play into the movie My Big Fat Greek Wedding. Since then, she’s also produced Mamma Mia!, played Arlene Lipschitz in Jewtopia, appeared in a handful of episodes of The Good Wife, and, most recently, killed it as Marnie’s mom. (I’m going to assume that her recent bizarre musical career was some sort of Method acting for that role.)

When One Direction lost a member the other day, I tried to remember which person(s) had the sort of impact on me that those British lads have had on today’s tweens. The answer wasn’t Jonathan Taylor Thomas or Joey Lawrence — it was Devon Sawa, who was at the height of his powers when Now and Then came along, having just starred in Little Giants (swoon!) and Casper (SWOON!!!!!!!!!).

Since then, he’s been in SLC Punk!, Final Destination, Slackers, and something on television called Nikita. But the best thing on his résumé might be his role as the titular “Stan” in the music video for the Eminem song of the same name.

Which brings us to Bonnie Hunt, immortalized by virtue of her near-silent presence on that one version of the Jerry Maguire “Secret Garden” song that played nonstop on the radio for at least a full year of our lives. Sure, you never really hear her on the track, but you know she’s there — watching, judging, being Bonnie Hunt at her best.

Leachman once posed nude on the cover of Alternative Medicine Digest in a parody of Demi Moore’s Vanity Fair cover. She has a granddaughter named Hallelujah. And she is the second-best part of Spanglish — the best part being that delicious-looking late-night egg sandwich Adam Sandler makes.