Bragging Rights: The ‘Studio 60 on the Sunset Strip’ Pilot Episode 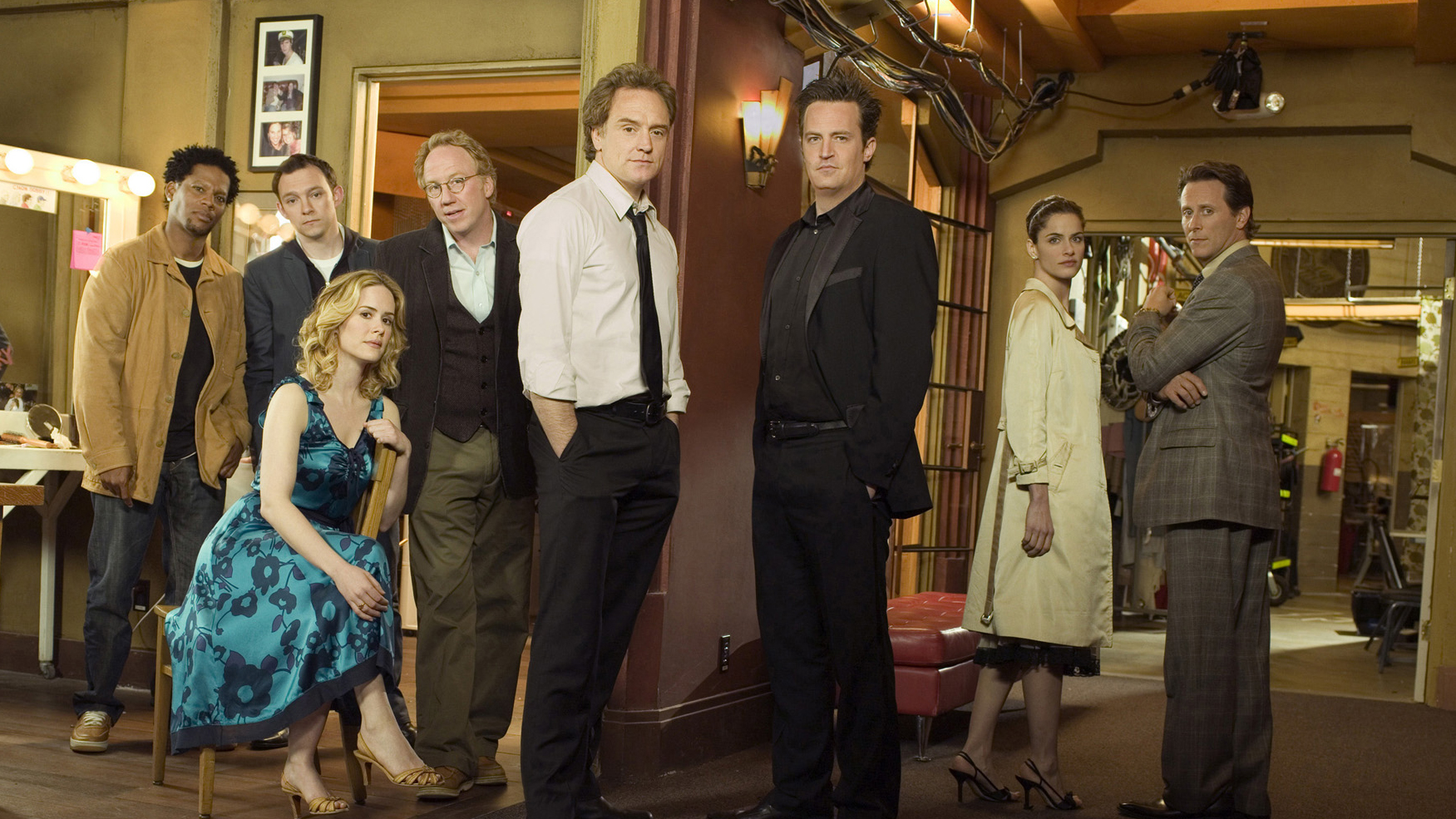 Bragging Rights is a new Grantland series with a single goal: to determine which member of a cast, a team, a band, a presidential cabinet — is killing it the most, years later. Different Grantland writers will take turns giving their take on who has the bragging rights, from the posse of their choosing. In this first installment, Rembert Browne will look at the pilot episode of Studio 60 on the Sunset Strip, which aired over eight years ago.

One of the standout things about this pilot is the sheer degree of star power on display. And not just any star power — 2006 star power. Which makes it a perfect choice for Bragging Rights, because a lot has changed since 2006.

WHO HAS THE BRAGGING RIGHTS?

Never forget that Triple Six won an Academy Award in 2006. Never. Which is why they were the musical guest on Studio 60, because they were so famous. While that moment was the true high point of a long, weird, beautiful rap career for Three 6 Mafia, it wasn’t the end of the road for Juicy J.

LOOK AT JUICE MAN AT THE 2014 GRAMMYS IN A TUXEDO, A GRAMMYS IN WHICH HE PERFORMED A SONG WITH KATY PERRY.

Why does Juice Man get the top spot over (spoiler alert if you don’t have the ability to look down) Aaron Sorkin? Because Sorkin was already that dude and was supposed to stay that dude, even with the Studio 60 stumble. This was never supposed to happen to Juicy J. He was never supposed to have a gigantic solo career and do songs with Katy Perry and Miley Cyrus and Usher and make great solo albums and become a phenomenon (beyond Memphis). He was always supposed to be that dude from Three 6 Mafia.

But since Studio 60, he’s been anything but. Which is why he has the ultimate Studio 60 bragging rights. 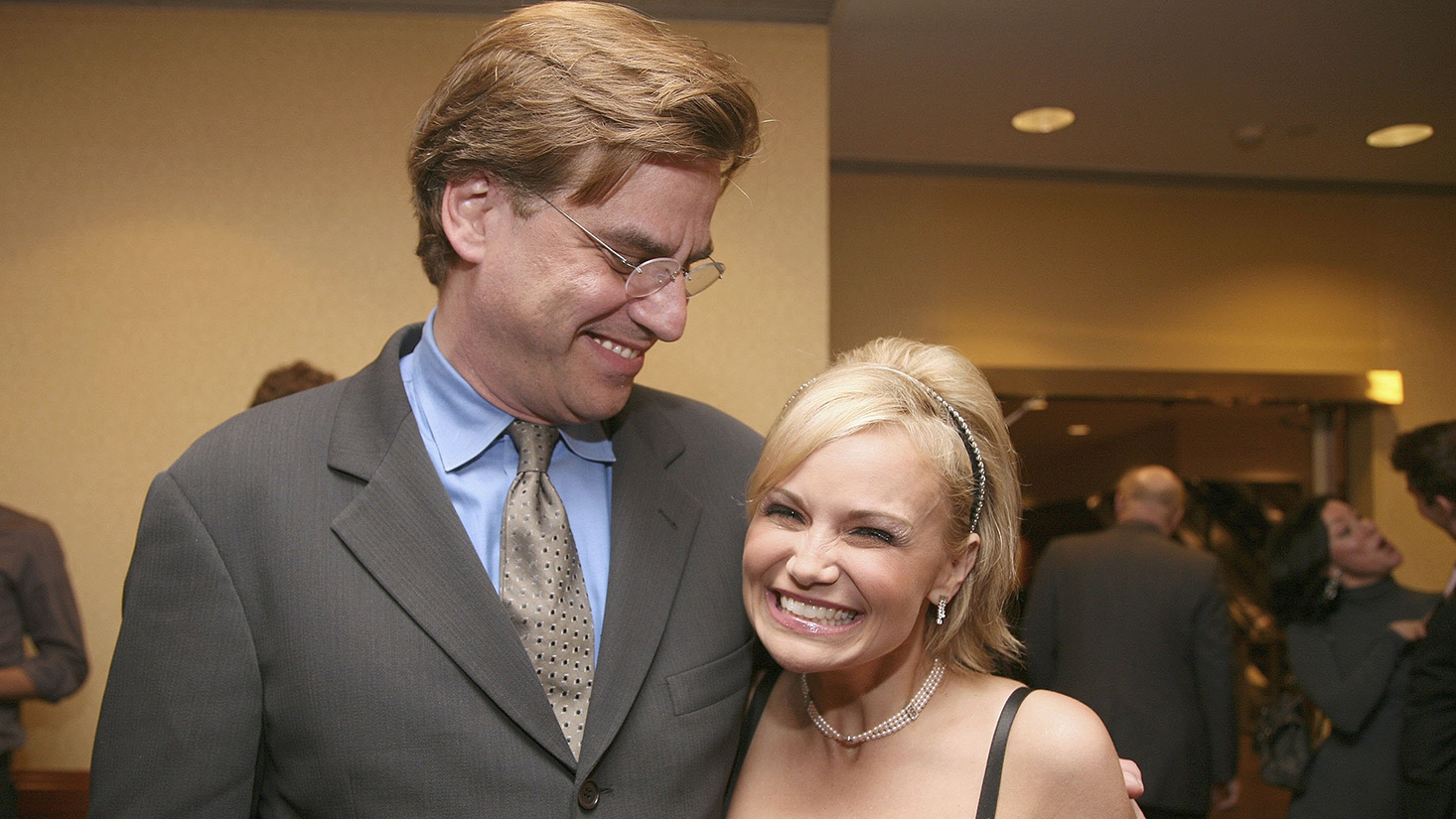 Studio 60 didn’t match the success of The West Wing. But after Studio 60, there was Moneyball. And Charlie Wilson’s War. And even if The Newsroom got dumped on, critically, he still had The Social Network. Love him and hate him, he has so very much to brag about. And he will.

Studio 60 was supposed to put her on the map, but then Studio 60 couldn’t put itself on the map. So Paulson took her career into her own hands. Which, again, is something to brag about. Which is the entire premise of Bragging Rights — to brag.

EVERYONE ELSE, MOST OF WHOM HAVE NOTHING TO BRAG ABOUT, BECAUSE MAYBE STUDIO 60 IS CURSED

Judd Hirsch was in Taxi, so he didn’t need Studio 60. Also, he was only in it for one episode, the pilot. He can’t be held responsible for the rest of that season. But again, none of this matters for Judd Gawd. But, through a different lens, maybe this is something to brag about. The pilot is great with Judd and then can’t make it without Judd.

The only reason he falls slightly below Paulson is because his pre–Studio 60 days (Taxi) so massively outweigh his more recent filmography. He’s coasting now (because he can), but Paulson is very much out here in these streets getting money. 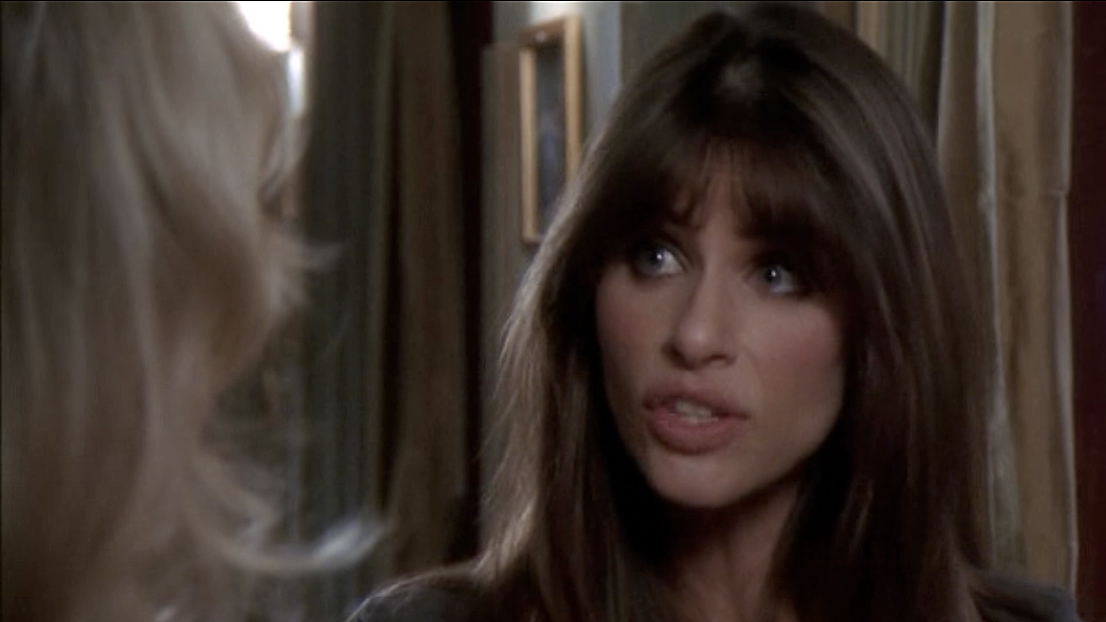 Studio 60 was supposed to be Peet’s breakout role. In the show, she plays Jordan McDeere, the new president of entertainment programming at the network. She’s the cool, young, smart, extremely charismatic boss — a character that not many people can pull off. You have to have some experience with being cool in your real life to be that cool on camera, which was a great look for real-life Amanda Peet. She’d been in some high-profile movies (The Whole Nine Yards, Something’s Gotta Give, Saving Silverman, Syriana), but this was supposed to shoot her into the stratosphere. And she played it well, getting nominated for a Satellite Award for Best Actress in a Television Drama. But then the show got canceled. And while she’s been plenty busy, for years there wasn’t much reason to bookmark her IMDb page.

Something happened to Peet just two weeks after the airing of the Studio 60 pilot: She married David Benioff. Five years later, Benioff became an executive producer and showrunner for Game of Thrones. I cannot stress how big that is for Peet when it comes to Bragging Rights. And then, on top of that, Peet’s had a pretty nice run over the past few years, costarring in Identity Thief, landing a recurring role on everyone’s favorite television show that they’ve actually never seen (The Good Wife), and starring in a new HBO comedy, Togetherness, which premiered earlier this month.

Dare I say, PEET BACK? 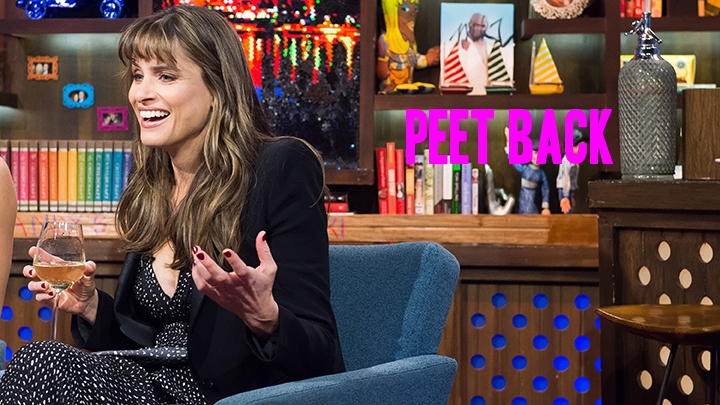 The Peet game is the long game. Unfortunately, it’s not enough to matter today, but it’s still pretty good.

PEET ONLY MODERATELY BACK.

When it comes to D.L. Hughley’s career, Studio 60 was supposed to be his second peak. His first was in the beginning of the 2000s, when he simultaneously was an Original King of Comedy (along with Steve Harvey, Cedric the Entertainer, and Bernie Mac) and had a sitcom that shared his name (The Hughleys). In the television landscape, having a show that lasts four seasons isn’t a small feat. It is worth noting, however, that two of those seasons were on ABC, and then the next two seasons were on UPN — which can be seen as a demotion, if you are aware of the definition of demotion.

So this second peak, with Studio 60, was a big moment for Hughley. His truly mainstream moment: a major part of an NBC show. Then it got canceled. There has not been a third Hughley peak. His most notable work has been in the hosting arena, from the 2008 BET Awards to a variety of game shows (Who’s Bluffing Who? — never aired; Who Wants to Be a Millionaire — guest host; Trust Me, I’m a Game Show Host — one season; D.L. Hughley Breaks the News — five months). In 2013, he did Dancing With the Stars. Since then, he’s mostly been doing radio.

It’s worth noting that he’s still an Original King of Comedy, which is definitely something worth bragging about. But again, he could have bragged about it even if Studio 60 had never happened. 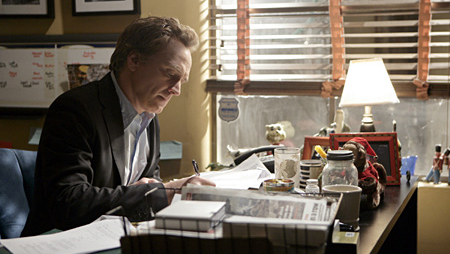 Like Hughley, Studio 60 was supposed to be a second chance for Whitford. The first? Playing Josh Lyman on The West Wing. That show — also created by Aaron Sorkin — made him an A-list television star (he won an Emmy for Best Supporting Actor in 2001).

The West Wing ended in May of 2006, and Studio 60 began in September. Those of us in the scientific community call that “momentum.” Since Studio 60‘s momentum-tripping cancellation, he has popped up here and there (The Cabin in the Woods, most notably), and he’s been on two shows that have been canceled after one season (The Good Guys and Trophy Wife). Also, his surface-level-amazing marriage to Jane Kaczmarek came to an end in 2009, which was sad. He did appear in four episodes of the Golden Globe–winning Transparent, but it’s currently unclear how much that role will exist in the second season (Whitford appears in flashbacks). Perhaps this show will be his comeback. But for the sake of Bragging Rights — which is what all actors are currently concerning themselves with — that doesn’t matter. Because that’s the future. And there’s no bragging about the future in Bragging Rights. Only the present and the past. 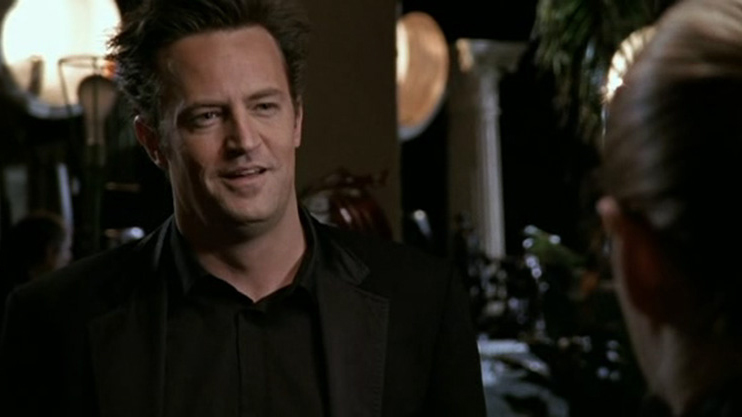 You can’t compare The Hughleys to The West Wing, and you can’t compare The West Wing to Friends. Friends is on another level of cultural relevance. What can be compared, however, are Whitford and Perry’s post–Studio 60 runs. Like Whitford, Perry was on two shows that were canceled after one season (Mr. Sunshine and Go On). And, also like Whitford, Perry’s future is potentially bright. He is costarring in the upcoming CBS comedy The Odd Couple, set to take the slot of Two and a Half Men, following the latter’s finale in February.

Perry hasn’t had much to brag about since Friends, but maybe 2015 is his year. But, again, that’s the future. So there’s really nothing left to say.

Nate Corddry, brother of Rob Corddry, got his big break being Rob’s brother. Rob was a correspondent on The Daily Show. In 2005, Nate joined the same show. A year later, Studio 60 happened. And then a year after that, Studio 60 wasn’t happening anymore.

Nate’s still acting. It’s not really Bragging Rights–level acting, but Studio 60 gave him some much-needed shine and he ran with it. He starred in Harry’s Law and now appears on Mom, which was just renewed for a second season. He’s the least memorable of the characters on the Studio 60 pilot episode, but simply being on a show that’s currently on the air is a big plus for the Studio 60 gang. Because it’s been hard out there. Really hard. Like, “what did Sorkin do to you people on set?” hard.

There aren’t a lot of people who can claim to have been on an episode of NCIS: New Orleans, 2 Broke Girls, Wilfred, Hot in Cleveland, Psych, Monk, all those other shows that are on TV that I forgot to list, and also play Thomas Jefferson on Sleepy Hollow. But then again, not everyone’s Steven Weber.

His only major role since Studio 60: Sleepy Hollow, just like Steven Weber. He played Benjamin Franklin. In my mind, when the two showed up on set, they walked arm-in-arm and sang “The Boys Are Back in Town” while in Revolutionary War gear. This has nothing to do with Bragging Rights, but I just really wanted to tell that story.

2006 was a peak time for Felicity Huffman. She was coming off an Emmy win for Desperate Housewives and nabbed a Golden Globe for her role in Transamerica. On the Studio 60 pilot episode, Huffman was the host of the SNL-style show. Which made sense. Because she was so famous. Apparently, Desperate Housewives stayed on the air for six more years, which I guess is something to brag about. But that has really been it. She has a big future role on the horizon with the upcoming drama American Crime, but, again, that’s the future, one filled with uncertainty, one typically followed by a Studio 60 alum’s show getting canceled before Cinco De Mayo becomes Thanksgiving.