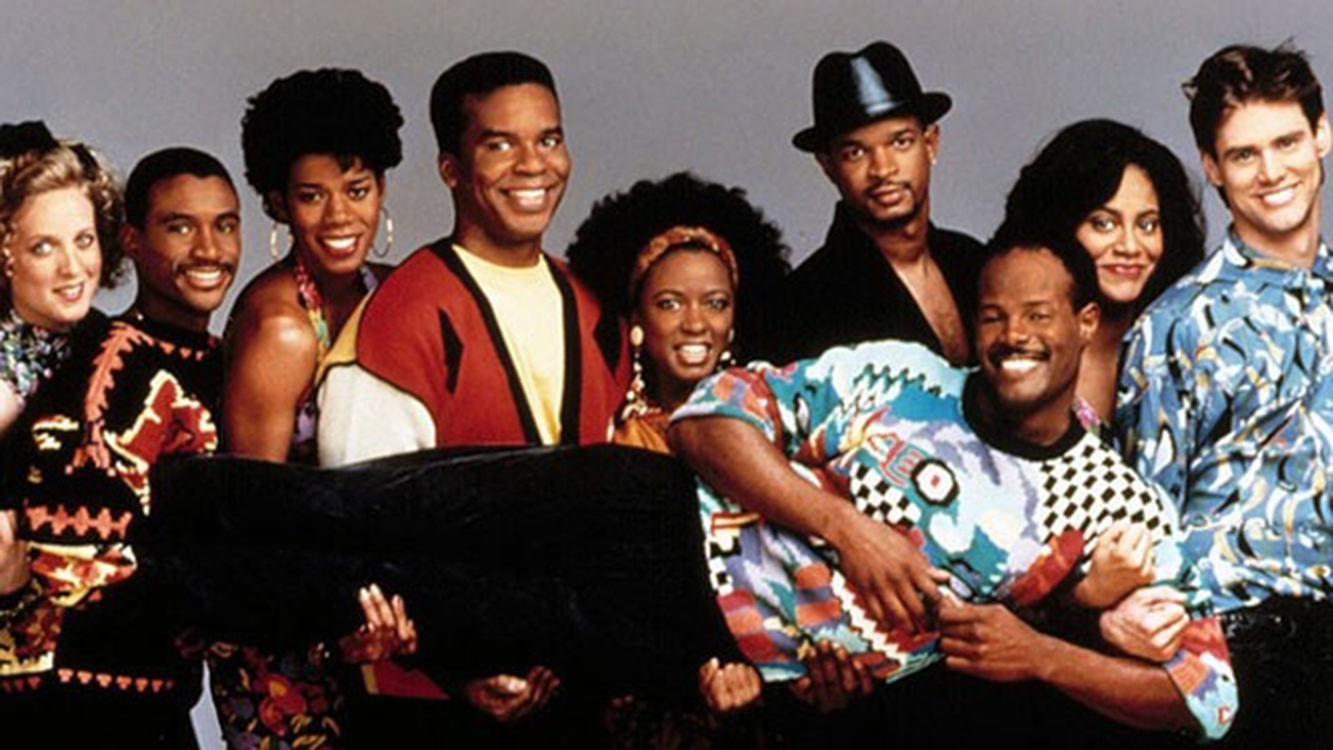 Bragging Rights is a series with a single goal: to determine which member of a cast, a team, a band, or a presidential cabinet is killing it the most, years later. Our writers will take turns giving their takes on who has the bragging rights from the posse of their choosing. In this installment, Sean McIndoe reexamines one of the great upstart comedy shows of all time: In Living Color.

Twenty-five years ago today, the Fox Broadcasting Company debuted a new half-hour sketch comedy show. It was created by Keenen Ivory Wayans, with a cast largely made up of his family members and various unknowns, and it was unlike anything audiences had ever seen on prime-time broadcast television. It was called In Living Color, and it was brilliant.

By law, any American sketch comedy show must be compared to Saturday Night Live, so let’s get that out of the way right now: From the moment it debuted, In Living Color was roughly 10 times funnier and at least 100 times cooler than SNL.

Remember, this was 1990, right at the end of SNL’s Jon Lovitz–Nora Dunn era, which is to say that the show was a perfectly serviceable comedy program aimed mostly at grown-ups. It was good. It was fine. But this was before Mike Myers took over and Adam Sandler and Chris Farley showed up. If you were under the age of 30, SNL just didn’t have much there for you. Then In Living Color materialized, with an in-house DJ and dance troupe and a mostly black cast, and suddenly “Well, isn’t that special?” didn’t seem so cutting-edge anymore.

Some of In Living Color still works today; other parts, not so much.1 But at the time, the show felt different and subversive and hilarious. What we didn’t know was that it would also produce an almost ridiculously long list of future pop culture stars. In Living Color didn’t have a long run; technically, the show lasted five seasons, and the last one doesn’t even really count, because there weren’t any Wayans brothers and only a handful of the original cast was still around. But in just the four years it was on the air, you could make an excellent case that In Living Color produced more star power than any era of Saturday Night Live short of the original Not Ready for Prime Time Players.

But who ends up with bragging rights? Before we get to the top three, let’s count down the honorable mentions, in roughly increasing order of future prominence.

Tommy Davidson — One of the only cast members to perform in all five seasons, Davidson went on to appear in various other film and TV roles, maybe most notably as the voice of the dad on The Proud Family.

Anne-Marie Johnson — In addition to various other roles, including a stint on Melrose Place, she was vice-president of the Screen Actors Guild from 2005 to 2010. She ran for the presidency in 2009 but lost.

Alexandra Wentworth — Wentworth appeared from 1992 through 1994. One year later, she played Jerry’s girlfriend in Seinfeld’s Soup Nazi episode. She was also in Jerry Maguire and Office Space, and is married to George Stephanopoulos.

David Alan Grier — Grier was a successful dramatic actor before appearing on In Living Color. In the years since, he’s returned to Broadway with several productions while also making appearances on TV and film in various comedy roles. Somehow, he also managed to host Saturday Night Live once.

Heavy D — Already a successful rapper by the time In Living Color debuted, Heavy D contributed two different themes for the show, both of which are generally considered to be among the best five songs ever recorded.2 He went on to add acting to his résumé, in addition to continuing his music career and getting name-dropped on “Juicy.” He died in 2011.

Kim Coles — An original In Living Color cast member, she went on to become best known for her starring role on the Queen Latifah sitcom Living Single. If it was the early ’90s and you wanted to make a TV show that had the word “living” in the title, Kim Coles was your first phone call.

Molly Shannon — Before her long run on SNL, Shannon made a handful of appearances on In Living Color.

Larry Wilmore — Wilmore was a writer on the show but never had much screen time (although his brother Marc was part of the cast). Earlier this year, he replaced Stephen Colbert on Comedy Central with The Nightly Show.

Damon Wayans — A former SNL cast member3 and the creator of In Living Color’s best recurring character, Homey D. Clown,4 Wayans spent much of the mid-’90s balancing a stand-up career with reasonably successful films like Major Payne and Blankman, and then found sitcom success on My Wife and Kids, which he created and starred in.

Carrie Ann Inaba — I’ll admit that I’d never heard of this person, but she’s apparently a judge on a show called Dancing With the Stars that my wife says I should pretend to be vaguely familiar with if I’m going to write stuff for a pop culture blog. Inaba was also one of the original Fly Girls, the show’s dance troupe. They’ll come up again.

Keenen Ivory Wayans — The show’s creator and host, Wayans went on to a successful career as a director of films, including several starring his brothers. He also briefly hosted his own talk show in the late ’90s, but who didn’t?

Shawn Wayans — Originally the show’s DJ (billed as “SW-1”), he’s since gone on to team with his younger brother Marlon to make films like Scary Movie and White Chicks that get terrible reviews but make lots of money.

Kelly Coffield — A seasoned comedic actress who could play just about anything, Coffield was basically the Phil Hartman “glue guy” of In Living Color’s early years. She went on to appear in various movies and a couple episodes of Seinfeld, which may not seem like much, but screw you, because I was basically in love with her in 1991, so I will rank her as high as I damn well please.

Rosie Perez — Perez was the Fly Girls’ choreographer for the show’s first three seasons. During that time, she landed her breakout role in White Men Can’t Jump, which came out in 1992. She’s now one of the hosts of The View.

Chris Rock — By 1993, In Living Color was so much cooler than Saturday Night Live that Rock basically quit SNL to join the competition. He went on to become one of the biggest stand-up comedians in the world, not to mention a reasonably successful movie star.

That’s a hell of a lineup for a relatively short-lived show. But we’ve still got the big three to get to.

It has to be J.Lo, right? She joined the show in the third season as a member of the Fly Girls, stayed until the end two years later, and then went on to become just about the biggest celebrity in the world. No big deal, really. Here she is making her In Living Color debut.

You know what came next. Her big breakthrough happened in 1997 with Selena, “If You Had My Love” came out in 1999, and next you thing you know, Puff Daddy is following her around and she’s running the world, right up until Gigli.

But would any of it have been possible without that breakout role on In Living Color? Well … yeah, probably. There’s just no stopping some people. But we can still say we knew her way back when.

Jim Carrey (or “James Carrey,” as he was originally known) was unquestionably In Living Color’s first big breakout star. He created some of the show’s most memorable characters, including Fire Marshal Bill and Vera de Milo. He also used the show’s patented musical parodies to pretty much single-handedly kill off the career of the world’s biggest pop stars, but we all agreed to pretend that era never happened.

Carrey’s rise to full-fledged stardom came even before In Living Color went off the air, when Ace Ventura: Pet Detective hit screens in February 1994. It was an unexpected hit and the first leg in a ridiculous three-movie package that also included Dumb and Dumber and The Mask, which all came out in 1994 and added up to one of the single best box-office years any actor has ever enjoyed.

Carrey stumbled a bit with Batman Forever, and The Cable Guy wasn’t for everyone, but there wasn’t a more bankable comedic actor in the mid-’90s. He then went through the mandatory “funny guy tries to prove he can do drama” phase, and kinda-sorta pulled it off with movies like Eternal Sunshine of the Spotless Mind before eventually making his way back to the Dumb and Dumber franchise last year. He’s not the marquee name he once was, but considering it’s been two decades since he was at his peak, he’s had a pretty remarkable run. And it all got started with a fireman who wanted to show you something.

Here’s how ridiculous In Living Color was: In 40 years, no former full-time SNL cast member has ever won an Oscar. Not one. And yet the In Living Color cast member who went on to win Best Actor — oh, and a few Grammys to go with it — manages only to take home the bronze. Yeah, this was a tough field.

Foxx joined the cast in Season 3 — you can see him being introduced in that J.Lo clip up above — and quickly became one of the show’s stars, impersonating Prince and squaring off with Tupac. But he was probably best known for Wanda, the nontraditionally beautiful lady who never quite found that love of her life.

Foxx got his own sitcom in 1996 and went on to a movie career that included a film in which he listens to the greatest motivational speech of all time. He has also dabbled in music as both a performer and a producer.

In 2004, he became just the 10th person (and third man) to pick up two Oscar nominations for acting in the same year,5 earning a supporting nod for Collateral and a Best Actor nomination for Ray. He won the latter, then disappointed millions by not crossing his eyes and whispering “I got you” to the statue during his speech. To this day he’s still killing it in films like Django Unchained. He also occasionally wins Grammys with Kanye, because why not.

For just about any other show, that would make him an easy choice for the most successful alumnus and it wouldn’t be close. On In Living Color, it’s good for a solid third place, because this show was that loaded. And that’s pretty hard to beat, even if you’re twirling a sock full of pennies.