Jenny With the Schlock: ‘The Boy Next Door’ and the Depowering of J.Lo (Plus: The Middling ‘Mortdecai’) 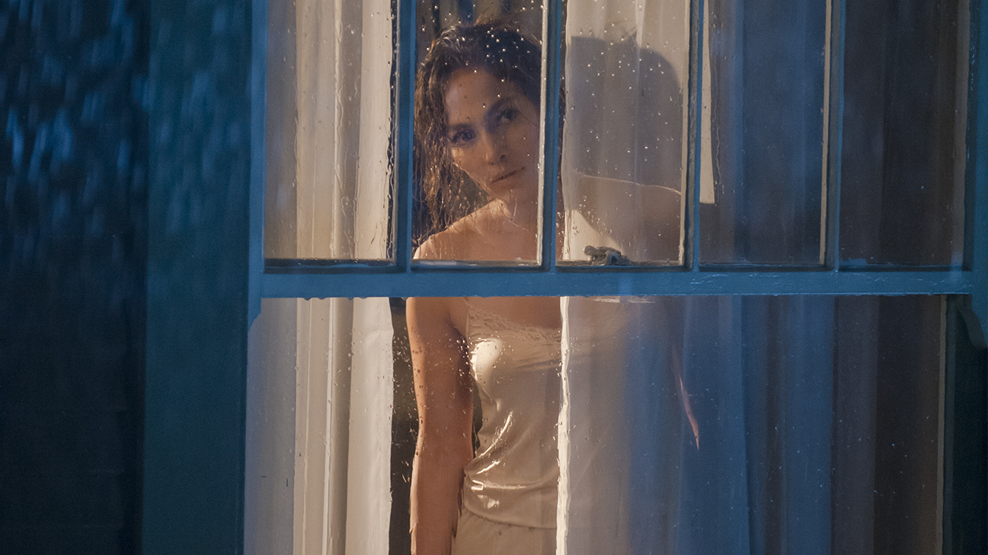 In the privacy of my home, with only my wife around to fact-check me, I’ve been known to refer to Jennifer Lopez as “multi-untalented.” Obviously, this isn’t fair — and not just because the ability to weather nearly 20 years of marketplace caprice is a talent in itself, if not a superpower. But Lopez’s professional identity has long been one of pop culture’s most fascinating shell games. For a fly girl, she turned out to be a pretty good actor. For an actor, she was a pretty good singer. As a singer, she sure can dance. This is the remaining-famous equivalent of using your Visa card to pay your Amex bill, of pulling off the rate-card trick in life’s casino. Her last truly great movie came out the year Jaden Smith was born; her last truly great single was the no. 1 song in the country on 9/11. (Never forget.) And yet she’s still undeniably and irrevocably a star, hyperbarically dewy after all of these years, outmaneuvering and outlasting the collaborators who supposedly prop her up. Where’s Ja Rule today? Where will Iggy Azalea be tomorrow? As long as there are awards telecasts in need of wattage, there will always be a J.Lo, and whether or not she wins anything, she’ll always walk away with the show.

As a song, 2014’s “Booty” felt almost algorithmically calculated, a painstaking and desperate Pinterest board of outsourced ideas — strike-a-pose finger-snaps, off-brand “Drunk in Love” snake-synths, irritant-of-the-moment Azalea replacing Pitbull on the remix and sounding, as always, like a tipsy Gwyneth Paltrow doing Jay Pharoah’s Jigga. In Hype Williams’s let’s-get-unitarded video, Lopez and Azalea form a callipygian yin-yang, and then Lopez slides around in what appears to be a torrent of Astroglide. As a piece of music, “Booty” is disposable; onstage at the end of the American Music Awards in November, Lopez put it over like “Proud Mary.” The spotlight dance! The planet-size disco balls! The red glittery tux jacket! The salsa horns repurposed from “Let’s Get Loud”! At the end, after letting an onstage booty call (from one “Big D”) go straight to voice mail and shaking that iconic tailfeather in America’s face for five long seconds, she said, “Shut it down,” and then held the ABC camera’s gaze with the coldest are-you-not-entertained stare imaginable. 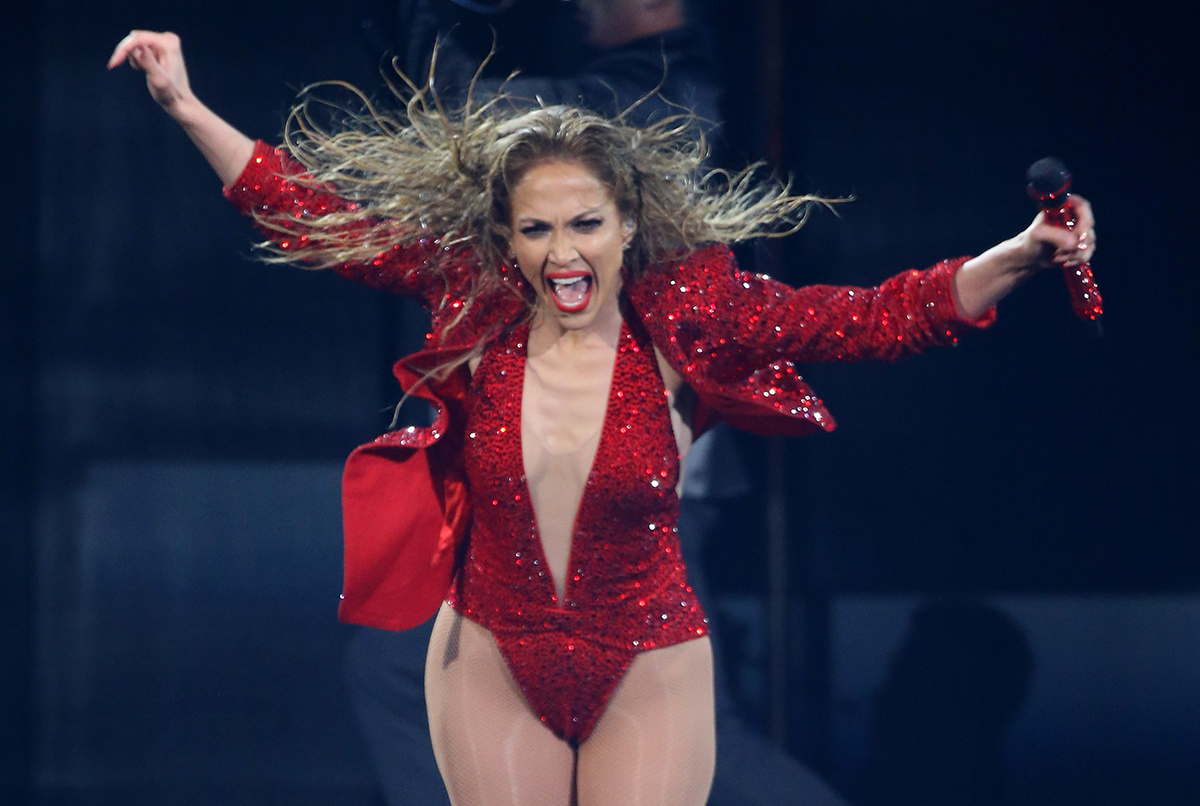 The striking thing about that last shot is how much she looked, suddenly, like a 45-year-old woman who’d just done four straight minutes of hard cardio and wanted us to know it. I was indeed entertained; I also felt like I understood her enduring appeal/appealing endurance in a way I never had before. If what you value in pop is spontaneity, sudden impact, inspiration, risk, taste, freestyle quicksilver, and lack of fucks given, you’ve probably already figured out that J.Lo is not singing for you. She’s a show-your-work pop star; visible effort is crucial to her brand. You can’t really emulate a Björk or a Beyoncé without being born a world-beating genius, but if you’re willing to hustle, to be about your business, you could maybe be J.Lo, who wasn’t born with it, either. It’s why even as American Idol spins farther and farther away from the sun, she’s thrived as den mother and Glinda the Good Cop to the show’s parade of spunky strivers. Don’t be fooled by the metaphorical rocks, kids — she’s a striver, too, and therefore the ideal face for a show whose eternally suspect thesis is that success accrues to those who want it the baddest.

None of this really explains why Lopez’s first feature film since 2013’s Parker is The Boy Next Door, an anemic thriller dumped into the snowy wasteland of January’s release schedule by the frugalists at Blumhouse Productions. She’s Claire Peterson, a high school English teacher who’s raising her teenage son, Kevin, after kicking her cheating husband (John Corbett) to the curb. When hunky Noah (Ryan Guzman, from Pretty Little Liars and the fourth and fifth installments of the Step Up saga) moves into the house next door to care for his ailing uncle, it’s Kevin who befriends him first, but before long Noah and Claire are bonding over their shared love of ancient Greek literature. “Dude,” Noah says to Kevin, “you gotta read the Iliad,” then proclaims Homer “a genius, just like Shakespeare, Byron, Zeppelin, Dylan.” Claire, practically swooning, replies, “Poets.” Later, he brings her a copy of the Iliad from a garage sale. “This is a first edition!” she exclaims. (Of the Iliad? Where was this garage sale, the 1400s?) And wouldn’t you know — the bedroom where Claire studies the classics in stylishly cleavage-y loungewear and smart-person-in-a-movie reading glasses has a window that faces Noah’s room. She watches him undress; a few scenes later, he’s undressing her, talking in movie-poster copy (“No judgments … no rules … just us”) while Lopez makes little appreciative/reluctant meow-meow sex noises, just like in the Iliad. 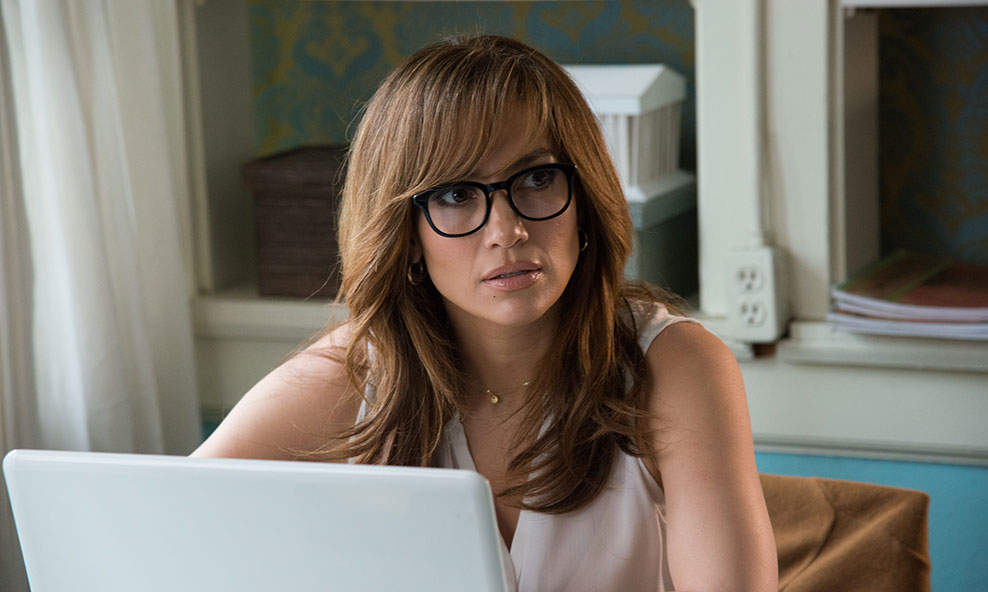 The director is Rob Cohen, resurfacing for the first time since 2012’s gallopingly dumb Alex Cross; the screenwriter is first-timer Barbara Curry, whose story sacrifices psychological intrigue to preserve Claire’s likability (and Lopez’s). It’s established early on that Noah, having missed some school due to the deaths of both his parents, is nearly 20, which means their night of passion isn’t against the law. Since Claire and her husband are separated, she’s only kinda-sorta breaking her marriage vows. And while he’s a high school student and she’s a teacher, she’s not his teacher, at least not yet. Recall that in Fatal Attraction — still the gold standard for movies like this — Michael Douglas’s character is happily married but decides to have a weekend of gauzily backlit Adrian Lyne sex with Glenn Close because “the opportunity was there.” He’s deeply complicit; he doesn’t quite deserve what happens afterward, but he doesn’t not deserve it, either. This movie won’t risk us turning against J.Lo, even for a second; by the time Noah’s I-won’t-be-ignored campaign escalates from Eddie Haskell–ish double entendres to harassment, violence, and calling Kristin Chenoweth the c-word, Claire is inching toward a reconciliation with her husband, turning this into a story about a nuclear family fighting off an external threat. I’m not seriously going to suggest this movie would have been better at two hours than it is at 91 minutes, but it leaves a lot of drama on the table by immediately making Noah into a glowering monster — by the end of the movie he’s basically a Terminator — and Lopez a pure victim.

You always have to wonder why anybody says yes to a project like this one, but it’s a particularly strange choice on Lopez’s part, since she’s done her best work in movies that dare to empower her. Seventeen years ago, in Out of Sight, Lopez’s U.S. Marshal Karen Sisco beat down Isaiah Washington with a few strokes of a telescoping baton, then had technically immoral sex with George Clooney, a decision for which the story didn’t punish her. Michael Apted’s Enough, from 2002, was nowhere near as good, but there was real pulp satisfaction in watching Lopez master Krav Maga in order to kick her abusive husband off a balcony. Sometimes a little smartly executed dumb action is all it takes to turn a career around and put an actor back in touch with his or her strengths; I’m guessing Lopez won’t ever risk her brand by working with Lars von Trier, but can’t someone write this woman her own John Wick? 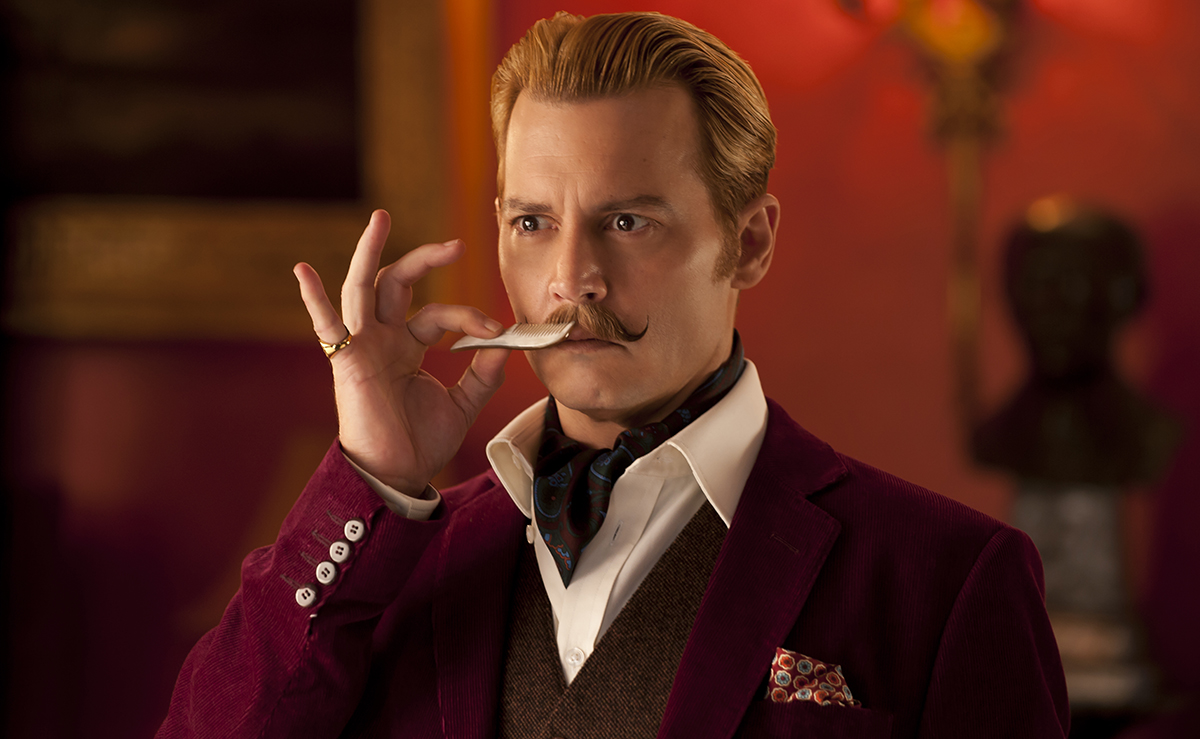 A few weeks ago, The Interview brought us to the brink of all-out cyberwar with North Korea; if England’s hacker community has any national pride, we should brace for a digital 1812, because Johnny Depp’s performance as an upper-crust twit in Mortdecai is Britface at its most slanderous. He’s Lord Charlie Mortdecai, a gentleman art dealer and upper-class fop who’s alienated the affections of his clearly long-suffering wife, Johanna (Gwyneth Paltrow), by growing a stupid mustache. He’s also facing a staggering income-tax bill, so when an MI5 agent (Ewan McGregor) seeks his aid in locating a purloined Goya, he can’t say no. In Kyril Bonfiglioli’s four cult-beloved Mortdecai novels, Charlie and his manservant Jock are allegedly a more dissolute Wooster and Jeeves.

I haven’t read them, so I can’t speculate on whether the boner-and-barf gags in screenwriter Eric Aronson’s adaptation represent a betrayal of the source material or fealty to its spirit. It was Bonfiglioli who gave Jock the last name “Strapp,” so it’s hard to say for sure. I suppose if you get really hammered on English gin beforehand, Mortdecai will play like a wry Old World–meets-modernity comedy in the spirit of The Grand Budapest Hotel; seen straight, it’s an utterly disposable but surprisingly dirty adult-oriented farce that will rise or fall for you based on how willing you are to watch Depp mug and mince for 106 minutes like a tribute-band Peter Sellers. Everyone else mostly stays out of his way, with the great Jeff Goldblum and the increasingly tolerable Olivia Munn particularly squandered as an American billionaire and his deceitful horndog daughter. Mortdecai isn’t particularly funny, but it’s also not the Pistachio Disguisey 2015 train wreck the Internet has spent the last few months anticipating. It’s brainless, but it’s painless.