Adele, Adele: Why Her VMAs Performance Was a Disappointment 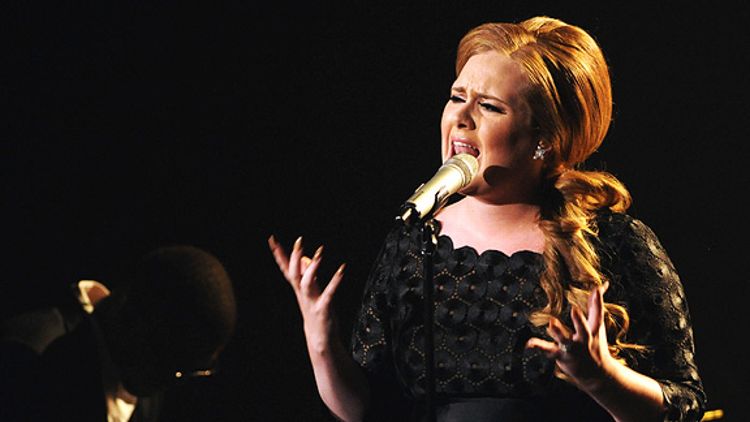 On Sunday night at the Video Music Awards, Adele walked onto a bare stage, stood next to a piano, and sang what was supposed to be a stirring rendition of “Someone Like You.” The Internet immediately declared the performance the victory of the night — our new favorite songbird had finally taken the roost she deserves. And for the most part, the Internet was right. Adele did deliver on what the public has grown to want out of her — a sleepy pigeon affect, dark, heavy eyelashes, a downturned gaze, subtle (but earnest!) hand motions, Fructis’d hair, and that throaty, searching contralto. But while Adele fulfilled her end of the deal, she did precious little else. There was no ambition in that performance, no sense of danger or discovery. And in the end, it was hard to see it as anything more than a wasted opportunity.

Last year, I created a mathematical system for rating Divas to settle an argument about Whitney and Aretha. Female solo singers were rated on weighted categories. In a controversial turn of events, Whitney edged out Aretha by a 1248-1220 score, mostly based on the strength of her “Star Spangled Banner” performance during the Super Bowl.

Here’s how Adele rates out. The scale is in parenthesis.

TAKING THE LISTENER ON AN EMOTIONAL JOURNEY (300): Adele rates as a 180 here. That’s pretty damn good for a 2123-year-old. That being said, I’m not sure if she has much room to grow, though, as her voice seems limited to sad, lonely songs. I don’t know if Adele could follow “Someone Like You” with a rousing “Chain of Fools” or “The Weight.” She can definitely make you feel awful about a mean boy, but can she restore your faith in yourself? Aretha could. So could Whitney. Mary J. has that gift, as does Streisand. Adele’s short, for now.

PURE VOICE (300): 230. This is Liza territory, but doesn’t quite reach the Babs/Dion/Mariah tier.

UPSTAGING PRESENCE (80): 20. She just doesn’t have the killer instinct. Like, if there were “We Are the World III: A Benefit Concert for the Victims of Hurricane Irene,” I bet Adele would defer to Miley. And Katy Perry.

HAND GESTURES (80): 10. Not there yet. She moves like Steve Forbes did when he was explaining the flat tax.

AGING INTO A DRAG QUEEN/WEARING INSANE HATS (30): 0. Again, this will come with age. Especially with her Hedwig and the Angry Inch-styled makeup.

That’s an 815, which, at the age of 21 23, already puts Adele right about two good albums, one iconic performance, two weight fluctuations, and three fucked-up hats away from the Gladys Knight/Mary J. tier. With years to accrue all these things and more, Adele has the potential to end her career somewhere in the Streisand zone.

To reach for that nose, she needs to go through something worse than a “breakup,” rebound, expand her vocal range, and put out at least two curveball hits (preferably covers in the mold of Whitney’s “I Will Always Love You”). But more than anything, she needs to have a Winehouse-at-the-Grammys moment in which she expands the public’s perception of what she can and cannot do.

At the VMAs this past Sunday, the stage was perfectly set for the first of these iconic moments. The rest of the show was split between Lady Gaga and Winehouse, the two singers sitting squarely in Adele’s path. When Gaga’s one-woman play bombed (didn’t it feel like Gaga was brushing off some terrible idea she had back in some theater class at NYU?), it should have marked the last, desperate flailings of her doomed reign as the world’s pop star. Had Adele sang a cover, like, say, “As Tears Go By,” “Son of a Preacher Man,” “Play With Fire,” or Fiona Apple’s “I Know,” she could have buried Gaga, scored upstaging points, and taken her first meaningful step toward Divadom. Instead, she chose to replicate — hand motion by boring hand motion — a performance she gave on the Jools Holland show.

The two performances are embedded below. See if you can tell them apart.

In Video 2, Adele’s hair is parted to the side. The lapels on her black dress have been replaced by octagonal ruffles. In Video 1, she keeps her hands clasped around her belly for a solid 90 seconds. In Video 2, she unclasps her hands at the half-minute mark.

Outside of that, the performances are pretty much identical, which, had this happened before YouTube, might have gotten her to about 40 percent of where she needed to be. But everyone has already seen Adele sing this song with the same styling. And although there’s certainly no way to discount her vocal talent, her polish and her presence, as I watched I couldn’t help but think that she was treading water. Maybe this is a better way to put it: I went to the VMAs, mostly because I wanted to see Adele perform. When I left three hours later, two things had left an impression on me. The first: Bruno Mars. The second: A seat-filler who had sewn angel wings onto his white leather pants. The fact that Adele, whom I like very much, couldn’t supplant a creatively tailored pair of trousers doesn’t necessarily doom her to the “two-good-albums” status (Sinead Zone), but it brings up legitimate concerns about whether or not she can grow as an artist. If this version of very nice, very digestible Adele continues on its current trajectory, she will sputter out somewhere in the Kelly Clarkson range. This isn’t a terrible fate — certainly, you can do worse than being the girl who perfected (or pop-ified) a sound and then replicated it for the better part of a decade. But given Adele’s talent and the universal goodwill she’s accumulated over the past year, we should expect something more than where she has currently stalled — somewhere along the boring, windswept median between Fiona Apple and Norah Jones.

Jay Caspian Kang is an editor at Grantland. His debut novel, The Dead Do Not Improve, will be published by Hogarth/Random House in summer 2012. Follow him on Twitter: @jaycaspiankang.