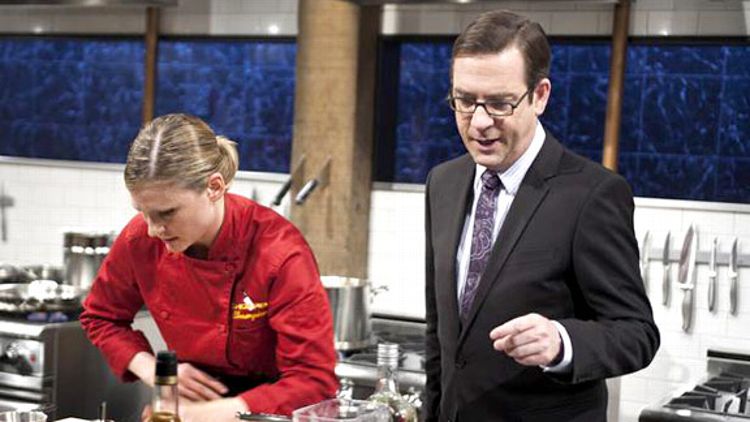 What are Grantland editors watching, eating, and removing scuff marks with this week? (YouTube Hall of Fame will return next Wednesday.)

Dan Fierman: Chopped (Food Network)
As an American who appreciates the culinary arts and the importance of not allowing Guy Fieri to believe he’s famous any more than is absolutely necessary, I have long since abandoned the Food Network. It was sometime after Good Eats lost its luster, and we collectively realized that the American Iron Chef had screwed up everything in translation, that I ditched. My food time went online, or to the more upscale dispensaries of middlebrow reality TV, like Bravo and Travel Channel. Places that built entire series around gluttony and horrible interpersonal behavior … but, you know, in a classy way.

Yeah. I’ve been out on Food Network. Then comes this damned show.

The premise of Chopped is as simple as it is stolen. Start with four chefs, almost all of them from a swath of mediocre and mysterious outer-borough restaurants. Hand them a basket of mystery ingredients. Give them a time limit. A pantry. A panel of bitchy judges and cook cook cook judge judge judge vote vote vote. There are tears. There are meltdowns. There is a victor. And then the next week, we do it all over again.

If Top Chef is a shipping truck full of Sudafed, Chopped takes that truck and cooks it down into Heisenberg-quality methamphetamine. Try it once, food lunatics. I dare you. That shit is blue, addictive, and the only things it’s missing are the glories of Padma Lakshmi and her spectacular cleavage. Just for your own sanity, be sure to change the channel once it’s done.

Chuck Klosterman: Mr. Clean Magic Eraser
I have a tendency to walk into walls. It’s true. I probably walk into three or four walls every day. The reasons for this are varied, but the result is always the same: I hit the wall, and the wall gets scuffed. My apartment constantly looks like the den of a clawless badger. But I’ve found an incredible way to combat this — Mr. Clean Magic Eraser. Now, I don’t want to seem like a shill for Proctor & Gamble, so let me first say that I have no relationship with the company and (for all I know) this product might give you brain cancer. But it would probably be worth it. These things are astounding. It’s a little sponge that — when you get it wet — excretes this chalky white liquid. And when you rub this damp pad over a scuff, the scuff literally disappears. Yes, I did write literally. As in, “poof.” It’s just instantly gone. Every time I use one of these pads, I’m amazed. Don’t sleep on this. It will make you want to walk into walls.

Michael Weinreb: Artisan Pickles
Some men cheat on their wives with prostitutes, and some men cheat on their wives by shooting off-kilter portraits of their boxer briefs and posting them on social-networking sites. Here is the most shameful secret that my wife is unaware of: The other day, at one of those Brooklyn supermarkets where they sell 73 types of extra virgin olive oil and spoiled children on Razor scooters bogart an entire tray of Manchego samples, I purchased a jar of locally manufactured, gourmet pickles for $9.99. And I’m not going to fib: These pickles were otherworldly, inasmuch as the taste of cucumbers fermented in vinegar can serve as a transformative experience. I may go back and buy them again. I may even reach out to other artisan pickle makers to let them know I am willing and available. And if my wife notices the charges on our credit-card bill, I will assure her that our account has been hacked.

Molly Lambert: http://users.hal-pc.org/~questers/HolyGrailQuest.html
This website is either from 1998 or THE FUTURE UNKNOWN.

Katie Baker: SodaStream
Pound for pound, the two most passionate groups of people in the world are (a) those who despise cilantro and (b) those who NEED THEIR SELTZER AND NEED IT NOW. Luckily, being the burrito enthusiast that I am, I only fall into Group B. Still, it can be a crippling affliction. A day without seltzer is a day I want to die. I hold lifelong grudges against places that don’t stock the restorative elixir. That random gas station in Rhode Island? Never again.

When I heard about the SodaStream I was skeptical, with visions dancing in my head of the strange 70’s-style contraption in my parents’ house that involved bullet-like CO2 capsules and has only once been used. But I finally obtained one, sick of lugging multiple two-liter bottles several blocks, and my world was changed forever. No longer must I crawl dry-mouthed and army-style to a faraway bodega on those hungover mornings when plain old water just won’t do. No longer must I pay four bucks for a lonely can of Red Bull. No, from the comfort of my home and in the comfort of my jammies I can make effervescent beverages to suit my every changing whim. (As well as constant whims like Maker’s Mark and ginger ale.)

If you’re reading this and shrugging, the SodaStream is not for you. But if you’re one of us, you’ll know it — and now you know just what to do. In no time at all you’ll become the kind of person who says things like “I use four buzzes to get my fizz on” without a trace of irony. And when you do, I’ll raise my glass of delicious seltzer in your honor.

Sarah Larimer: Skittles Beer
I was raised in the Midwest by good Catholic parents who sent me to a good Catholic school. They made me go to church every weekend and (as I recall) they sometimes threatened me with a trip to confession if I misbehaved. It’s too bad they put so much time into that, because for the past year, I basically spent almost every Sunday in a bar. Specifically, I used to frequent the best bar in Washington, D.C. — the Tune Inn. I was introduced to the Tune by my buddy Dave, whose picture was posted up on the wall there. Dave also introduced me to my Tune Inn drink of choice — the Skittles beer.

Skittles Beer is exactly what it sounds like. A beer … with a Skittle in it. Here is what happens when you put a Skittle in a beer: The beer fizzes up. The Skittle starts to dissolve. Your cheap-ass beer tastes a little bit better. (Maybe? That part might be debatable.) Your friends laugh. All in all, a pretty good addition to your Sunday night, right?

I e-mailed Dave on Tuesday and asked him about the origin of Skittles beer. Here’s what he wrote:

“Heh. It’s not all that original: It comes from The Simpsons. A Homer creation, conceived at the Kwik-E-Mart. … It’s the easiest way I know to turn your PBR into a Blue Moon.”

Who knew? Not me. We were not allowed to watch The Simpsons.

Patrice Evans: Ghetto Sangria. Tinto de Verano. Red Wine Spritzer.
The most fail-safe summer drink concoction ever concocted is not only delicious and refreshing, but comes with an assortment of names to suit the crowd you’re rolling with. No matter the name you choose it’s one part red wine, poured over ice, mixed with one part citrus soda. That’s it, voilà, presto drunko: Prepare to be the most interesting man or woman in the world (stay thirsty, my friends). You can tinker with the wine-to-soda ratio. Also feel free to experiment with the choice of wine (cheaper tends to be better, not just for money reasons), and the citrus soda selection (Sprite, Fresca … La Casera is what they use in Spain). I’ve been partial to an economical-but-delicious Le Grand Pinot Noir paired with a Sprite Zero blend for summer 2011. It’s a gateway drink for wonderful writing! Thank me now. Thank me later. Thank me drunk.

Adele, Adele: Why Her VMAs Performance Was a Disappointment