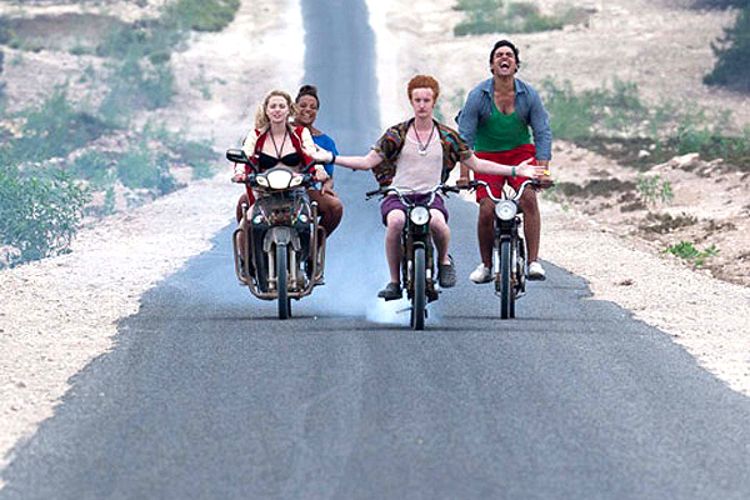 Early last year MTV attempted an adaptation of Skins, the hit British teen soap. It brought in Bryan Elsley, who co-created Skins in 2007 with his then 21-year-old son Jamie Brittain, as showrunner, and he brought in the original’s trademarks: a writing staff of mostly unproven teens; a starring cast of mostly unknown teens; and boatloads of debauchery and sex. It failed, miserably. Partially that was because, as many predicted, teenagers disrobing and popping pills did not go down as easily Stateside as it did in the U.K.; the Parents Television Council flipped its shit over perceived “kiddie porn,” and bullied a gang of advertisers into canceling their placements. The other problem was that the U.S. Skins wasn’t particularly good. The actors were stiff; the storylines and characters, many cribbed from the first iteration, cringingly unrealistic. Considering Elsley’s track record you could believe the show would have developed into something watchable eventually, but when MTV bowed to the pressure and put it to sleep after one season, it made the humane decision.

I’m actually in the minority, among die-hards, when it comes to appreciating latter-day Skins as much as the early days. The show is suffering a rating drops that (according to the Internet) has to do with the relatively softer edges of Season 5, which featured lots of crack-ups and over-consumption but didn’t quite reach the life-threatening nutso plot lines of years past. If that’s the case, then, it looks like Season 6 might be more in line with expectations.

We find the guys and girls on vacation in Morocco, raging, whooing, whipping motor bikes in the desert, and shacking up in a busted-up villa with no running water but lots of randomly discovered weed. It turns out the drugs belong to a creepy British Bret Easton Ellis-lite character who’d been using their vacation spot as his stash house. To make up for the rotten misunderstanding, he politely invites the crew over to a beach party, wonderfully DJ-ed by a fellow wearing a blazer, a dress shirt buttoned to the top, and shorts. But, oh no! It’s all a ruse to entrap the gang into a drug-smuggling operation! The DJ has stashed some yayo in their jeep, and unless Matty — a troubled, sensitive lad — drives the stuff to Marrakech, British Bret Easton Ellis guy will seduce his girlfriend, Frankie, a former-shunned-weirdo now blooming-into-her-own type (she’d already been tired of Matty; they’d just spent some time in Tunisia, and he just kept on going on about Simone de Beauvoir and Morrissey). Long story short, Matty has to engage in a high-speed car chase to stop Frankie from running off with the villain, and accidentally crashes in the process — leaving Grace, the opera-singing, ballet-dancing good girl, in a coma. Back home in Bristol, the crew is all torn up, and Matty’s on the lam.

Wait. That actually makes this show sound totally dumb? OK, let me try to explain. Skins is all about wild swings from one pole to the other. On the one hand, we get bonkers wish fulfillment: constant access to pills and booze, an endless array of unsupervised sweaty dance parties, lots of mean hot chicks with unabated desires for clueless nerds. On the other, world-shattering tragedy: arrests, torture, brain damage, suicide, murders. And in between, all manners of preposterousness: low-simmering gang warfare settled over chili-pepper eating contests, a guy farting into a loudspeaker, that kind of thing. Coherence, or pragmatism, is not its strength. I mean, it’s actually written by teenagers.

In an (overall positive) review of the American version for New York magazine, Emily Nussbaum wrote that “No sane person would compare Skins (either the British or the American version) to Freaks and Geeks, My So-Called Life, or Buffy the Vampire Slayer, the last decade’s trifecta of game-changing teen shows. It is neither subtle nor especially original. But that doesn’t mean it has no life in it.” Without discounting that very worthy trifecta (and without coming off as, you know, INSANE AHHH!!!), I’d argue Skins has a leg up here precisely because it’s not subtle.

Lack of subtlety is not, of course, solely the domain of Skins. Lack of subtlety, from The O.C. to Gossip Girl to whatever the person who runs the CW is green-lighting as you read this, is a teen show must-have. The difference is that Skins’ lack of subtlety is used to a different end. The underlying concept is that this is a teen show as seen from the point of view of those excitable teens (and, again, as written and acted by them). That’s why every adult is so horrendous, why each party feels so epic, why every heartbreak is so crushing. Freaks and Geeks is a wonderful show. It’s beautifully paced; its plot lines unfold delicately, its heightened moments are always grounded in reality, its every character development is judicious and well-earned. And it never made me seriously consider buying ecstasy.

It’s not just that Skins is more fun, though. The O.C. was more fun than Freaks and Geeks, too, and I would never argue its relative merits. That show kicked off with a fairly realistic base and then circled the drainpipe as it lopped on the melodramas, a common downward trajectory for teen shows. Skins starts off insane: In the very first episode, the kids crash a party, get into a brawl, try to sell drugs, and crash a car into a river. The level of mania was established from the get-go; it’s an idealized form of teen life, one that constantly whiplashes between triumph and destruction. And underneath all that, the writers get to stitch together their convincing human relationships.

Besides whatever unique qualifications Skins has to claim the teen-TV title belt — the juiced-up rashness, the total lack of sentimentality in dumping characters, the killer soundtrack — there’s also this: Sometimes, the show hits upon some things I’ve never seen on TV before. In the Season 1 finale, Tony, a cocky whiz kid that callously manipulates his friends and his ladies, gets hit by a bus. I’d assumed, based on years of TV viewing, that in the second season we’d either learn Tony had died, or that he had made a full recovery. Instead, we hang around with him as he relearns how to eat with a fork and knife, how to use a pen, how to recognize when someone’s making a joke. It’s tough to watch Tony go from brilliant and jerky to dead-eyed and silent, and was probably harder to pull off. But the actor, Nicholas Hoult (who has now made the jump to Hollywood), nails it: As Tony painfully slowly gets his swag back, we applaud every fumble forward. For my money, Skins has delivered on five seasons of these kinds of goods.

We’re living in a golden era of teen television — not because the stuff that’s on is currently the best of the genre, necessarily, but because we’ve gotten to the point where it’s beyond reproach to be into this stuff. Twilight is almost done being the biggest thing ever, and then Hunger Games gets to come along and be the biggest thing ever. Meanwhile, your friends get cool points for being up on the latest plot twists of Pretty Little Liars. As Nussbaum writes in that Skins review, “somewhere along the way, the line between ‘shows teens watch,’ ‘shows about teens,’ and ‘shows about teens that adults watch’ has utterly dissolved.” That means it’s an increasingly heightened battlefield. But I believe in Skins.