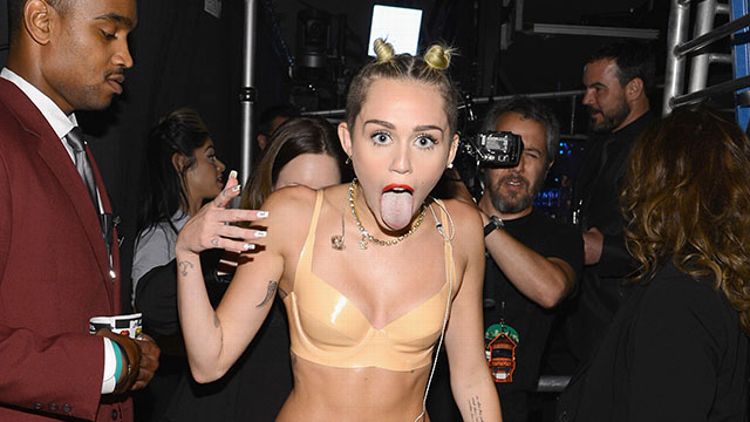 Zero shots to Miley Cyrus, but I’m not entirely sure what else there is to say about her at this point. These are the perils of a purposeful and successful campaign (or, in Miley’s words, “a movement”) to be talked about all day every day by everyone everywhere. She did it. She won. Everything that has transpired in the Mileyverse since the Great Haircut of 2012 has been part of a calculated effort to ensure that, and it’s hard to imagine anyone else being the pop cultural MVP of 2013 (mayyybe Pharrell, who gets a lot of screen time in the doc, and reveals that he personally approved the aforementioned haircut). I think all of us, Miley included, can feel secure in that victory for a second and now start to think about some other things for these next few post-Bangerz months.

If I learned anything from Miley: The Movement, the documentary/infomercial that premiered on MTV last night (an extended cut will be airing this weekend, and there’s also something you can do on Twitter to unlock extra scenes; I don’t know, I’m feeling woozy even typing these words), it is that this girl needs to take a damn nap. Someone once told me, in an effort to get me to CTFD (and, come to think of it, when I was about Miley’s age), that I “wore my shoulders like earrings,” and that’s all I could think of while watching Miley’s bounce from “On Air With Ryan Seacrest” to Jimmy Kimmel Live! to GMA to the VMAs, in a rotating assortment of white midriff-baring tops hanging on her thin frame, every muscle tensed like a wound-up terrier. Miley has said in interviews that she doesn’t know how to take a break from work; I guess that’s what the pot’s for.

Other than that, the hour was mostly rehashing a lot of what we learned in her excellent Rolling Stone profile: She’s a clearheaded, consummate professional, with a very specific idea of the kind of figure she wants to be in this stage of her life. I say “figure” and not “artist” because I think her uncertainty of the latter is what makes her currently streaming and soon-to-be-released album alternately thrilling and inconsistent. Miley’s mother, Tish, talks about being in the studio with Miley while she was working on Bangerz, and how she would record with almost anyone who happened to drop by, even if she had no prior plans to do so. You get the feeling, both from the album and from The Movement, that Miley is trying on everything in her path and seeing if it’s right for her. (Except for collaborations with other female artists. During the Britney Spears segment, Miley makes the somewhat-disheartening comment that she “only wanted one bitch on my record, and that’s Britney, bitch.”) That curiosity and insatiability is what’s been so interesting to watch these past few months, but it’s a growth process, and not a transition from A to B as Miley implies in the documentary. “I was born to become who I am right now,” she says at one point, her every syllable still drenched in an endearing Nashville twang, but being born to become who you are at 20 doesn’t make for a very interesting career trajectory. I think, and hope, that what Miley means is that she was born to have agency over her image and music, which it’s pretty clear by now that she does.

The documentary couldn’t be all chart-toppers and trending topics. There are two “trouble” sequences, the first involving Miley getting sick before back-to-back Jimmy Kimmel Live! and Good Morning America performances, and the second involving a botched entrance at the VMAs (Miley was supposed to exit from a police car; her chauffeur missed the stop where the vehicle switch was planned). In both we see her freak out because of her loss of control, whether it’s over her driver or her immune system. If her new loosey-goosey stoner image seems forced, it’s because it probably is; she’s grown up with people telling her where to walk and how to dress and how to smile in order to sell the most movie tickets and T-shirts, and even though she’s the one calling the shots now, she’s taken on those micromanagerial qualities and directed them back at herself. Tish is ever-present but hardly a stage mom; she’s the one telling Miley to calm down when she worries about hitting a note during a performance. In fact, almost everyone in every scene is telling Miley to relax.

Both of these sequences end with Miley slapping on a smile and walking onstage to murder another performance. That’s become a common image in these MTV documentaries (Demi Lovato and Nicki Minaj have also been profiled recently), and it always reminds you that the subject is at work almost 100 percent of their life, including and especially when they’re just relaxing at home in high-waisted shorts and a wireless mic pack with an MTV camera crew. Miley acquits herself well during the hour, and I don’t mind watching a thinly veiled advertisement for an artist who I like, but I am not, nor have I ever been under the impression that she is in the middle of some kind of personal/professional train wreck, otherwise I might have found this to be a more enlightening viewing experience. Calling the documentary The Movement seems to promise some kind of grand agenda for pop music and art, but Miley’s vision doesn’t extend too far from her own self-image at the moment, nor does it need to; Lady Gaga is proof of that. All in all, no harm done: It was worth the price of admission just to see her talk to her dogs.