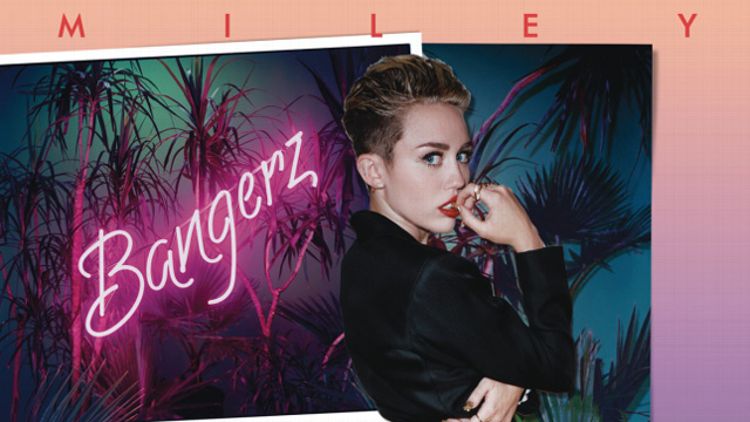 It’s officially October, the United States government is currently shut down, and Miley Cyrus just put out an above-average pop album — three realities no one wants to hear, but that we all have to accept as fact.

I can’t explain where September went. As for the government shutdown, I could explain it, but it would just be a string of expletives followed by the calling out of congressmen à la Kendrick’s “Control” verse.

Miley, however, is something we can, and should, talk about. At semi-length. And now that the stream for her new album, Bangerz, is available on iTunes, the discussion can take place without all the nonsense. Nothing about her VMA performance. Or her interviews. Or her outfits. Or her friends. Or her haircuts. Or the fact that she’s the first woman to bend over and wiggle while looking back at it. None of it.

But, admittedly, it is difficult. It somehow feels irresponsible and naive to just look at her music when behind those songs are an ex-Disney princess who has shaken up America by suddenly hanging out with a crew of black girls, running with a slew of black rappers, and dressing and behaving in an unbecoming manner that has unfortunately been aligned with “black culture.”

But I’m going to try. Because, frankly, if the album is horrible, she might slowly begin to go away, much to the delight of those who feel as if their culture is being co-opted for profit, as well as others who, for the first time, feel embarrassed to be a young white woman.

But if it’s even remotely good, she’s here to stay. Quite similar to career arc doppelgänger Aubrey Drake Graham and his successful reinvention from Wheelchair Jimmy to Young N----, Miley’s transformation from Hannah Montana to member of the East Compton Clovers will have legs if the music infinitesimally suggests that Miley 2.0 is authentic.

Even if, to some degree, we know it’s not.

The hesitation to push play on Bangerz can be seen through this series of digressions, but eventually I did it. And let me tell you, it is something.

When the stream began, I thought I’d accidentally started it in the middle of the album, because the first thing you hear is a single piano note, followed by Miley quasi-torch-singing. And then she launches into the Stacy Barthe–penned “Adore You.” And you’re confused, because an album that ends with a “z” for no reason isn’t supposed to start with a mature song.

So you sit there for almost five minutes and begin thinking things like Wow, Miley grew up and Oh wow, who knew Miley was so romantic? and Am I in love with Miley Cyrus?

And then the second track comes on. It’s “We Can’t Stop,” the first single strongly aided by Mike WiLL Made It’s production prowess. And then you start listening to the lyrics.

And you can’t help but think about the government shutdown again. And then you get mad, because “We Can’t Stop” just became a theme song for stubborn congressmen who keep taking things from we. But then you’re distracted again, this time by the blatant misuse of first-person plural personal pronouns. And then the song’s over. But, like the album title suggests, it’s an undeniable banger.

And then you’re hit with Track 3, and you’re faced with a song called “SMS (Bangerz),” which sounds like an archaic form of push notifications. When you realize it features Britney Spears, you have no choice but to get excited. But then it’s not that great, so you’re sad, because when executed correctly, Britney and Miley on the same track could bring all of radio to a standstill for 12 to 15 months.

After recovering from that letdown, you realize you’ve come to the fourth track and it is Miley featuring Nelly. And you’re tickled at the collaboration, because their careers have flip-flopped: the daughter of the country singer that became a force in hip-hop, and the St. Lunatic that currently might get more love at the CMAs than at Summer Jam. The song is called “4×4,” and it’s pretty silly. It sounds like it got cut from the soundtrack to Burlesque. But it is incredible how comfortable Nelly is rapping over a twangy beat.

At this point, you pause the stream and think about what has just happened. You acknowledge that the album is hit and miss, but steadily going downhill. And then you’re presented with the fifth song.

Miley, Future, Mike WiLL Made It, and writing credits from Ben E. King. How could this go wrong?

Well, the answer is “very easily,” but somehow this turns out to be great. The idea of Miley and Future doing a duet of “Stand by Me” lyrics feels blasphemous, but again, somehow it’s great. And the fact that a song contains the lyrics “we gon’ make a movie, movie / it’s gon’ be in 3-D, 3-D” and I’m not throwing my laptop out of the window in protest is a testament to something.

This is the first song that you rewind. You rewind it six times. And then you take your headphones off and take a moment to think about how supremely weird this album is. But it works. This wasn’t supposed to happen, because all the Miley hysteria was supposed to end in a dud. But you’re almost 20 minutes in and there’s more to applaud than to cringe over.

And the next song is “Wrecking Ball.” And you’re aware this is a very popular song, even though it’s just all right.

After this banger, another song with another rapper. This time, Big Sean. On paper, this should be the sign that the honeymoon is over. And then you see the title, “Love Money Party,” and you’re even more certain this is where it all goes downhill.

This is not a good song, but it is very addictive. Miley rapping is like Bieber rapping, which is to say they both can string words together, but it is not a fun experience to listen to them partake in the craft.

So why is the song addictive? Again, Mike WiLL Made It. The man might be a genius. And, much like with the Neptunes and Justin Timberlake’s first album, the production is making the newly crossed-over artist come off like a veteran.

Leaving “Love Money Party” thinking about old Neptunes songs, you’re now hit with “Get It Right,” one of the four Pharrell Williams–produced tracks on the album. And, unsurprisingly, it is the best song on the album.

This isn’t hard for Pharrell. He probably made this beat by accident 10 years ago, found it in his Temp folder, and gave it to Miley as an early 21st-birthday present. And the primary reason it is a fantastic pop song is that all Miley had to do is not mess up. And she didn’t. The beat and the exterior bells and whistles are 90 percent of this song. Miley simply had to show up, say a few words, and the song would be a hit.

When the next track, “Drive,” starts off, you think you’re listening to an Evanescence song, and as it progresses, it continues to sound like an Evanescence song. But Miley’s no Amy Lee, so it doesn’t work as well. Even with this slip-up, you’re still not mad at this album. Not at all. Also, in nine tracks, there have been about seven genres of music employed. Or, more accurately, attempted.

And then she comes with Track 10, “FU,” another Burlesque deep cut, but somehow featuring French Montana. No hyperbole, this is one of the strangest songs of 2013. It’s trying to channel Gaga, but ends up sounding like an 11-year-old with a YouTube channel who wants to sound just like Lady Gaga. It’s hilariously bad. All parties involved should be embarrassed.

The final three tracks are very average, in the sense that they aren’t bad, but I have no interest in listening to them ever again. There’s “Do My Thang,” which relies on a dubstep-like drop to stay interesting; “Maybe You’re Right,” which should have been another no. 1 single for Imagine Dragons; and “Someone Else,” which is simply her EDM track.

And then, just like that, Bangerz is over. And you take off your headphones. And it’s a few hours closer to 2014, the government is still shut down, and you’re a grown man trying to wrap your head around the new Miley Cyrus album.

So you think about everything that’s been said about her all year, especially about this notion of cultural appropriation. After listening to this album, your main takeaway is that she can’t decide which culture she wants to hold on to, but that she’s certainly not satisfied with just her own. And since she’s a bit confused, her solution has been to try a little bit of them all. It feels formulaic even for pop music, and you want to be mad at her for that, but you’re not.

You’re not sure what the next step is, but you put your headphones back on, because there are four songs that you genuinely want to keep listening to. And you do that discreetly for the rest of the day.