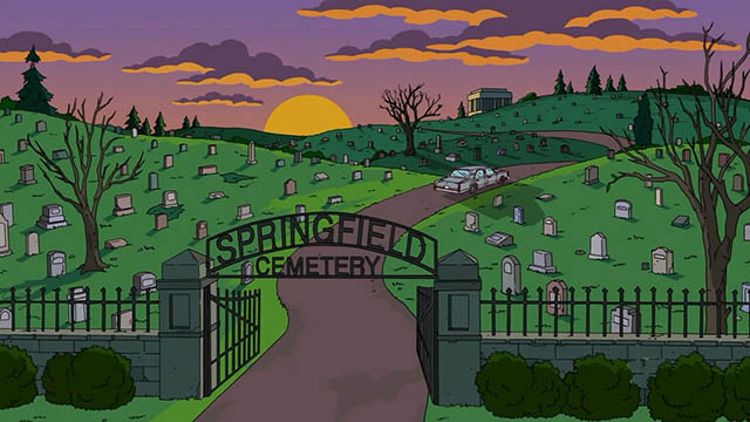 Over the weekend, Simpsons executive producer Al Jean told The Hollywood Reporter that a recurring character would be killed off during the show’s upcoming 25th or 26th seasons, adding that he was aiming for “Breaking Bad–type numbers” for murdering one of his creations. The only detail he offered was that the doomed cartoon’s voice actor had won an Emmy for his or her performance, a clue worth very little when you consider that the show has netted 25 voice-over Emmy wins during its lifetime. Hank Azaria and Dan Castellaneta have each won Emmys for “various characters,” which just makes things more difficult. This is not the first time one of the show’s major character will take a taxi to heaven: Maude Flanders was accidentally killed in a rain of balled-up T-shirts fired out of cannons 14 years ago (posthumously, she reported that the afterlife was “an empty meaningless void”). Comparatively minor characters who have passed on include Dr. Nick, who also ghosted on Springfield after becoming a Trappuccino fatality, Bleeding Gums Murphy (Lisa’s jazz mentor), Homer’s mother Mona (voiced by Glenn Close), and Homer’s coworker and nemesis Frank “Grimey” Grimes.

If the hit list only includes regular characters who have won Emmys, that eliminates Anne Hathaway’s Princess Penelope from the running, despite her trophy (she starred in only one episode, though she was mentioned in two more). It’s also unlikely that a member of the immediate Simpsons family will succumb, because that’s just too depressing. So who does that leave, then? Let’s get to work, Nancy Drew.

Marge’s mother, Jacqueline Bouvier (Julie Kavner), is permanently stuck at 80, and she must be tired. She also smoked for years before quitting and has failed to find romance despite attempts to connect with Mr. Burns and Homer’s dad. Speaking of Homer’s dad, Abraham “Grampa” Simpson (Castellaneta): He’s been senile and reluctantly alive for his entire existence (“Ah, deaaaaath!”), so maybe that makes him too obvious a choice. Krusty’s dad, Rabbi Hyman Krustofski (alternately Castellaneta and Jackie Mason), isn’t too much of a central figure, but I’d be down to sit shivah for him.

Apu Nahasapeemapetilon (Hank Azaria) seems to be a front-runner among online death sleuthers: His character embodies offensive stereotypes against South Asians, plus he gets shot plenty while manning the Kwik-E-Mart (“Ah, the searing kiss of hot lead!”). There’s a slight continuity problem to be dealt with — Apu appears in the future, working alongside his octuplets, in the episode “Holidays of Future Passed” — but that episode is considered noncanonical by Simpsons fans, so the events that occurred don’t necessarily fit into the larger plot as a canonical episode’s would.

Kelsey Grammer’s Sideshow Bob is another popular choice. As Bart’s enemy and the best-coiffed villain in cartoon-dom, his demise would be a plum opportunity for another rake’s revenge, or for a fatal showdown against Bart. Jeff Albertson a.k.a. Comic Book Guy (Azaria) might just die of negativity — I’m sure he’s thrilled to death about the Family Guy/Simpsons crossover episode, snob that he is. Either of the gravelly Bouvier sisters Patty or Selma (both Kavner) could return to the ashes that lend their hair that gorgeous Marlboro tint, giving the remaining sibling a chance to reinvent herself as a quinoa-scarfing blissed-out yogi.

Konsider Krusty the Clown. Krusty falls under the various-Castellaneta-character category of Emmy winners, and though he’s not a front-runner in this guessing match, he’s battled addiction (booze, Xanax, Pepto-Bismol), committed tax evasion, and faked his own death. It seems somehow realistic that the laughs and pancake makeup would have an expiration date. Also, he’s got a faulty ticker.

Oh, Edna Krabappel. The bookies say it might be you, but I don’t want to believe it. Mrs. Krabappel, the only regular character voiced by Marcia Wallace, is multilayered, sad and sweet and bitter and beaten (but not quite broken). She’s currently married to Ned Flanders, so it would be pretty poetic if she met her end and left Ned a two-time widower. Tilda Swinton took her hair inspiration for Burn After Reading from Edna’s gravity-defying do, but Krabappel can also boast the cultural impact of humanizing teachers: Kids like Bart (and educational-system bullshit) transformed her from an optimistic do-gooder into the chain-smoking crabbypants we’ve come to love. When Jean said he wanted the death to be an “emotional through line,” it seemed like a hint that Krabappel might perish.

R.I.P., sweet denizen of Springfield. I will bet on your death as soon as I have decided which of you will croak, but no more than $200,000. To risk more would be disrespectful to your legacy.

Filed Under: The Simpsons