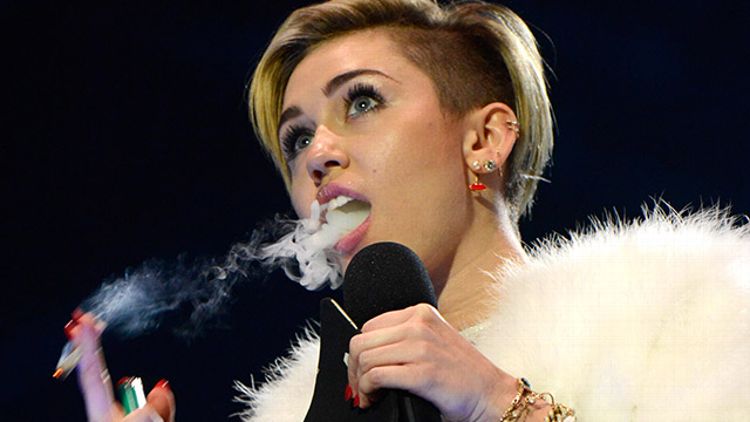 I have a theory that the harder Miley Cyrus is working to create controversy with her performances, the more she’s trying to distract us from digging into her personal life too deeply. Just before announcing her split from fiancé Liam Hemsworth, she created the distraction to end all distractions with her VMAs performance; after four days of nonstop twerk chatter, she took back the mic with an interview for Rolling Stone that involved foot tattoos and skydiving. She’s masterful at exploiting herself. She anticipates a need — not just for showmanship, or for supplying Gaga-esque wardrobe talking points, but for personal, confessional details that don’t fuel gossip, because they are gossip. I think this is why Cyrus sparked a doobie at the MTV EMAs last night in Amsterdam during her acceptance speech, after having earlier emerged from a spaceship.

Let’s back up a second. Last month, Cyrus appeared on The Ellen DeGeneres Show to talk about her breakup. Since then, there has been imaginative speculation as to whether she and Hemsworth are still speaking, which by ordinary tabloid standards would be enough for a front-page blurb, if not a cover on a slow week. That’s not the sort of buzz anybody wants, because it’s the kind that pokes at tender spots that, morally speaking, should be off-limits (but of course aren’t) to the press. The problem is that we require something to replace it, and celebrity can’t subsist on traditional content alone. It needs supplements to thrive, and the most fascinating of that extra content will float to the top of the heap; if you have things you’d prefer to keep private, you could consider burying them. In order to retain momentum, a star has to grant the public access to a frequently refreshed page of revelatory new information, which often comes in the form of the endless parade of minor train wrecks, à la Bad News Bieber or mild-to-moderately annoying marketing pushes, which can damage a brand. You could opt to make your image into a human voodoo doll instead, picking certain areas to stab at to ensure the safety of your core. Hannah Montana is a vestigial appendage, uselessly hanging by a thread. The blood supply was cut off long ago, but you can milk a little more drama out of its severance.

You must begin with a 600-word-worthy dress. One of Cyrus’s EMA outfits was particularly curious: The right side of her body was dedicated to Notorious B.I.G, while, across a laced-up divide, her left was occupied by Tupac. Her crotch said “VIOLENCE” and her behind yelled “PLEASE STOP.” You shouldn’t stop with a dress — the violence, or yourself — and you won’t stop because you can’t stop: You will also need to pack your wardrobe with tight metallic sheaths (no bra) and white leotards with leg holes that long and strive to cozy up to your neck hole. You will need a giant screen to display images of you crying for your intimate and confessional number (“Wrecking Ball”), and you will need to reference your recent past by reprising the twerk, just briefly, and grabbing a little person’s breast. This is the foundation, but now you have to add layers.

You take what you’ve learned in your own recent history— for instance, that grinding on patented objects and relics of childhood will offend the Foam Finger Association and anyone who still uses a binky — and decide to associate with non-proprietary objects instead (like aliens, because, as Cyrus said, “no one owns aliens”; she also gets spacey in Future’s “Real and True,” which drops today) as you perform “We Can’t Stop.” But what if that insurance is not enough to guard you against paparazzi intrusion? What should you do as you accept the award for Best Video, considering you’re in Amsterdam and you’re the kind of person who really enjoys “happy drugs, social drugs”? You thank Terry Richardson (that’s another 600 words). You dig into your Chanel purse, produce a roach (presumably marijuana, because who would smoke half a hand-rolled cigarette procured from a purse? We can just talk as adults here, right?), take a performative drag, profess your love for the crowd, and hand the show back to Redfoo.