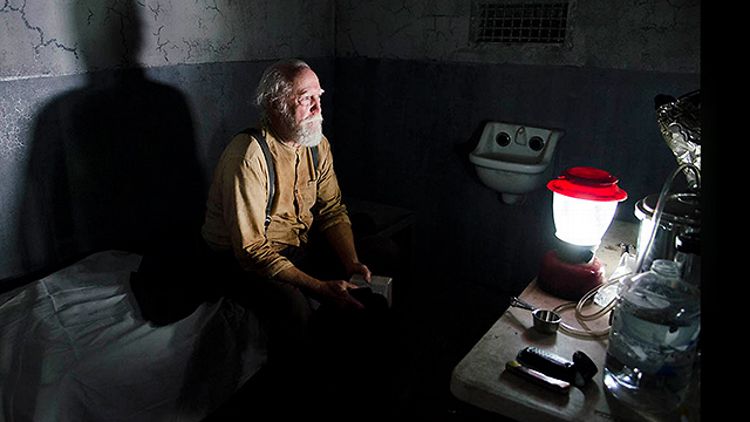 It’s Monday, which means it’s once again time to worship at the Church of the Good Zombie and confront all those bouts of existential nihilism we suppress during the week by YouTubing puppy and baby videos. We can watch dogs licking laughing newborns all we want, but eventually we must face the fact that we’re all merely a lethal lack of horse penicillin away from the Void. So, open your bibles to the Book of Hershel and let us ponder the eternal questions, such as where’s the best place to store assault rifles in case of a zombie fence breach?

Watching The Walking Dead remains an hour for introspection and contradictions. Try as one might to watch with a light zest and armchair blood lust, cable’s highest-rated show sometimes slaps us across the face with a Steinbeck quote burdened by moral pretensions the show simply can’t support. But just as our souls are ready to break under the weight of the heavy-handedness, the show rewards us with the touching sight of a father and son, AR-15’s confidently nestled in the crooks of their arms, mowing down a mass murder of zombies. One minute, we’re rolling our eyes at Hershel’s insistence that all preemptive undead braining be done in private (and just as the freshly turned are ready to give the show’s stars some love bites); the next, we’re praising God that someone had the good sense to keep a shotgun in a hermetically sealed cell block full of patients knocking on undeath’s door.

And oh yeah — the Governor’s back. So, children, let us not ask to understand the mysterious ways of showrunner Scott Gimple as we ponder this week’s Three Questions. Some things are for Gimple, and Gimple alone, to understand.

Aside from opening with a few shots of Rick engaging in his favorite pastime (brooding) and including a quickie Rick-Maggie exchange that set a world speed record for getting over a friend’s summary expulsion, the writing staff pretty much kicked the can on the whole Rick-cutting-Carol-loose thing. Seriously, a guy whose psyche was so recently so fragile — garden therapy notwithstanding — takes the group’s beloved den mother out for a one-way ride into the zombie hinterland and neither Hershel nor Maggie bats an eye? I’ve agonized more over changing dentists. Yes, they had a lot on their minds, like Maggie keeping an increasing tsunami of walkers from tipping the prison’s fence and Hershel serving elderberry tea to the plague-infected at great risk to life and remaining limb, but where’s the love?

Of course, the Carol issue won’t go away, if only because by episode’s end Daryl had returned with Tyreese, Bob, Michonne, and a life-saving bag of antibiotics, and Daryl immediately asked about Carol. Hershel practically scampered away to join Michonne on a zombie-burning hayride as he told Daryl to “talk to Rick.” Not that I blame Hershel. After Bob’s run-in with Daryl over a bottle of tipple last week, I wouldn’t want to be within crossbow range when Rick comes clean to Daryl, either. Throw Hammer-Time Tyreese into the mix and we’ll probably have an HBO pay-per-view special on our hands. But all of that will have to wait, because The Walking Dead had more pressing issues to deal with this week. Namely:

What Exactly Was Shaking Hershel’s Faith?

Hershel’s existential issues occupied the bulk of the episode. While Daryl et al. were out filling prescriptions and Rick was releasing Carol into the wild, Hershel was making like a desperate George Clooney in a very special two-hour ER, trying to keep all the quarantined H1Z1 victims from giving in to despair (and the lethal infection). Hershel seemed to place as much weight on everyone’s spiritual well-being as on their physical well-being, scolding an increasingly feverish Glenn and Sasha for daring to efficiently de-zombify the dear departed in front of the living. Apparently, it’s not the lung-shattering influenza that gets them so much as the dispiriting sight of someone sticking an ice pick into the recently deceased.

Sorry, maybe I’ve been hopelessly desensitized by three consecutive seasons of high-quality zombie splatter, but this character beat reeked worse than Rick’s pigpen. Dressing it up in a Steinbeck quote didn’t create an equivalency between nihilist despair and prudent awareness that the sick people around you are two heartbeats away from snacking on your flesh.

In fact, one could argue that Hershel’s preoccupation with empty gestures actually created the conditions that spawned this episode’s zombie panic: When Sasha (and eventually Glenn) succumbed to fever, Hershel spent so much time ministering and doctoring that he didn’t notice the other sick people in the cell block transforming into walkers. Then, with Sasha and Glenn both incapacitated, Hershel was left to deal with a cell block full of walkers on his own. Fortunately, the disposable Dr. S (a.k.a. Caleb) had judiciously stowed a shotgun in his cell. And it was a good thing, because even though a stray gunshot by one anonymous zombie-bait character — a gunshot that only managed to kill another anonymous zombie-bait character — drew Maggie away from her fence-maintenance detail, she proved close to useless, jamming and breaking her ax on the cell block containment door.

So, it was up to Hershel to take out the freshly zombified Dr. S, grab the shotgun, and save little Lizzie, who lured an intubated zombie away from a hemorrhaging Glenn only to trip precariously at just the right commercial-break moment. Of course, Hershel still took the trouble to draw the zombies into a quiet corner to blow off their heads. Finally, Maggie shot her way into the cell block just in time to save Hershel as he wrestled with the intubated zombie (he needed the pump to save Glenn). Then, over tears and relieved smiles, Hershel cleared an airway to Glenn’s bleeding lungs, keeping Glenn alive until the antibiotics arrived.

Apparently all of the heroism took a toll on Hershel, because he then retreated to the late Dr. S’s cell to caress his bible and stare mournfully at the comrade he had speared through the eyeball mere minutes prior. Kudos to Scott Wilson for selling such an emotionally fishy moment with all his hoary soul; it took every ounce of his gravitas and then some. After Carl and Rick took care of the zombie-flooding problem (more on that later) and Daryl & Friends returned with the life-saving drugs, it seemed the day had finally been saved and the corner turned. That is, until the episode closed on an ominous shot of everyone’s favorite one-eyed Nazi-surplus villain staring at the prison: the Governor.

What Did El Guv Do During His Summer Vacation?

It’s safe to assume he spent it drawing up elaborate, psychopathic plans to inflict sweet vengeance on Ranger Rick & Co. But what are those plans? Do they involve an ACME-brand catapult he’ll use to fling himself into the prison? Do they have anything to do with feeding all those walkers fresh rat sashimi? Or is he simply going to mono-stare Rick to death?

Regardless, there’s only one Governor and way more Rickettes, even after the ravages of zombie plague. Whatever the Governor’s plan is, let’s hope it injects some constructive chaos into Rick’s cozy prison environment. With each passing episode, this season has veered closer and closer to rehashing the doldrums of Season 2’s dreaded farm cycle. One worries that The Walking Dead has painted itself into the same corner Friends did: Much as that show forestalled creative osteoporosis by having its characters sleep with each other in an endless recycling of sexual pairings, The Walking Dead seems to love sending a new character cuckoo for Cocoa Puffs every time the formula of zombie attacks gets stale. But with the sartorially challenged Governor around to suck up all the crazy, maybe something interesting can happen.

After a low kill count last week, the show kicked it up a notch with some choice walkercides on Sunday night. Obviously, Hershel deserves a merit badge for his good old-fashioned pump-action shotgun kills. And Maggie gets runner-up for a classy handgun-to-the-head zombie kill. But there’s no doubt who the hands-down winners are this week and, frankly, for the entire season to date: Machine Gun Carl and his Deadly Daddy.

Once the fence fell and the surging zombies invaded the inner prison yard, Carl and Rick retreated to their conveniently placed stash of assault weapons and let loose like ’80s-era preteens playing Duck Hunt six inches from the TV. Now, you could argue that there’s a level of creative convenience to the well-placed stash of assault weapons and Carl’s miraculous shot-to-kill ratio, to say nothing of why they didn’t simply use those bad boys to thin the zombie herd before the fencing buckled. But then you wouldn’t have beautiful father-son moments like Carl wasting a walker at Rick’s feet while tossing his dad a fresh clip. And Carl just looked so happy, blowing away his adolescent rage issues round after round. You know I have to say it: The family that slays together stays together.

Others might be tempted to crow about predicting Dr. S’s death, but I think we can all agree that was like shooting zombies in a prison yard. I am a little surprised that Sasha made it through the zombie plague. I don’t hear the bell tolling for any series regulars, at least not next week. Who knows what the Governor has in mind, though, and maybe his plans will claim the lives of some of his former serfs. But — for now — I suspect the killing fields will lie fallow.