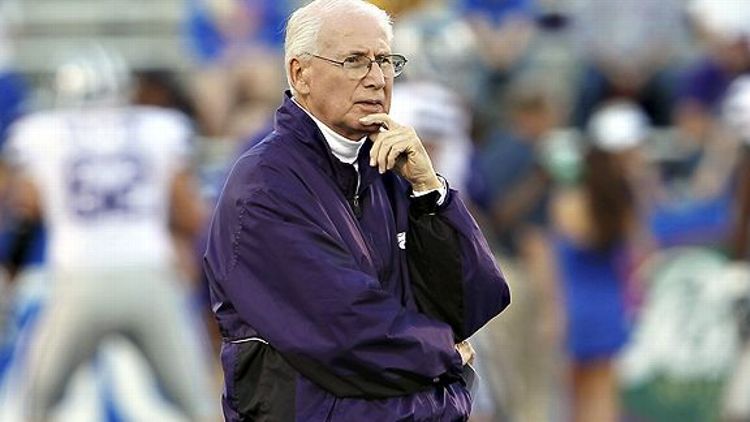 As soon as he hears Bill Snyder’s name, Barry Switzer cuts off the question. He’ll tell you about Bill Snyder. Switzer’s tenure at Oklahoma — a reign that included three national championships and 12 Big 8 titles — ended after the 1988 season, just before Snyder took over at Kansas State. The Wildcats had spent the previous two years punctuating their joke of football haplessness. They went two full campaigns — 27 games, actually — without a win. In a three-game stretch in 1987, K-State lost by a combined 151 points. Over the previous 40 seasons, they were last in the nation in both scoring offense and scoring defense. By almost any objective measure, Kansas State was the worst program in college football history. By his fifth season in charge of the program, Snyder had his team in the Top 25. In his 10th, they were ranked no. 1 and were a play away from the national championship game. It was, without question, the biggest turnaround in the history of college football.

“And he’s doing it again, isn’t he?” Switzer says.

He certainly is, coach.

After Snyder retired in 2005, Kansas State handed the program over to former Virginia offensive coordinator Ron Prince. Three seasons of underachieving mediocrity followed, and in 2009, Snyder returned as head coach … at age 69. Now, K-State is undefeated, back in the Top 15, and one win away from a game against no. 3 Oklahoma that would be one of the biggest in school history.

That it’s all happened in Manhattan might be the most impressive part of all this. Manhattan is a town of around 50,000 in the northeast part of the state, about 10 miles up Route 177 from the interstate. “First impression?” former Kansas State and current Miami Dolphins running back Daniel Thomas says. “My first impression was that there’s nothing there.”

There are the normal draws of a Midwestern college town, notably a stretch of bars called Aggieville, where Kite’s and Rusty’s Last Chance make up the best set of inebriating neighbors in the Big 12. But The Little Apple is really the Pretty Damn Tiny Apple, a place you’re not getting to unless you’re going. “To do what he’s done, and to do it in Manhattan, Kansas, has been pretty marvelous,” Switzer said.

Jordy Nelson was born in Manhattan and grew up about 20 miles away. He grew up wearing purple and spending Saturdays watching K-State football in an era when K-State football was home to players who could be drafted in the second round, but he was always reminded of what it had been.

“My dad tells stories about when you could get into the game on last week’s ticket,” Nelson says. “They didn’t care. If you had a ticket, they let you in. That’s how very few people were at the games. It was the worst program in college football.”

To say there was no football culture in Manhattan when Snyder arrived wouldn’t be fair. The culture was everywhere — and it was completely predicated on an expectation of failure. When he came to town after a stint as the offensive coordinator at Iowa, both Snyder and his returning players admitted that they had lost almost all hope. He was K-State’s fourth coach in the past five years. In the weeks leading up to his first game, Sports Illustrated declared the school, “Futility U.”

Neither Nelson nor Thomas has anything different to say about what it is about Snyder that made this all possible. He’s there when you need him, Thomas says. He demands everything of you, Nelson adds. They describe him the way every football coach hopes to be described — as the loving but demanding father (or in this case, grandfather) who squeezes every bit of potential from a group of kids who want nothing more than his approval.

The difference is that Snyder just might actually be that coach. At no point in his tenure has Snyder ever been the beneficiary of even a top-15 recruiting class. In 2003, a year when Darren Sproles ran all over Oklahoma in the Big 12 Championship game on national TV, K-State still failed to net one of the top 50 recruiting classes in the country. They haven’t had one since Snyder’s return, either. Many of the Wildcats are junior college products and high-profile transfers, a blend of guys who have already been humbled or are already on their second chance.

But what says the most about Snyder’s second act is that it didn’t need to happen. In 1989, he was a 49-year-old first-time head coach at a school where 1-10 was an improvement. Now, K-State plays its home games at Bill Snyder Family Stadium.

Switzer says that coaching in the NFL is about football — coaching in college is about a dozen other things. With teenagers, the job never stops. Never has the gap between Snyder and the players he recruits been larger, and there are instances when Snyder seems every bit his 72 years. He has a 16-pronged set of goals that feels like something from John Wooden. He refers to his players as “youngsters.” He is an unwavering disciplinarian 50 years the senior of 19-year-old kids that increasingly want to do what they want to do. And somehow, he has us paying attention again. A win over punch-less Kansas on Saturday would mean that next weekend, Manhattan would become the center of the college football world — again.

“Doing it again just proves how amazing it was the first time — that it wasn’t a fluke,” Switzer says. “And how old is he? 72? I’m telling you, he’s my hero.”