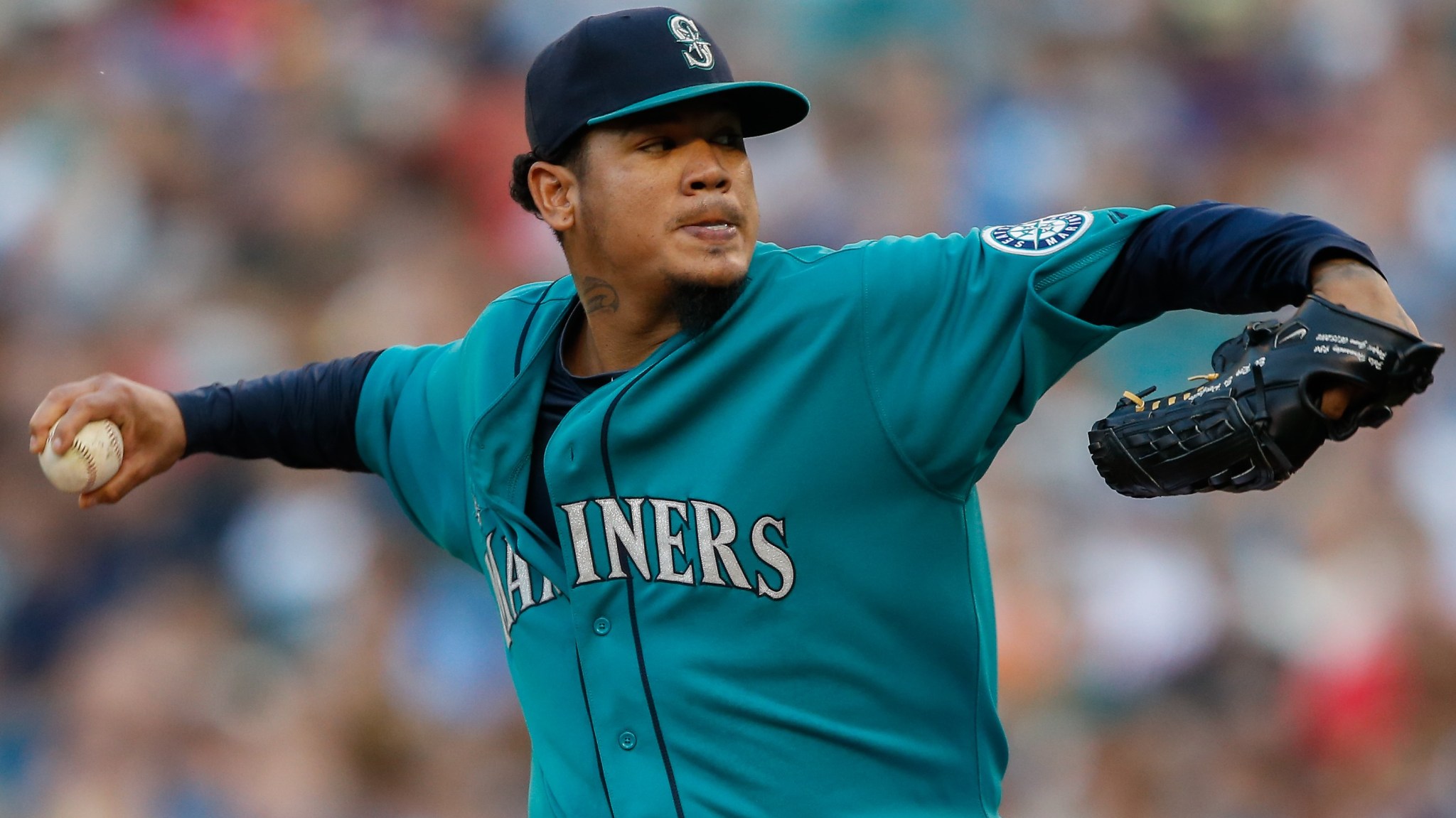 It’s All-Star week, so rather than focus on a single pitcher, it’s time for the first annual PitchCraft Awards. Here we’ll be honoring the good, the bad, and the ugly from baseball’s first half. Starting, because we’re real rascals, with the latter.

(As always, we thank Nick Pollack of Pitcher GIFs, a must-follow for baseball fans.)

Most Hilarious Pitch of the Year

I read the New York Times piece on the “Mystery of the Vanishing Screwball” and thought I’d check up on the following assertion — “It’s safe to say that [Hector] Santiago is the only pitcher who has thrown the screwball in a game this year” — which was backed up by a speculative quote from none other than Tim McCarver. A quick visit to Baseball Prospectus, followed by one Google search for confirmation, shows that the Indians’ Trevor Bauer also throws one, and FanGraphs (which uses MLB’s computerized PITCHf/x) says Alfredo Simon has one, too, though he calls it a “slow splitter.” Aside from those three pitchers, there has been one other screwball — literally just one — in MLB this season. It was thrown July 8 by the Braves’ Julio Teheran to the Mets’ Eric Young Jr., and it’s the only one he’s thrown in his entire career. It was a 64.61 mph effort, and, uh … it didn’t go well.

Thus ended Teheran’s screwball experiment, probably for a lifetime. (Two additional notes: Young Jr. was batting last, despite the Mets having a pitcher in the lineup, making him a likely target for these kinds of shenanigans. Second, here’s the Twitter convo about how this mysterious pitch was classified as a screwball.)

Slowest Pitch of the Year

Congratulations to Marlins fireballer Randy Wolf, who delivered a 55.2 mph stunner (a “slow curve) on July 7, just edging out Henderson Alvarez’s 56.9 mph effort from the day before. I apologize in advance for this GIF:

Fastest Pitch of the Year

No surprises here: Aroldis Chapman, reliever extraordinaire for the Reds, reached 104.17 mph with this 1-2 pitch for a low ball on May 21 against the Nationals:

We lost the Marlins ace to Tommy John surgery until 2015, but none of us will ever forget his insane curveball:

Officially, there are no MLB players who throw a forkball, but two — Boston’s Junichi Tazawa and Baltimore’s Kevin Gausman — throw splitters that have the kind of tumbling, straight-up-and-down action that fools PITCHf/x into thinking they’re forkballs. (Also, the Forkball Preservation Society is led by some very powerful people [cough … Koch Brothers … cough] who exerted their influence on this post.) Regardless, both are incredible pitches. Gausman’s “forkball” produces a .118 batting average against, and Tazawa isn’t far behind at .204. And they look pretty too.

Going back to that “Mystery of the Vanishing Screwball” article, let me solve the “mystery” for you in a sentence: It’s a hugely unreliable, uncontrollable pitch, the effects of which can be duplicated by the far more dependable splitter (or sinking changeup, if you want it to move slowly). Even if we don’t know for sure that it causes injury, the reward is still very minimal. Still, it’s good to have the screwball around, courtesy of Santiago and Trevor Bauer, even if the former can’t throw it for a strike and the latter also can’t throw it for a strike, and neither one gets many whiffs for his effort. But man, it looks cool when it works.

Another no-brainer: Chris Sale. The White Sox southpaw has absolutely insane tailing action on his fastball, sinker, and changeup, leading the majors in horizontal movement in all three pitch categories. In the case of the four-seam, he’s the only starting pitcher to average more than 10 inches of sideways movement. I’m not sure if he has freaky long fingers, or weird arm movement, or what, but nobody has more action on their straight pitches than Sale. It can be tough to see the movement on a GIF, mostly because the camera in Chicago is off-center, but check it out anyway:

Changeup, 12.76 inches of break (watch how Everth Cabrera reaches as the ball leaves the zone):

Four-seam, 11.56 inches of break (this time, watch Carlos Quentin flinch like he’s going to get hit before the ball tails back over the plate):

Sinker, 12.35 inches of break (again, watch Kurt Suzuki’s knees flinch even though the ball ends on the outside of the plate):

In Memoriam: Masahiro Tanaka, Splitter of the Year

The Yankees savior is either out for about six weeks in rehab or out for much longer with Tommy John surgery, but we’ll always have that gorgeous splitter:

Yu Darvish, Mr. Eclectic. May I interest you in an eephus?

Changeup of the Year

On to the big awards! We start with the changeup, and there can be no winner but the man with the best velocity (90.12 mph, which is absurd) and the third-best drop. With opponents hitting .107 and whiffing on 46 percent of their swings, this pitch has produced 81 strikeouts to just 18 hits. Stephen Strasburg is close, and so is Johnny Cueto, but King Felix takes the cake:

Curve of the Year

Keep in mind that the visual component of PitchCraft shares equal standing with the statistical stuff, which is why I initially leaned toward Adam Wainwright. Not only is he holding hitters to .145, but his curve has top-10 vertical and horizontal movement, meaning it makes for an excellent GIF. I quickly checked to see if anyone else met those criteria, assuming the answer was no, and was met with a surprise: Collin McHugh. The Astros righty not only has nasty movement, but also leads MLB in batting average against, holding opponents to an incredible .064 average when he throws the curve (he even throw one “slow curve” that traveled 56.83 mph, less than 2 mph from the Slowest Pitch award!). Add in the fact that he gets the highest whiff/swing percentage among players not named Jose Fernandez, and the incredible upset is complete. McHugh takes it!

Slider of the Year

Cleveland’s Corey Kluber has a slider that not only befuddles batters (MLB-best .075 BAA), but is also a deadly strikeout pitch with 10 inches of horizontal break (also an MLB best) and three inches of drop (fourth). He passes the eye test and the stat test. Watch the beauty in action:

Sinker of the Year

Cueto has held hitters to a .137 average with the sinker. The next best? Dillon Gee at .187, and nobody else is sub-.200. For slugging, Cueto is at .206, and no. 2 is .269. That’s just head and shoulders better than anyone, and while the velocity and movement are largely middle of the pack, he’s so clever with his location and blending that nobody can touch him. Here he is painting the outside corner for a strikeout:

Fastball of the Year

THE GRANDADDY OF THEM ALL.

It’s so tough to award a best fastball, because how do you balance velocity with movement, and both elements with actual results? FanGraphs gives the cumulative award to Jered Weaver, and the per-pitch award to Scott Kazmir, and further research shows that Weaver gets the lowest batting average and third-lowest slugging average in the game. Weirder still, he does it all with an 87.24 mph heater, third-lowest among starters. Then again, King Felix is second in slugging average and eighth in batting average, and he fires it around 94 mph. (FanGraphs somehow has him at 20th in its per-pitch fastball rankings, which, sorry, is stupid). The Seattle ace also has the best put-away percentage, a measure of how often the pitch produces a K in two-strike situations, and an ISO (measuring a hitter’s power by extra base hits) that far surpasses Weaver. No shocker there — in almost 300 pitches, he’s allowed four extra-base hits and zero home runs.

In the end, my decision came down to one stat: batting average on balls in play, a measure of how lucky a pitcher has been. Felix’s BABIP is .319, which means he’s put up terrific numbers despite a bit of bad luck. Weaver, on the other hand, has the second-lowest BABIP at .105. He’s due for a major correction, and I will not sit here LIKE A RUBE and validate his good fortune.

The Cowboys Have Built the League's Best Offensive Line, But at What Cost?