The Cowboys Have Built the League’s Best Offensive Line, But at What Cost? 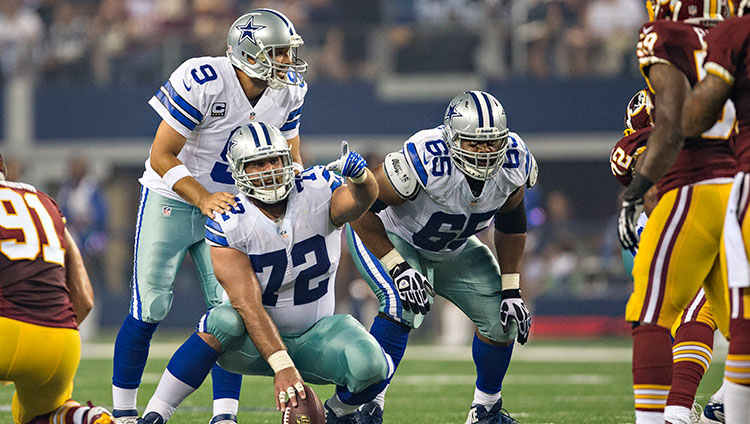 A few weeks after the 2012 season, Jerry Jones said something in his postseason, “state of the Cowboys” press conference that I haven’t forgotten. Dallas had just finished what felt like its 10th consecutive 8-8 season. The blame game roulette was just getting started, and for most people, the ball had already landed on the Cowboys’ offensive line. The 1,265 rushing yards for Dallas’s offense were the worst in franchise history, and the per-play numbers weren’t much better (they finished 24th in rushing DVOA). Still, Jones wasn’t convinced that’s where his team needed the most help.

“If you’re going to have a guy … that can handle a porous offensive line, it’s Tony [Romo],” Jones said. “Tony has some of the best percentages operating behind pressure situation of anyone in the NFL. If there were a place theoretically that you had to have a weakness with Tony Romo at quarterback, that might be a place to have it. You just can’t have it all.”

You can’t have it all. But there’s no rule saying you can’t draft offensive line help. Up to that point during Jones’s time as owner, Dallas had drafted one offensive lineman in the first round: Tyron Smith. And even that took until 2011. All Smith — still just 23 — has done is turn into one of the five best left tackles in the league. Jones may have three Super Bowl rings thanks to one of the best offensive lines ever, but it was never a position on which the Cowboys were willing to spend. Well, some time between that press conference and now, that changed.

Maybe it was the new $100 million deal for Romo, handed out a month after Jones’s comments, or the idea that they could keep oft-injured DeMarco Murray on the field with more help. Whatever it was, after going 30 years without a first-round offensive lineman, Dallas has taken three in the past four drafts.

Last year, it was center Travis Frederick, who went 31st overall and was universally the most panned pick of the entire draft. It was fine that the Cowboys valued Frederick over the incumbent Phil Costa, draftniks said. The problem was that they probably could have gotten him a round later.

Nobody was complaining about what round Frederick was selected in during the early parts of last season. He may have some work to do in pass protection, but after just one year, Frederick may already be the best run-blocking center in the entire league — an ideal pivot point with the quickness and first step to reach defenders a whole gap over and the strength to simply blow others off the ball.

The Cowboys went from 24th in rushing DVOA in 2012 to fifth last season. There was a switch at left guard, where Ronald Leary stepped in for Nate Livings, and Doug Free played much better in his second year back at right tackle (and after taking a significant pay cut). But the biggest change was Frederick, who transformed what that line looked like running the ball.

For the first time in a while, Dallas went into this past draft without the line being a top priority. Where the Cowboys needed help was on defense. When it came time for someone to get the ax for 2012’s mediocre finish, it was defensive coordinator Rob Ryan. As Ryan orchestrated the Saints’ defensive turnaround last year, the Cowboys’ defense turned into one of the league’s three worst. Whether it was a safety, a defensive lineman, anything, new defensive coordinator Rod Marinelli needed some help.

He didn’t get it. At no. 16, the Cowboys took Notre Dame guard/tackle Zack Martin, who figures to start at right guard.

With the drafting of Martin, the outline of a plan is starting to emerge. The question is whether it’s the right plan. There’s a good chance that if the entire line and Murray stay healthy, the Cowboys will be among the two or three best rushing teams in football. “The other thing these guys do, which I think can only help us and certainly is going to be a focus of ours here in the offseason, as well as the season, is it’s obviously going to help our running game,” Cowboys executive vice-president Stephen Jones told 105.3 The Fan in Dallas about his three first-round linemen.

On paper, it’s true. But the problem with the Cowboys last year wasn’t that they had issues running when they wanted to. It’s that they rarely got the chance. 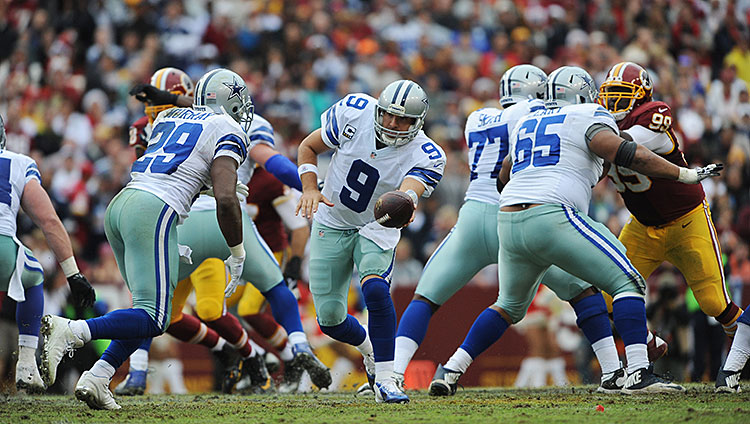 Dallas ranked 31st in rushing attempts a year ago, partly because of Jason Garrett’s infuriating tendency to bail on the running game (see the Bears and Packers games from Weeks 14 and 15), but also because the offense just didn’t have the ball enough. The Cowboys ran fewer plays than any team in football, thanks to a defense that could never get off the field.

There isn’t much reason to think that will drastically change this year. Dallas signed Marinelli favorite Henry Melton in free agency, but its awful cap management prevented the team from doing much else. It also meant that DeMarcus Ware — admittedly coming off a down year — had to be let go. Sean Lee, the Cowboys’ best defensive player and someone fresh off a big contract extension, is already lost for the year. Marinelli is an upgrade over the departed Monte Kiffin, solely because the former has had some NFL success in the past five years, but for the most part, the Cowboys are hoping (read: praying) some of their younger defensive players get better.

The Cowboys have bypassed the chance to find balance across their roster in favor of heavy investment in one area. The offensive line has a chance to be the league’s best. Their sack numbers will never be particularly strong with Romo running around back there, but the pass protection should be good, and the running game should be even better.

The concern, just like it was last year, is whether the other factors will allow them to take advantage of it. For a team crowing about its commitment to the run, Scott Linehan is an interesting choice as the offensive playcaller. In Linehan’s five years in Detroit, the Lions led the league in pass attempts twice (and never finished outside the top six). And if other teams are scoring on every possession, pounding away with Murray probably won’t be an option.

It’s worth remembering that this line-based plan is one that goes far beyond this year. Martin will play guard this season, but Free’s contract is up at season’s end. By next year, Martin will likely be the team’s right tackle. At both bookends and center, the Cowboys will have highly pedigreed first-round picks. Only one team in the league has a similar setup: the San Francisco 49ers, who’ve been held up as the example for years of what investing in the offensive line can do for a franchise.

The difference is that the year San Francisco drafted Joe Staley (who signed a two-year extension yesterday), it also got Patrick Willis. After taking Mike Iupati and Anthony Davis, it found NaVorro Bowman in the third round. Building one of the best offensive lines in football is a start, but on its own, it isn’t enough. That’s a lesson the Cowboys are probably going to learn the hard way.

The future of one of the most talented free agents left on the market remains cloudy, as Eric Bledsoe and the Phoenix Suns remain far apart in contract talks, according to sources close to the situation.