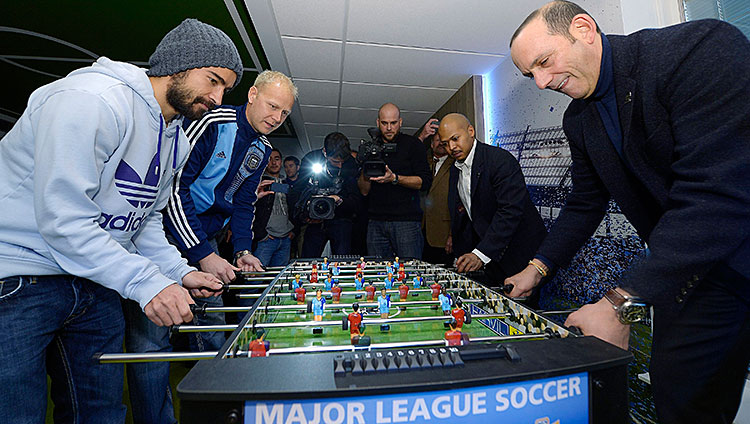 In Part 1 of Graham Parker’s interview with MLS Commissioner Don Garber, Garber discussed the fast-transforming culture of MLS ownership and spoke of the effect of some of the “young guns” who have entered the league in recent years. Before that happened, though, MLS faced a painful contraction and consolidation of many of the remaining teams into the hands of a few charter owners of the league. Garber takes up the story.

The structure and culture of MLS ownership is changing rapidly and robustly, as youthful entrepreneurs buy into a league that has grown out of the same digital era where many of them made their wealth. But it wasn’t too long ago that Commissioner Don Garber had to face the very real possibility that the league could collapse if painful decisions weren’t made.

“We called a meeting in 2002. At that time we had an ownership group for the Metrostars, we had our Miami owner, we had Phil Anschutz, the Krafts, and Lamar Hunt. [MLS President] Mark Abbott and I made a presentation to that ownership group where we laid out a five-year plan which would have required hundreds of millions of dollars of investment,” says Garber. “It painted a bleak picture of what that investment would deliver five years later. And I will say that Mark and I did not recommend that they go ahead with that plan. I could not support this idea that they should continue to invest hundreds of millions of dollars without any indication that it would pay off. We knew we had some real challenges. We still had three league-operated clubs, we were struggling in Miami and Tampa, we had at that time only one soccer stadium.”

Despite the prospective bump in attention in a World Cup year, the MLS executives were convinced that drastic action was needed, as the league tried to navigate the treacherous waters of the post-9/11 economy.

“Plan B was to start a company called Soccer United Marketing and buy the English-language World Cup rights, which we did,” remembers Garber. “Unfortunately, it also meant Phil Anschutz, Lamar Hunt, and his family would have to take over a number of club teams. We had to find a way to triple down and build a number of soccer stadiums. And that’s when Phil decided to build the Home Depot Center.”

The decision also meant the withdrawal of MLS from Florida, with the loss of the Miami Fusion and Tampa Bay Mutiny. At that point, the prospect of Orlando City entering the league in 2015, with David Beckham’s version of a Miami franchise hard on its heels, seemed impossibly remote.

With the league down to 10 teams at that moment, and Anschutz owning more than half of them, ownership decisions were, as one MLS insider put it to me, “a case of ‘What do you think, Phil?’” The contraction was less than ideal. It was a matter of cutting off the arm to save the patient. It would be five years before the patient began to show signs of a return to full, even rude, health. When the revival began, it came from an unexpected source.

“The real turning point was 2007. 2007, we went from 12 teams to 13 teams. Toronto came in,” says Garber. “It was our first addition of a new team with a global sports and entertainment entity that came in and said, ‘Hey, we really believe in MLS and we’re going to put our money behind the idea.’ And when Maple Leaf Sports said, ‘This is something we believe in,’ it sort of surprised the North American sports industry. Stan Kroenke came in and purchased Colorado Rapids, and he had a stadium planned … And it really all came to fruition in ’07. Beckham came on; we sold out Toronto, with 15,000 people on the waiting list; we started evolving the way we were thinking about player development. We started thinking, ‘Maybe we’ve got something here.’”

The two-year period immediately preceding the arrival of the Toronto franchise saw some crucial key moves for the future taking place behind the scenes.

It was a period that saw a young executive at Barcelona named Ferran Soriano make repeated visits to the U.S. (the first was in April 2005), intrigued by the model Chivas Guadalajara were experimenting with in Chivas USA. Despite having “analyzed in detail the possibility of having a team in New York,” as he later wrote, Soriano and Barcelona would commit only to a limited commercial partnership at that stage. When he later joined Manchester City, he would remember these earlier conversations and begin the process that will ultimately, next season, see the arrival of New York City FC.

2005 was also when Adrian Hanauer, then owner of a USL side named the Seattle Sounders, first inquired about purchasing a franchise. Garber would later put Hanauer in touch with Joe Roth, a Hollywood producer who had also showed an interest in acquiring a team, and the wheels were set in motion for one of the most successful franchise launches in recent American sports history. Speaking now about his long-term involvement, Roth notes wryly that, “You make a movie and you know by Friday night if it’s worked. In soccer, you have a little more time to make adjustments and get things right.”

Elsewhere in Cascadia, Merritt Paulson had already begun the work that would eventually lead to the Portland Timbers entering MLS:

“When I first, together with my family, got on board with the idea of professional sports ownership being an option — and this was ’04 and ’05 — the first group we sat down with was MLS,” says Paulson. “I saw the biggest opportunity in soccer, far and away. We talked about San Jose in particular, at that point. And the idea was to buy the team at a number significantly smaller, as you can imagine, than we ended up buying our team for in 2011. But we also would have had to privately finance an entire stadium to keep the team in the Bay Area. That team ended up moving to Houston, of course, but the league was still on our radar screen.”

Cliff Illig, the “young gun with gray hair,” as Garber calls him, was perhaps a little less familiar with soccer’s global reach. Illig had made his fortune in the digital era as one of the founders of Cerner, a company that among other things had digitized medical records. During this same period, he was approached by the Hunt family about taking on the struggling Kansas City Wizards team. Illig was a sports fan who tells me he still gets to “hundreds of games” a year, though he freely admitted to knowing nothing about soccer. But he and his partners were intrigued by the demographic promise of the sport:

“We’re fundamentally analysts. We break things down, we ask questions, and we create scenarios, whether it’s building a stadium or putting the fan experience together or the the technical side.”

Illig and his partners, including the more publicly visible CEO, Robb Heineman, would transform Sporting KC, as their company became known, after agreeing to purchase the franchise from the Hunts in 2006. A state-of-the-art stadium, an Open Cup in 2012, and of course an MLS Cup in 2013 followed. But the hallmark of the Illig ownership group has been the dialogue with its fan base — something that may have seemed anathema to other models of American sports ownership, but which the “analysts” saw as both a necessity and opportunity:

“When you look at interest in soccer, you’re basically looking at that 18-35 demographic, so it’s Millenials. And soccer appeals in such a unique way to that demographic. You look at the average age of a Kansas City Royals fan, or Kansas City Chiefs fan, and they’re quite a bit older. We’re really trading on that Millennial demographic, and it’s in that way that we engage our fans in a much more different way than other sports do.”

Garber is acutely aware of how important this wave of ownership changes really has been to the league. He’s emphatic:

“Some of the biggest, most important developments that have driven the sports industry in the last number of decades have come out of a process when owners have come together and sat around at a board meeting, or at a bar at a big event, and have innovated — and have driven the next generation of developments. That moment has come for Major League Soccer. The changing dynamic around our board table is going to pay off and deliver value for us for years. … This next tranche of time for us, this will be the time when people will look back in years to come and say, ‘This was the era where the league really got competitive on the field.’ We’ve expanded the league, we’ve built stadiums, we’ve expanded our ownership group. Now it’s the time for the game to really be measured against the rest of the world.”

Mike Gillis, who last week said he wasn't sure if he'd be back as Vancouver's GM next season, has been fired.