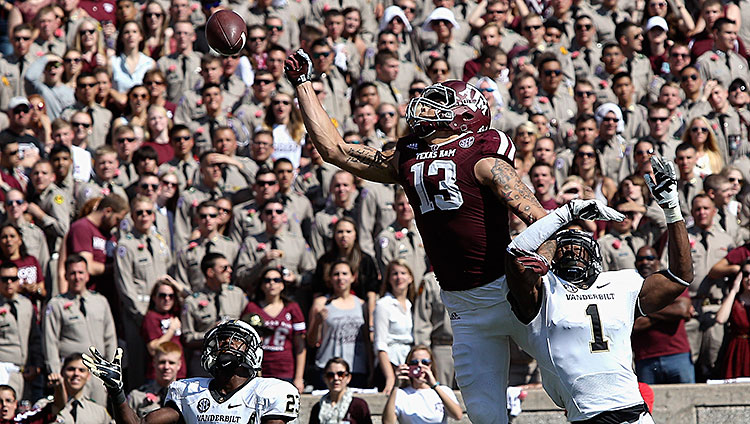 The first time I was blown away by Mike Evans was last September, when Alabama came to Kyle Field. It seemed like there were four or five throws in the first half that Johnny Manziel just threw up for grabs along the sideline, hoping Evans would somehow pluck them from the air. Each time, he did, often with at least one defender hanging on him. I’d never seen a receiver with arms that long. The NFL draft nerd in me filed the game away. But I figured that with that frame, Evans would probably run a less than inspiring 4.65 in the 40 and it would all be sort of moot.

This was the rare player for whom the combine genuinely mattered. If he could run something in the 4.5s, it would be enough to show that he had functional NFL speed to pair with his ridiculous jump-ball skills. When he ran his 4.53 in Indianapolis, he officially became every 5-foot-10 cornerback’s ultimate nightmare.

Evans was recruited barely out of high school. He was a basketball player until his senior year in Galveston, and when he emerged, during Manziel’s Heisman-winning freshman season, it was just his second year of football. Evans is just the latest basketball crossover, and even though he isn’t quite as tall as Jimmy Graham, he might as well be. His 35-and-1/8-inch arms are longer than those belonging to any of the three top tackles in the draft, and his vertical is 37 inches. If the ball is anywhere near him, he’s probably going to get it.

That’s the book on Evans, and I knew most of it even before I started digging a little more. I shouldn’t have been surprised by that combine 40 at all. He isn’t just a tree to stick in the back of the end zone. This guy can move.

The first NFL comparison everyone makes for Evans is Vincent Jackson, which makes sense. Both are rangy, ball-snatching monsters. But when I saw Evans making long strides, tearing up grass on short screens and slants, I instantly thought of how the Bears used Alshon Jeffery last year. Jeffery came into the league with the same knocks. Even if the top-end speed was there, he wasn’t sudden enough to get separation from defenders. What Jeffery showed last season is that he didn’t really need it. Just throw it up. He’ll go get it.

Whether it’s Jeffery or Jackson doesn’t matter. The point is the same: Either can be a quarterback’s best friend. Just ask Josh McCown. The breakout season McCown had at 34 was thanks in large part to Jeffery making plays like this. People are worried that without both Jeffery and Brandon Marshall, McCown’s magic from a year ago will be impossible to replicate. Well, having the next best thing might help. With Mike Williams gone, the Bucs are in desperate need of a second wide receiver, and with the seventh pick, Evans is an option. Vincent Jackson on one side and Mike Evans on the other doesn’t sound too bad to me.