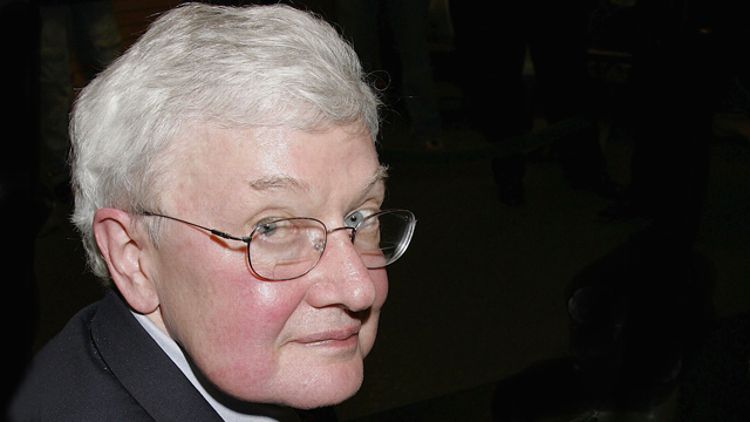 Moviegoing is basically a passive pastime. You buy the ticket, head into the theater, sit, behold, and leave — happy, sad, mad, moved, amped up, let down, confused. The movies happen to you. But Roger Ebert, who died yesterday at 70, happened to the movies and, by extension, he happened to us. For a quarter of a century, he sat across from Gene Siskel and changed the act of moviegoing and popularized the art of movie criticism. He and Siskel started talking on television in 1975, the same year Jaws changed the art of popular moviemaking. How’s that for parallelism? Siskel and Ebert: both the great white shark and the Steven Spielberg of tastemaking.

Yes, once upon a time, people — lots of them — watched as a thin balding man sat across from a smaller, round man and exchanged opinions about the movies. They sat in a Chicago production studio meant to resemble the balcony of a movie theater. They were dressed to look chummy. If you were a child of a certain age or simply a fan of Jim Henson productions, you might find some of the opinions exchanged reminiscent of the grouchy repartee shared between Statler and Waldorf, the lively curmudgeons who resided in the box seats on the The Muppets. What the two Chicago men — critics for rival newspapers — also shared was a belief in the movies’ responsibility to be good, in any and every permutation that something could achieve goodness.

They were not the first to hold movies to some broad, high standard — but they were the first to do so in our living rooms. The show became famous for evaluating films in the same way the Romans passed judgment on defeated gladiators: with their thumbs. But, really, what Siskel and Ebert instilled in the civilian filmgoer was perception. Movies had a surface that could be penetrated and explored. They taught us how else to watch. If you were disinclined or unable to go to a theater, their reviews were supplements. I was a poor kid who wasn’t old enough to see a lot of what they reviewed, so At the Movies was the movies for me.

Their disagreement about Blue Velvet was what did it for me. It was Ebert’s appalled response that changed my understanding of what movies could do in the pursuit of entertainment or money or art. He thought the movie was a tonal mess (was it comedy or horror? Who was it laughing at?), found Lynch to be cruel to actors, especially Isabella Rossellini, who he seemed to think was being exploited. I couldn’t have known at the time (I was 10), but that outrage seems both ironic and acutely poignant since Ebert, proud writer of the cult classic Beyond the Valley of the Dolls, also wrote screenplays for the smutty sexploitation king Russ Meyer. If Lynch was excessively cruel to Rossellini, wouldn’t Ebert know? I don’t think Ebert was right on this. Rossellini was a fearless participant in Lynch’s nightmare, but Ebert’s dismay changed my understanding of how to read a film. For one thing, I didn’t know a film could be read.

Ebert did a lot of reading, particularly on social issues. No major critic did more for black movies than he did. He championed great filmmakers like Spike Lee and Charles Burnett. He lifted up directors like John Singleton and Matty Rich, finding the upside in some of their mediocre filmmaking without ever seeming to damn with faint praise, lower his standards, or lie. Their filmmaking might not have been spectacular, but he deemed it morally necessary. That Ebert married a black attorney named Chaz Hammelsmith in 1992 doesn’t seem relevant to his racial sagacity and yet it does: He could see her radiance. Neither on television nor in print was there any kind of white guilt, just empathy and an uncanny sense of the nuances of racial politics. Talking to Siskel about 1991’s House Party 2, Ebert observed that the dark-skinned kids were portrayed as troubled, bad, or stupid while the light-skinned kids were smart and virtuous, and worried that that dynamic just reinforced all the old intra-racial inferiority complexes. That was the sort of insight television producers were always bringing on Julianne Malveaux to make. To see a white critic express that and do so with that kind of concern only made you feel closer to Ebert. He and Siskel were not unfairly hard on Whoopi Goldberg, Eddie Murphy, or Richard Pryor, making them responsible for their bad choices and not the vagaries of Hollywood racism. There was no lament in the criticism, just disappointment.

Ebert was the more natural star in the relationship. Gene was very smart, but, on the occasions when they disagreed, Roger often seemed to have him on the defensive. Ebert was witty, and, even when they agreed, always had the last word. Discussing what made that Dudley Moore–Kirk Cameron body-swap comedy, Like Father Like Son, one of the worst movies of 1987, they had this exchange:

When Siskel died of a brain tumor in 1999, Ebert soldiered on, trying, more or less, to find a new Gene. It worked so well with Gene because they were evenly matched and so familiar with each other. Also, their opposite body types gave them a classic comedy-duo dynamic that would have been nearly impossible to replicate: He wouldn’t find a better straight man. Some of the replacement hosts were good, but either too deferential or too aggressive or simply wrong for Ebert. (The two times he invited me to do the show with him I was desperate not to appear overmatched.) With Gene gone, Ebert’s iconic status seemed to grow, even as a variety of health problems, which began in 2002, changed his appearance and robbed him of the ability to speak and eat. Illness gave him a will to live.

The arrival of social media, chiefly Twitter, gave him a new voice. His Twitter self was blunt and bullying and occasionally belligerent. It was also prolific and promotional. He pushed food and movies and Amazon. He valuably pushed other critics from all over the world and from all over the map tastewise — Jim Emerson, Kim Morgan, Kim Voynar, Ignatiy Vishnevetsky, Wael Khairy, Omar Moore, Scott Jordan Harris, and many others. If Ebert could no longer use his voice, he’d provide them with a platform, through his blog, to use theirs. He was an invaluable encourager that way, seeking out young talent and promoting it. He had me sit in Gene’s chair when I was barely out of college.

Even with his illness he continued to write. And the writing (and how much of it there is to read!) is what will keep Ebert a titan, alongside Pauline Kael and Andrew Sarris, who died last June. Ebert worked in a separate realm (and city) from Kael’s and Sarris’s rivalries and coteries and seemingly endless word counts. In print, Ebert practiced criticism with vivid clarity. A writer I know once told me he didn’t read Ebert because he get could a plot summary anywhere. It’s true that a typical Ebert review contains mostly plot synopsis, but it’s mostly plot synopsis the way diamonds are mostly coal.

For his review of 2002’s Jackie Chan stink bomb, The Tuxedo, he summons scientists to verify a plot point involving an insect, which was a stroke of genius. You can tell he enjoyed venturing onto that tangent, and that personal pleasure was contagious even when you felt that his criticism couldn’t have been less right. Ebert didn’t just notice clichés (he kept a list) or offer play-by-play — he articulated a sense of reason and logic that made it tough to argue against him emotionally. And if you agreed, the nearly legal case he could make in favor of something could make a less evenhanded critic seem like a zealot. He developed an easy command of his authority. For him, the details about shotmaking and editing and story explicated his enthusiasm and contributed to his air of fairness. It’s true that in the last few years, he read like a man just happy to be going to the movies, giving the mediocre ones the benefit of the doubt. But the case he made for his generosity was persuasive.

He was called the common man’s critic, which is another way of getting at his vast cultural popularity. But he wrote sophisticated criticism, even when he took an unfashionable position (he was, for instance, not a fan of so-called slow-filmmaking). The common-man thing was just status quo for a guy who never forgot he was from Champaign-Urbana. I ran into him once at the Sundance Film Festival. And do you know what he was excited about? His pedometer. He’d been losing weight, and counting his steps became something he enjoyed.

This was after his stroke. He was in the café line where you can buy a bag of Skittles or a $5 slice of pizza that would be inedible under any other circumstances. His diet had changed — fewer fats, fewer carbs, and more exercise. His illness had left him with a speech impediment; his mouth turned down at one of the corners and his words slurred. Unscientifically, he looked to be about half his iconic former size.

He was waiting for a muffin, and while he stood there, a couple of studio executives and local moviegoers joined him in a conversation about what films they’d been liking. They had an easy, animated conversation. Ebert, in the way he liked to do, pointed out the plot flaws of a particular movie. But, also in the way he liked to do, he praised the movie for its heart. He listened to his fellow filmgoers and responded amiably to their thoughts, even the banal ones. If Ebert was bored or preoccupied, it didn’t show. If you didn’t know that he was the most famous film critic in the history of American film criticism, you would have thought him this jolly moviegoer who enjoyed charging the stage at packed screenings, asking questions during the Q&A’s, and taking pictures with his camera.

Here is what happened when Roger Ebert needed a new battery for that camera. He walked from the Chicago studio where he taped his television show over to the Sony store on Michigan Avenue. He made this particular walk in midsummer 1999. It was hot. But the heat didn’t seem to bother him even though he walked in a sport coat. He talked the whole way, mostly about why he hated academic jargon and why he liked his camera. As he made his way along the boulevard, which is famously — or, if you really need to be somewhere, notoriously — clogged with tourists, people tripped over themselves to make sure it was him.

Men, women, children, the young, the old, black people, white people, large Scandinavian-looking people, people who lived in Chicago, people crazy enough to vacation in Chicago at the end of July: They all had a look. A few of them stopped him for a picture, an autograph, or an opportunity to give him their two cents about a movie they’d seen. He obliged. I’ve never walked around downtown Chicago with Oprah Winfrey or Michael Jordan, superstars inextricably synonymous with Chicago, but the response to Ebert seemed vaguely comparable.

When he arrived at the store, he said, matter-of-factly, that he didn’t mind the fans and the photos and the gawking — he said he needed to buy the new battery because he wanted to take pictures of them.

3 Nerdy Jurassic Park Footnotes Before You Head Off to See the T. Rex in 3-D