3 Nerdy Jurassic Park Footnotes Before You Head Off to See the T. Rex in 3-D 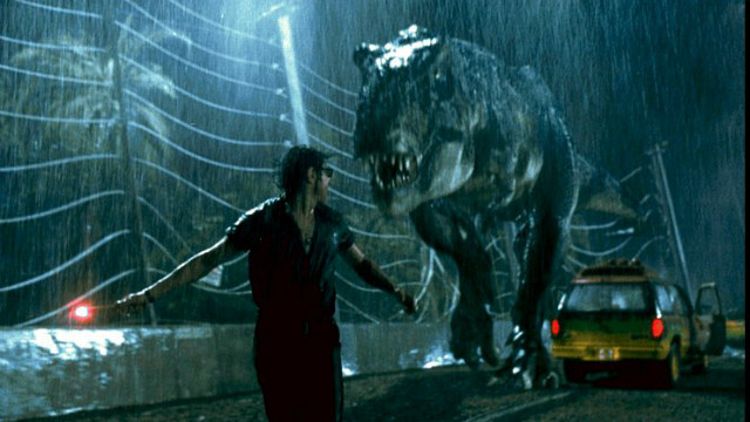 I’m Grantland’s official Jurassic Park historian, and I take that job pretty seriously. A couple of years ago, the editors here granted me several thousand words to write about scene-by-scene breakdowns of JP (the same kind being performed on The Shining), the film’s sexual politics, and Michael Crichton’s literary process.

Frankly, those were all the words Grantland required about a 20-year-old dinosaur movie. But on April 5, Jurassic Park is returning to theaters in 3-D. And that, Dr. Grant, is what we call a “peg.” So here are three more nerdy footnotes that I’ve run across.

Hold onto your … well, you know:

Where’d Michael Crichton get the idea to write Jurassic Park? The first place to look is Arthur Conan Doyle’s novel The Lost World (1912), which is about scientists searching for dinosaurs in Latin America. Conan Doyle — who, like Crichton, had a background in medicine — was the author’s hero. Crichton once said, “Sometimes I think I’ve devoted my life to rewriting Conan Doyle in different ways.”

But Conan Doyle published an interesting passage before The Lost World that might have caught Crichton’s eye. Listen to Sherlock Holmes in the “The Adventure of the Yellow Face” (1893):

Halloa! that’s not your pipe on the table! He must have left his behind him. A nice old briar, with a good long stem of what the tobacconists call amber. I wonder how many real amber mouthpieces there are in London. Some people think a fly in it is a sign.

For a novelist who was devoted to rewriting Conan Doyle, that fly-in-amber counts at least as an amazing coincidence.

2. The Entomologist and the Fax

So Crichton wanted to write a book about dinosaurs. But how? Well, in the early 1980s, Crichton read about the research of an entomologist named George Poinar, who was trying to extract insect DNA from amber. Poinar was pretty famous in the scientific world, and he thought nothing of it when a tall man named “Dr. Crichton” stopped by his office to ask him some questions. Crichton took notes while Poinar talked. He never mentioned a novel. (In fact, at that point, he was dreaming up a screenplay about cloning a pterodactyl.)

Poinar gave me a fax that Crichton sent him in 1993, after the movie had conquered the world. Crichton never says, “I owe you big!” But he did, at least in the spiritual sense. Poinar’s work solidified a story that Crichton says “strains my own credence.” It made Jurassic Park seem real. 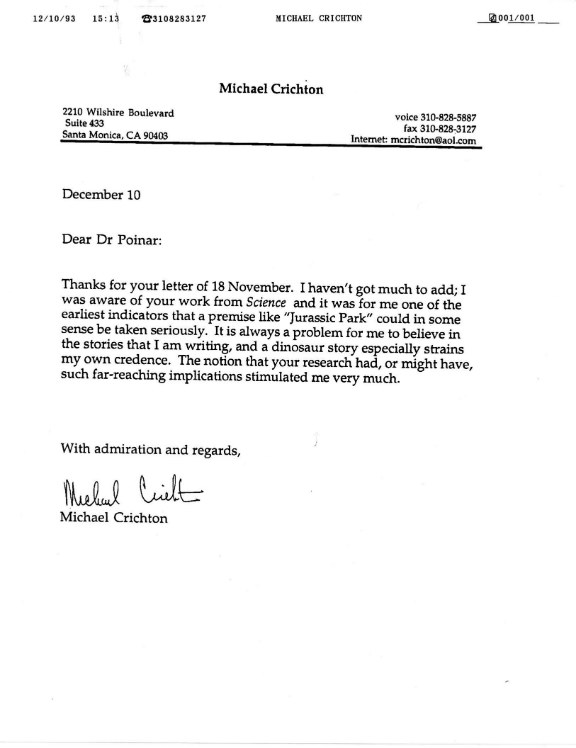 Finally, there’s one scene that never made it into Steven Spielberg’s movie. Early in the film, Lex, the young girl, was supposed to ride on the back of a baby triceratops. The scene was storyboarded, and effects man Stan Winston worked on a model. As David Koepp, the screenwriter, explains in an e-mail:

That scene was story boarded but never actually found its way into the script. We couldn’t quite figure out a way to get a little girl on the back of a wild prehistoric animal without disrupting the careful sense of reality that we were trying to create in the rest of the film. The horror of the second half would only work with some scrupulous work at believability in the first half. Dino rides didn’t fit in with that.

The scene survives in David J. Negrón’s concept art — which shows exactly the problem Koepp is talking about. It’s very Land of the Lost. Negrón’s nightmare T. rex, on the other hand …

… And that sound you hear is the editors yanking me offstage. Enjoy Jurassic 3D. We’ll call another nerd meeting for the opening of Jurassic Park 4. You bring the lysine; I’ll bring the footnotes.

VOD Report: Classic Dumb Comedies Are the Only Foolproof Choice on VOD This Week