Nicki Minaj Reclaims the Twerk in the ‘Anaconda’ Music Video 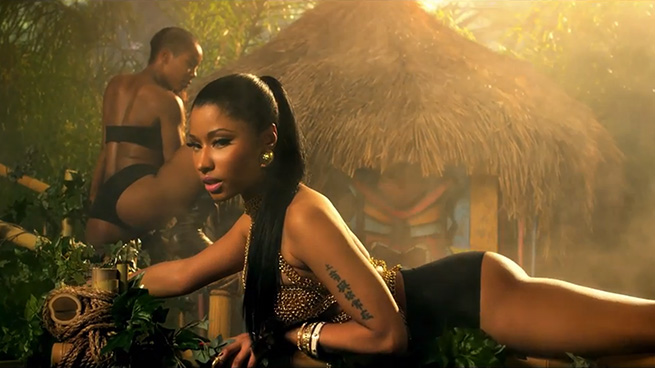 It was only a year ago that Miley Cyrus twerked on Robin Thicke at the 2013 VMAs and kicked off a long public conversation about the appropriation of black musical culture by white pop artists. The history of white artists adopting a black sound and gaining mainstream popularity with it is much older than Elvis or Benny Goodman. It is the dominant narrative in American music from its inception, and any fantasies that America is a “post-racial” country were dashed against the rocks of realityagain this week anytime you turned on the news. You can’t talk about music in America without talking about race, implicitly or explicitly.

Earlier this summer, repeat offender Katy Perry came under fire for a tour performance of “Dark Horse” that involved mummies who looked uncomfortably like Sarah Baartman, the “Hottentot Venus.” Baartman was a South African woman who was sold and toured through Europe as a freak-show attraction, where white Europeans came to stare at her body. Baartman’s large buttocks and long labia, normal for members of her tribe, the Khoikhoi, were considered exotic. The white fascination with Baartman’s black female body was clinical and dehumanizing; she was described as “savage,” likened to an animal, and studied by doctors. She was treated as a literal object, meant to sit on display like the Willendorf Venus so that white people could pay money to gaze at her, money Baartman would never see. As she has with all criticism in this vein, Perry once again denied any culpability by claiming ignorance.

Pop stars traffic in symbology, so when white girls like Miley, Katy, and Lily Allen hide behind the claim that they just didn’t know any better, it seems insufficient. Maybe they didn’t, but somebody around them at some point should have. Which is why it felt tone-deaf when Taylor Swift put out a music video for her new single that featured a couple of scenes in which she used black dancers as props to offset her own clueless whiteness. Taylor has riffed self-deprecatingly on her whiteness before in a video with T-Pain, in which she rapped and flashed a grill. Taylor’s “what?” faces as she fails at each dance setup in the “Shake It Off” video aren’t overtly mocking to the dancers; if anything, the video more directly mocks interpretative dancers than twerk teams. But the twerking setup is also the video still on YouTube, so when you search for it, you see Taylor crawling through a tunnel of legs, with a muscular black woman’s thighs and kneecaps in the foreground. Meanwhile, all the ballerinas are white. Maybe it’s a coincidence that we don’t see the faces of the black female dancers, that they are reduced to just a vibrating ass. Or maybe nothing’s a coincidence, and everything is culturally conditioned.

Swift didn’t invent the rap video tropes that she’s riffing on; the focus on women’s bodies as a series of sexualized parts came of age in ’80s rap and metal videos. 2 Live Crew pushed the envelope to its limit with the “Me So Horny” video, which featured dancers in g-strings. The trope became self-parodic, but it was still de rigueur. Seattle rapper Sir Mix-A-Lot’s video for his 1992 hit “Baby Got Back” took female objectification to its absurdist logical conclusion, with dancers standing on a giant statue of a butt. It was banned from MTV for a brief period for its overt sexuality, but it was quickly reinstated because people fucking loved it. The song is a tribute to women with large asses, but it’s also implicitly a song about shifting racial standards of beauty. The thesis of “Baby Got Back” — that some men might not appreciate a large ass, but Sir Mix-A-Lot certainly would (“pull up quick to retrieve it,” even) — feels charmingly old-fashioned in a post–Jennifer Lopez world. We live in a world where the appeal of a large, plush booty has long since been mainstreamed, and where Kim Kardashian’s ass is more recognizable than her face. It’s hard to imagine that an exercise video called Buns of Steel was once popular. Now, when white pop stars with flat butts jokingly position themselves next to twerking black dancers for comparison, it’s presumably at their own expense, drawing attention to their own lack of ass. But it’s a loaded image, and the fact that the white pop stars so constantly use black women’s bodies to make that joke is an issue.

Into this humid cultural climate strolls Nicki Minaj, whose new video for “Anaconda” isn’t technically a response video to “Shake It Off,” but might as well be. The “Anaconda” video is an extremely self-aware deconstruction of twerking as a trend. Nicki inverts the Miley paradigm, putting her own body front-and-center and surrounding herself with dancers of all races. “Anaconda” turns Nicki’s butt into a literal force of nature, causing earthquakes in a jungle setting. After parodying the idea of exoticism by opening on a jungle scene, she shifts into a workout setup with comically small weights. All of these setups make the same point: Nicki’s body is the modern ideal. And because Nicki is spitting rapid-fire jokes the whole time she is onscreen, it’s impossible to feel like she’s been reduced to a mere body.

This is confirmed by what comes next: Nicki squirting whipped cream on her tits, fondling a banana, and then slicing the banana with a maniacal laugh. Cutting up a metaphorical dick onscreen makes it even more clear that the “Anaconda” video is about Nicki asserting her power, not as a sexual object but a sexual subject. Both the suggestive choreography and the song’s lyrics, which recount a series of sexual encounters, double down on the fact that Nicki has all the power here, and that she can show as much of her body as she likes and retain all that power. Julianne Escobedo Shepherd commented on the power of Nicki’s ass-baring imagery on the “Anaconda” cover, which went viral before the song even came out: “The visual was, almost immediately, enough to trigger some paternalistic outrage — for how dare a top rapper bare so much of herself in a genre that is so consistently respectful to women?”

Music videos often reduce women to a series of body parts. Nicki shows us her body, but makes damn well sure you’re going to know it’s connected to a face, a heart, and a mind. Her body is not her soul, but the two are indivisible. The last setup involves Nicki giving Drake a lap dance and walking away after presumably giving him a boner, making this Drake’s second most embarrassing public erection after Jimmy’s classroom boner in Degrassi. Drake, of all people — stripper-fetishizing emo prince Drake — is the sexual object in “Anaconda.” And with that final inversion, Nicki more or less flips the whole twerking issue onto its stomach, where it can continue to hump the ground forever.