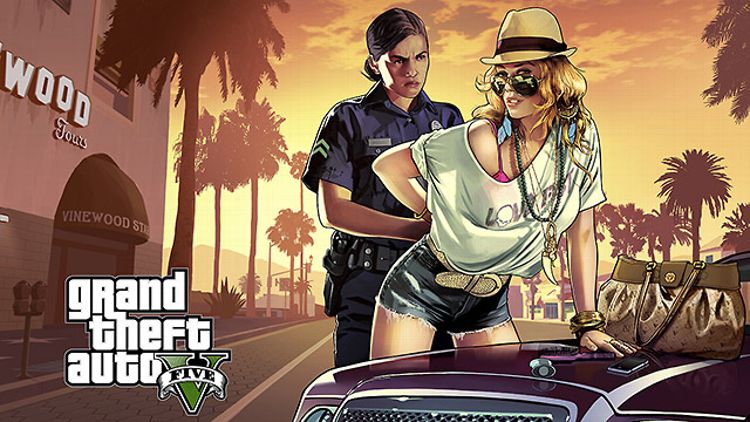 As we gear up for the prestigious media releases of fall, one video game title looms larger than all the others. Literally. An enormous painted mural of Grand Theft Auto V‘s protagonists currently adorns the prominent south side of the Figueroa Hotel in Downtown L.A., with each giant panel portraying one of the three main characters: Michael, Franklin, and Trevor. Set in the fictional pseudo–Southern California region of San Andreas, where 2004’s GTA took place, GTA V promises to be the series’ most extensive installment yet, allowing players to switch between the three leads while exploring the open world map. As in other GTA games, users can follow the intended story line by completing a series of criminal tasks in order to execute six heists, or they can simply dick around in expansive Los Santos and the surrounding countryside, stealing cars, blowing shit up, and driving around aimlessly while tuned in to the awesome radio stations.

One thing users can’t do in GTA V? Play as a female character. The game doesn’t feature any playable women, Rockstar Games co-founder and VP of creativity Dan Houser said, because “the concept of being masculine was so key to this story,” just like it has apparently been key to every previous GTA installment.

It’s frustrating, to say the least, that a vanguard company like Rockstar Games brushes off the idea of allowing for female leads with statements like Houser’s. While it’s not an outright “fuck you” to female gamers, it’s a pretty implicit one. The decision to have three characters allows for what Houser calls “nuanced stories, not a set of archetypes.” But if Rockstar really wants to showcase diverse character types, why is the company so dismissive of having a female GTA lead? Houser’s statement assumes that women aren’t capable of criminality, that violence and mayhem are inherently masculine. But Houser is wrong. And as GTA continues to push the envelope for scope, story, and vision, it’s insulting that women are still excluded.

There is an unspoken assumption that men don’t want to play as female characters, but that women will be fine playing as males and fine accepting that the women of the GTA universe are either eye candy or hookers. In real life, of course, women can be drug dealers, bank robbers, gang leaders, and heartless murderers. Houser’s statement is unnervingly similar to the discussion surrounding female characters on shows like Breaking Bad, which tends to imply that in order to obtain realism, stories can’t depict gender-balanced criminal underworlds. But shows like Orange Is the New Black and Damages demonstrate that a series can feature nuanced, violent female antiheroes and villains, and that people, whoever they are, will go for it if the plot is tight and the backstories are interesting.

I’m tired of hearing this message over and over again, whether it’s stated directly or just suggested: You don’t belong here. Not in tech, not in video games, not in music, not in sports. You are never the main character, you are just in the background or there to support the lead male. And if you don’t like feeling marginalized in a group that makes it clear it doesn’t want you there, you can kick rocks.

Why would any girl want to play GTA V when Houser and Rockstar have made it abundantly clear that they don’t care what women want? Well, because it looks incredibly fun. Let’s face it. Female gamers are still going to play as “retired bank robber” turned reputable citizen Michael, “reckless and psychopathic” druggie Trevor, and Venice Beach repo man Franklin. (Although the developers claim the three leads are more complex than any previous GTA heroes, they sure sound basically the same.) Houser knows that female gamers who want to play GTA V but wish the game featured a playable female character will just suck it up and play anyway, because we want to be a part of what is going to be a huge cultural experience. And because we like driving around fake L.A.

But it’s disappointing that Houser, as the creative director, isn’t interested in being more creative. The possibilities for female GTA leads are endless, and other games about organized crime, like Saints Row, have managed to incorporate playable female characters without losing fans or castrating their male audience. At this point, when the GTA series is on its fifth official installment (not counting handheld spinoffs or expansion packs), Houser’s insistence on excluding women seems defensive and reactionary, bordering on infantile. Why not just say “maybe in the future” instead of shutting down the question with a weak statement about masculinity being a key part of the story? The story also involves BASE jumping off a bridge and slutty yoga classes. It’s a genre-mixing violent action fantasia, so claiming sexism in the name of realism is dumb.

Women have violent nihilist fantasies, too. One GTA V ad (pictured above) even depicts a woman being arrested against a car by a female cop. So it’s not that Rockstar can’t conceptualize female characters; it’s that the company simply doesn’t want to give us the option of playing as them. Creating a playable female character won’t force male gamers to use that character, but it would give the entire user base a choice, and male gamers might actually enjoy playing as a female protagonist.

Female gamers are so desperate for a playable GTA woman that we don’t even really care whether she’s written as a bikini-wearing sexual fantasy, like the one on the current GTA posters, or as a less-scantily-clad career criminal like Snoop from The Wire. We just want more choices, and for influential people like Houser to stop being so condescending about the question even being asked.

Luckily, no one can stop us from playing GTA V as female avatars in the online version. So watch out, citizens of Los Santos. We’re shooting to kill.