What If ‘Serial’ Were a Video Game: The Addictive, Retro Mystery ‘Her Story’ 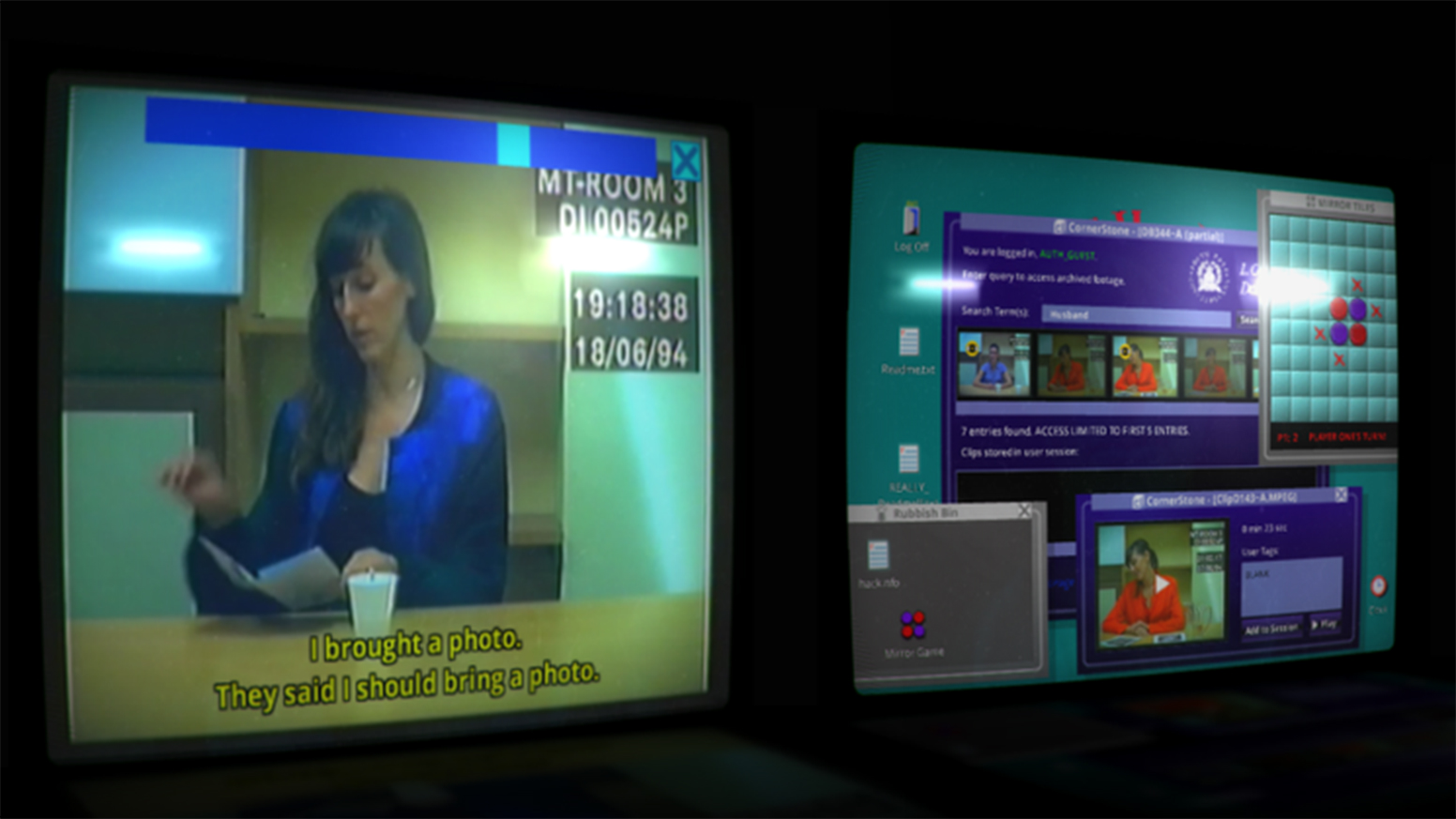 My Grand Theft Auto V character has a smartphone. He is/I am constantly receiving texts with invitations to criminal escapades, great and small. Those invitations could be from actual flesh-and-blood human beings or fully virtual, in-game characters. All of it exists in an immense simulated world filled with digital people and wildlife, missions, side missions, side side missions, and Easter eggs, encompassing 49 square miles of urban cityscape, sylvan woodland, river delta, mountains, deserts, and beaches.

Never in human history has it been so easy to be distracted. It gets so I can’t enjoy the thing I’m reading or watching or listening to, so haunted am I by the seemingly infinite amount of other things I could potentially be reading, watching, or listening to. The Internet has given rise to a vast and growing shared culture that is simultaneously wearying to follow and painful to detach from. And increasingly, the battle for the individual’s attention span penetrates into spaces that were once ostensibly escapes.

The steady advance of technology allows games to be more. More graphically and sonically immersive, like Destiny, which has its own self-contained economies and lifeforms and weather patterns. More responsive to your whims, however violent or weird or quotidian. My GTA V character/I can shoot someone or go golfing or ride a bike or purchase a shirt or have sex. Yet, as games become more real, and the attention-span-choking clutter of the real world is mirrored in the virtual world, playing them is feeling progressively like work. One of the most common complaints about Destiny over the first year since its release has been that players don’t have enough virtual locker space in which to store their property. And the whole point of GTA V (and many other similarly immense gaming experiences) is to gain access to jobs in order to acquire money in order to inevitably buy goods and real estate.

Which is often very fun. But also existentially exhausting. The rat race contains mazes within mazes.

Her Story — available now on PC, Mac, and mobile devices — is a tiny game in comparison to the cutting-edge titles of the day. I played it on my decrepit iPhone 5. It uses a full-motion video design that consciously resembles various terrible CD-ROM titles from the 1990s heyday of the Dreamcast and PlayStation One. The player interfaces with the game mainly by typing search terms into a database, which, depending on the term, returns short (anywhere from a few seconds to a bit over a minute) video clips that only ever feature one person.

Yet, as spare and small as Her Story is, there’s a magical alchemy that arises from the limitations of the design. It’s a thrilling game, rewarding careful consideration and choice with discoveries. It’s unlike anything I’ve played before.

It’s impossible to talk about the narrative details of the game without spoiling the experience, so I’ll just give you the broad outlines. My elevator pitch for Her Story is that it’s Serial in game form. The player sifts through various video clips by inputting search keywords into the database. Each clip is taken from one of seven police interview sessions with a female suspect (played by Viva Seifert) that took place over two weeks in the summer of 1994. The crime in question is the disappearance of her husband, Simon. And even there, I feel as if I’ve said too much. The experience of playing the game is one of pulling various loose threads, just to see which ones will actually lead somewhere. The goal is to eventually assemble all the video clips. It’s a jigsaw puzzle in which pieces are given out only if specifically asked for.

I began playing by inputting the broadest possible keywords into the system — “Simon,” “victim,” “weapon,” etc., thinking that doing so would be the fastest route toward unlocking all the videos. Indeed, the search for Simon turned up 61 possible entries. But here, writer and director Sam Barlow uses the limitations of the game design to his advantage, making them an integral part of the experience. No matter how many hits the player gets on a particular search, access is always limited to the first five (most relevant?) entries. To progress, the player must refine his or her keywords. This forced me to watch each video carefully to decide which fragment of information I wanted to pursue further. The thrill is in the discovery — of new clues, new videos, new details. Additionally, the keyword search process allows for individualized player experiences; my game might unfold in a completely different way than yours.

Quickly upon beginning Her Story, I realized I needed to take notes. My case notes currently stretch through five pages of a Google doc: about 1,000 words of dialogue, names, places, and story inconsistencies, color coded by interview date. I’ve unlocked all the final interview videos and I’m reasonably sure I know what happened. But, even so, I’m still finding new things that totally change the context of the interviews I’ve already seen. In this way, the game manages to strike the delicate balance between mystery and explanation, allowing for a satisfying narrative closure, peppered with the nagging feeling that there’s just got to be a little more there that I haven’t discovered yet. 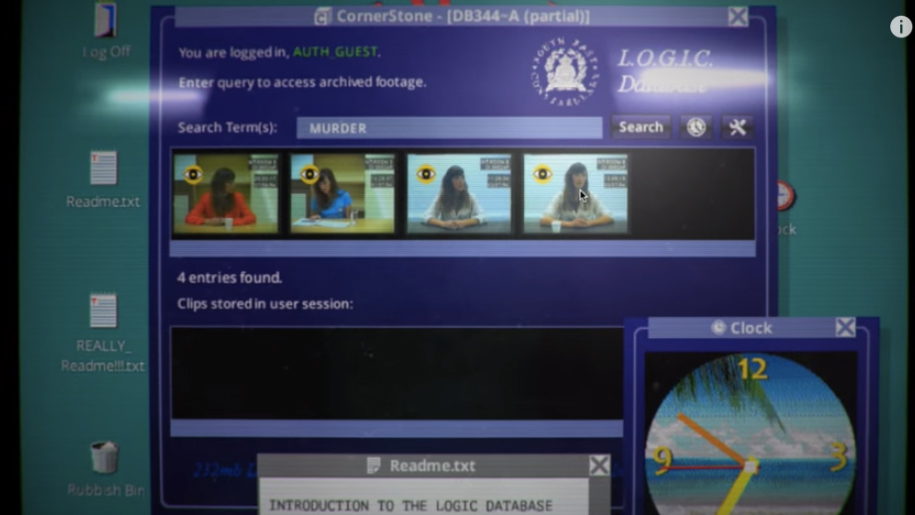 The presentation of Her Story is thematically perfect. The conceit is that you are sitting at a desktop terminal in a municipal police station searching decades-old interview files. Every graphical choice and sound effect seamlessly supports that illusion. The Windows 98–esque desktop icons, the turquoise wallpaper, the cheesy beach-themed clock app, the low-fi, VHS-transfer look of the interview clips. There’s even an effect that suggests fluorescent lighting fixtures reflected on a CRT screen.

The music is unobtrusive. Entering search keywords is accompanied by the click-clack sound of fingers on a keyboard followed by the gentle whir-and-tap of a hard drive cycling. You can hear the computer’s heat fan spinning and the screen humming, and, softly, other people typing in another part of the room.

The strength of video games as an entertainment medium is their interactivity, and the way that interactivity can lead to questions pertaining to identity. Who is taking part in the story that a particular game is presenting? The player or the character? One of my favorite aspects of GTA V is how, when toggling between the playable characters, you find the character you’ve decided to control going about his day somewhere within the game, talking on the phone, driving, whatever. Sometimes, when playing online, if a member of my crew disconnects from the game mid-crime, their now-uncontrolled character suddenly recoils from the destruction and flees, terrified and screaming. Those glimpses of a character’s life outside of a player’s control and beyond the parameters of “The Game” add a weird element of existential mystery.

Identity is central to Her Story. It’s a detective story, after all. But, beyond the obvious question of who committed the crime, and against whom, is a much more interesting question: Who is the player? Who is the person sitting at the computer in the basement of a police station researching a decades-old crime? And why?

Anyway, the less said about the game the better. Just play it.

‘Do You Like Prince Movies?’ Podcast: 'Tangerine' and the Song of the Summer