Cheerfully Alaska-Exiled Pitbull to Internet: ‘Keep Bull——–. Next Thing You Know We’ll Be on the Moon’ 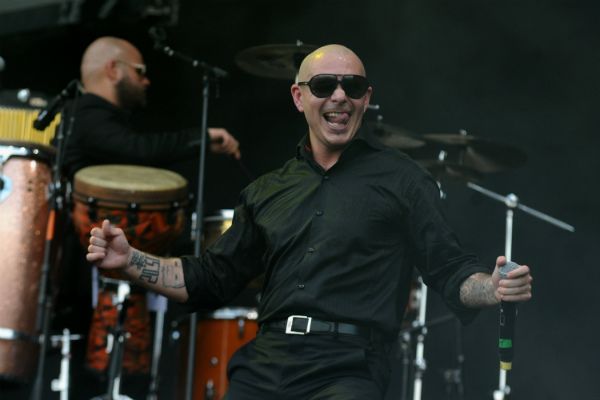 Even today, as we live in a glorious Post-Guilty-Pleasure America, there are some pop stars we’re allowed to hate. Parsing out exactly why is complicated. As far as the process goes, there’s not much difference between what Katy Perry does, what Justin Bieber does, and what Pitbull does. They work within the faceless songwriting/PR machine to craft a sound and a brand; you can either like the sound/brand or not like the sound/brand. But hating it seems to be missing the point. How could you be mad at [Person X] for crafting a mass-appeal sound/brand that happens to not appeal to you? We’re all acknowledging the process here.

The more convoluted answer is that when we hate [Person X], we’re doing it because we think we can tell what [Person X] is like underneath the sound/brand, and so we hate [Person X] either because he or she is trying to propagate a sound/brand so incongruous to their true personality, or because [Person X] is just bad at propagating whatever sound/brand they have chosen. The shorter answer is that pop music wouldn’t be as much fun if we didn’t get to hate anyone. I could defend my appreciation for Katy Perry and Justin Bieber in the face of my distaste for Pitbull. But it just comes down to the fact that his music (yes, much of it produced by the same folks making KP and JB jams) is not pleasing to my ears, and he looks mean and awkwardly puckish to me when he’s onstage. And so I’ve always kind of hated him.

All of which is a roundabout way of bringing us to Monday, when Pitbull touched down in tiny Kodiak, Alaska, because a guy trolled an online contest. When Walmart announced that it would send Pitbull to whatever Walmart location got the most “Likes” on Facebook, Boston Phoenix writer David Thorpe (the same guy behind these horribly funny eighth-grade science fair reviews) began a Twitter mission: Get Kodiak’s Walmart the most “Likes,” get Pitbull to Kodiak. And it actually worked! To his great credit, Pitbull showed up for his exile and apparently had a fantastic time. Says the AP, “Pitbull received a care package … complete with bear repellent spray and bear bells used by hikers to make noise … Pitbull [also received] a key to the city from Kodiak Mayor Pat Branson, who donned shades to mimic the dapper rapper’s look. Pitbull tweeted a picture of him holding a child onstage alongside Alutiiq (UH’-loo-tic) dancers and said, ‘Thank U Kodiak … I am honored, truly.’ The rapper, known as ‘Mr. Worldwide,’ told the audience he would put Kodiak into a future song.” Where it gets really good, though, is that David Thorpe was in Kodiak, too. Because Pitbull flew him out there.

Says Buzzfeed, “Though Walmart and contest co-sponsor Energy Sheets had been in touch with Thorpe over email and invited him to attend Pitbull’s appearance, they didn’t want to shell out to fly him to Kodiak. Instead, Pitbull himself personally paid for Thorpe to come to Alaska … Thorpe told BuzzFeed, ‘Pitbull was very cool and unflappable. I didn’t get to speak to him too much, but his entourage spoke very highly of him.” Thorpe also tweeted out photos alongside him and his target, and relayed this message: “Just met Pitbull. He shook my hand and said ‘Keep bullshitting. Next thing you know we’ll be on the moon.'” At some point, Pitbull tweeted “‘Keep your friends close, and your enemies closer.’ Sun-tzu ;)” along with a photo of him and Thorpe.

So Pitbull has a sense of humor and is a great sport and knows how to mess with people. We’d like to believe that the decision to face down Thorpe was made by Pitbull himself, on a whim, ’cause he’s real relaxed like that. Quite possibly, there was an actual full-fledged marketing-team meeting to discuss the best course of action. Either way, Pitbull has managed to convince me he’s a pretty cool guy. I will now begin to appreciate his sound/brand a little bit more. I realize I am being manipulated. I can’t help it.

After the event wrapped up yesterday, Thorpe tweeted “This whole thing, in the end, was merely a duel of two men and their personal brands.”

The New Skyfall Trailer: A Quantum of Redemption