Songs of the Week: Rich Gang, E-40, the Empty Hearts, and More 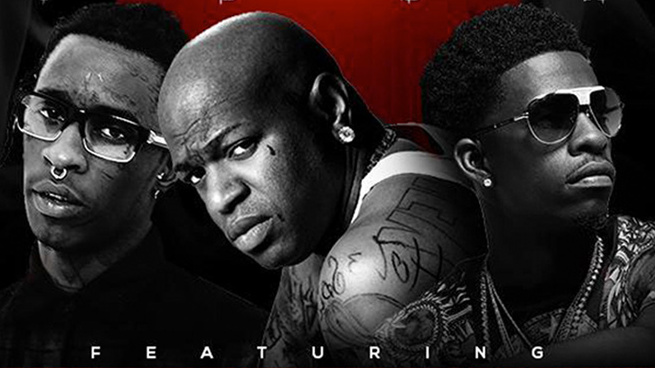 This song features literally a full minute of Birdman talking before anyone starts rapping. That gives you plenty of time to prepare for “Givenchy” to really start, but you’re still not ready for the plush-leather-interior beat and “Versace”-on-quaaludes chorus. What the Rich Gang mixtape has taught me is that I could listen to Birdman talk for hours. Let’s get Birdman doing some books on tape. I want Birdman to read Gone Girl and The Goldfinch to me.

It was really only a matter of time until Mr. Worldwide made a “Mambo No. 5.” For real, though, this is a welcome respite from techno-pop-rap and a promising new direction for Pitbull. The swing-influenced song is not a blatant advertisement for the popular cinnamon liqueur, but who would be surprised if the endorsement-happy star had a deal with Fireball Whisky? The video takes place in a Tex Avery club, where a Jessica Rabbit in a red sequined dress captures the fancy of Mr. 305.

Dev Hynes (Blood Orange) helps Tinashe take it to the velvet rope with this underwater slow jam from the “2 On” singer’s forthcoming debut album, Aquarius, which will appeal to fans of Banks and FKA Twigs, as well as those digging the jazz-fusion feel of Flying Lotus’s new album, You’re Dead!

OG Maco, “Love in the City”

Speaking of jazz fusion, here’s Atlanta rapper OG Maco, whose song “U Guessed It” was a Vine-assisted viral hit. After the post-Yeezus industrial murder-basement minimalism of that track, OG Maco takes a turn with “Love in the City” into lush Pat Metheny synths and progressive jazz chords out of a Weather Report album; the abstract echo-singing in the background sounds like a Pharoah Sanders tune. “Love in the City” is a contemplative dark song that feels like lingering too long in an empty parking lot late at night.

Oh, and speaking of lingering late at night, King Chip (formerly Chip Tha Ripper) is a Cleveland rapper and Kid Cudi associate whose new “Walking Home” perfectly captures the mix of apprehension and excitement that accompanies a solo trek on foot. Chip is talking specifically about the daily terrors of walking home through a “bad” neighborhood — at the end, a title card reads, “ENJOY YOUR SAFE NEIGHBORHOOD, AND THANK GOD IF YOU CANNOT RELATE TO THIS VIDEO.” It’s a crunching, frightening, Halloween movie of a song with an autumnal video directed by Chip himself about the totally non-supernatural terrors he encounters on his stroll back from the bus. The spooky strings and solo piano add to the atmosphere, reminiscent of the Geto Boys’ “Mind Playing Tricks On Me.”

Domino Saints are a Puerto Rican group now based in Miami made up of IRL couple Gigi Ojeda and David Leal, who make bilingual Latin pop influenced by dancehall and salsa. “Tesoro” is their contribution to the burgeoning genre known as “electro-merengue.”

Melancholy synthpop with jangly guitars from Manchester. Y.O.U. stands, N.E.R.D.-like, for “Your Own Universe,” and is the nom de choon of artist Elliott Williams. Perfect for fans of Bleachers and XTC alike.

DJ Mustard is on a tear right now that can be compared perhaps only to the Eagles in the early-to-mid ’70s. He is unstoppable, and why would you want to stop him? He has brought West Coast bass music back. “Ghetto Tales” is heavily indebted to at least a couple West Coast classics — Too Short’s “Freaky Tales” and Eazy-E’s “Boyz-n-the-Hood” — and the guttural “ughh” in the chorus feels very E-40.

SPEAKING OF E-40 … I am always speaking of E-40, because he is criminally underrated and the James Joyce of our time. Luckily, he’s the highlight of this Big Sean song produced by the all-star team of DJ Mustard, Kanye, and DJ Dahi. Big Sean’s profanity-laden kiss good-bye to former girlfriend Naya Rivera is not subtle, but boy, is it effective. If you’re going to say something misogynist, it better be funny as hell, and man, did I laugh the first time I heard E-40 rap, “I’ll make a bitch stand outside forever like the Statue of Liberty.” Plus, the beat is an old-fashioned Bay Area bass stomper, designed to squelch out of a car stereo system.

A garage-rock supergroup made up of new-wave all-stars, the Empty Hearts are Blondie’s Clem Burke, the Cars’ Elliot Easton, the Romantics’ Wally Palmar, and the Chesterfield Kings’ Andy Babiuk, with assistance from Ian McLagan of Small Faces. The Empty Hearts recorded an album in five days at the request of their friend, garage-rock enthusiast Steven Van Zandt. The result is a sweaty power-pop wet dream that actually sounds a lot like the tragically curtailed Portland power-pop garage band the Exploding Hearts.

David Fincher’s Misdirections: The Movies Inside His Movies

The Right Reasons Podcast: 'Survivor,' 'Below Deck,' and a Sprite Taste Test