Songs of the Week: Grimes Goes, La Materialista Vibrates, and Ab-Soul Has Fun 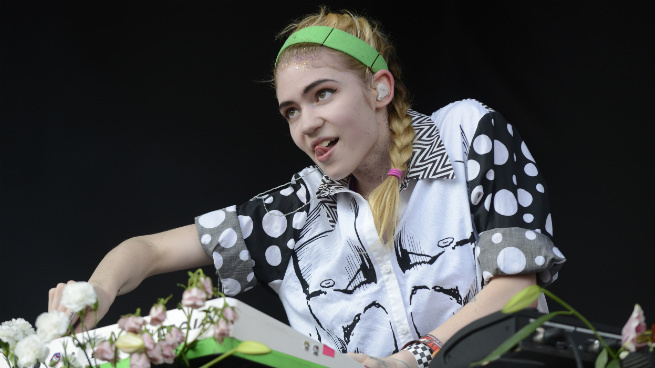 This is the song that Grimes wrote for Rihanna, which was rejected for reasons we will never know or understand, so that we might have the Grimes version instead. And like Sia’s “Chandelier,” just the mere association with almost being a Rihanna hit means this song comes covered in Swarovski crystals. It’s a good reintroduction song for Grimes, too, reminding us that she has always harbored R&B instincts. In going for a kind of Rated R version of her own sound with producer Blood Diamonds, they discovered a new level at the bottom of Lake Hylia.

Cozz, a.k.a. Cody Macc, is a phenomenal 20-year-old South L.A. rapper, and “Dreams” produced by Meez is his calling card, a dark and heavy tour de force with shades of Mobb Deep. He just signed to J. Cole’s Interscope imprint Dreamville, and his EP Cozz & Effect is due out any minute now.

La Materialista is a Dominican rapper, actor, and model whose real name is Yameiry Infante Honoret. My incredibly rough translation of this song’s title is “the big ass that vibrates.” This Dembow video features a lot of twerking and a sample of a mechanical vibrating sound as La Materialista demonstrates why she is the Nicki Minaj of the Dominican bachata rap scene.

4. Dierks Bentley, “Drunk on a Plane”

Gorgon City is the U.K.’s latest garage darling, and this song with Laura Welsh is poised to be the next Sam Smith–and-Disclosure-style British breakout.

Boogie is a rapper from Long Beach, with the associated laid-back style, who you will feel like you’ve been listening to all your life when you hear him for the first time.

Phyno was Azubuike Chibuzo Nelson’s nickname in high school, short for “Phenomenal.” The Nigerian rapper with a signature Mohawk is one of the stars of the Naija rap scene, rapping in Igbo and occasionally English about his “alobam,” which the Internet says is slang for “someone you can go the extra mile with, your ride or die.” Meaning, your alobam will never snitch.

Berner is a Northern California rapper who supposedly turned Wiz Khalifa on to the vaporizers known as Trippy Sticks, which Wiz then made world famous by shouting out in songs. In terms of music drug mythology, this is like Bob Dylan smoking out the Beatles for the first time. Berner is on Wiz’s Taylor Gang Records. He is also a stoner rapper, and he teams up here with Compton’s YG, Atlanta’s Young Thug, and Vallejo rapper Vital.

Ab-Soul interpolates a Drake song in this psychedelic rap song that name-checks “Strawberry Fields Forever” and has a hundred different interesting elements as he raps about DMT, Morpheus, Welch’s Fruit Snacks, shrooms, and Russell Crowe before ending with a skit. Is this prog?

Don Miguelo is a reggaeton star, and this remix of his latest hit with Dr. Worldwide just feels right for kicking off the summer, like a cold popsicle. Just give in to Pitbull’s allure. Dale.

"Actually, Ben McKenzie was kind of mean to me. I hadn't done anything at that point and he was a little bit of an ass. But I love him. I think he's a great actor and I love 'Southland'... Mischa? I didn't really...Was she there? I don't even have memories of her." " -- Cam "Kevin Volchok" Gigandet lays out some long-simmering 'O.C.' beef.