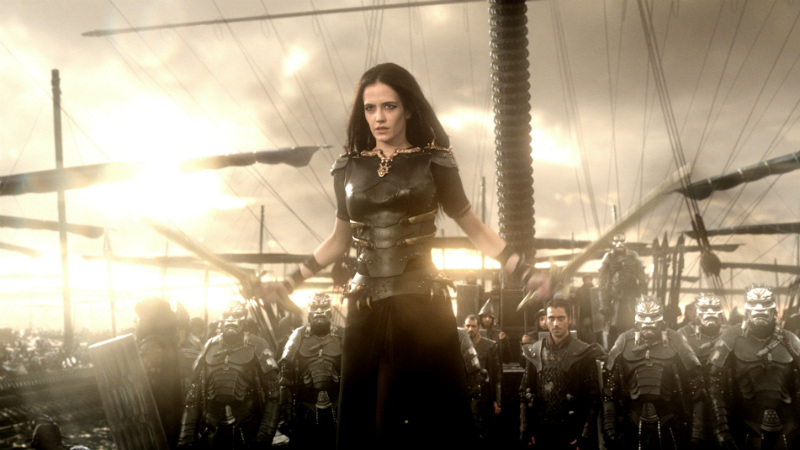 Did any surprise hit ever promise more for everyone involved and then deliver less than 300? We all thought Gerard Butler was going to be a huge movie star: Then he made a string of generic “comedies.” We thought Zack Snyder was a visionary: Then came twin bummers Watchmen and Man of Steel. Lena Headey’s doing OK; everyone else could pretty much be in that bottomless pit for all we know.

Well, anyway, here’s another one. Like 300, it’s based on a graphic novel by Frank Miller, and though Snyder still has a hand in it as co-screenwriter, Noam Murro takes over as director for what is only his second feature (after 2008’s Smart People). Remember how Darius died in the first one? Now his son wants revenge.

Though I barely remembered that this movie had even happened, it managed to gross more than $100 million in North America and another $224 million overseas, so there must be something to it. Even if it can’t recapture that 300 magic exactly — 2007 is gone, and it’s never coming back — at least it could be a decent swords-and-sandals offering to get you through the lean times between the old Hercules movie from January and the new one that won’t be out until next month.

Immigration is one of the most complex issues in politics today, resisting all attempts to regulate it with unpopular legislation that never passes anyway. And though it may seem strange to some that even children who illegally entered the U.S. and therefore didn’t knowingly break any laws could still be prosecuted, have those bleeding hearts ever considered that such children could grow up to be master thieves raised by demons in the guise of gang leaders and end up becoming immortal after encountering their guardian angel that happens to be a horse? Because according to Winter’s Tale that happens all the time.

Seriously: That is what happens in this movie. A baby’s immigrant parents are denied entry because they have tuberculosis; they FLOAT THEIR BABY to shore, where a demon/gang boss named Pearly (Russell Crowe) takes him in; that baby grows up to be Colin Farrell; and then he meets and instantly falls in love with his own beautiful consumptive (Jessica Brown Findlay, Downton Abbey’s Lady Sybil), but things don’t end well for him, and he’s left to wander New York bereft and amnesiac for like a hundred years until a nice newspaper reporter (Jennifer Connelly, who owes first-time director Akiva Goldsman a favor since he did write the role that won her an Oscar) tries to help him figure out what his deal is and how to move on.

Wesley Morris: “Whenever someone asks why something happens to be, the response tends to be something like, ‘Those are the rules.’ They’re just never made clear to us, so it seems as though Goldsman is simply making things up as he goes.”

Thirteen years ago, David Wain and Michael Showalter cowrote a script for a parody of ’80s teen/camp movies (which Wain directed) that became a cult classic for the ages and as soon as I remind you of its title — Wet Hot American Summer — you will want to watch it again. But wait! Watch their new spoof!

Available on demand the same day as its theatrical release, They Came Together features WHAS almuni Amy Poehler and Paul Rudd in a parody of, judging by the trailer, all romantic comedy tropes and clichés. As if letting former Parks and Recreation combatants Rudd and Poehler play a couple for the first time wasn’t enticing enough, they’re also supported by an all-star supporting cast including Ellie Kemper, Jason Mantzoukas, Ed Helms, Melanie Lynskey, Bill Hader, Max Greenfield, Michaela Watkins, Ken Marino, Cobie Smulders, Chris Meloni, and many more. And if you rent it as soon as the weekend starts, you can probably watch it 10 times in a row. You’re welcome.

What in the world could ever tear apart the closest of female friends in their last summer before college? How about setting themselves the challenge of both losing their virginity (not to each other) before they ship out, and then … both crushing on the same dude?

Very Good Girls — on demand in advance of its theatrical release — is the directorial debut of screenwriter Naomi Foner and stars Dakota Fanning and Elizabeth Olsen as the besties in question. Behind the Candelabra bit player Boyd Holbrook is David, their shared love object, and while I hate to tell fictional characters to set their fictional sights higher, any dude who asks you to read Sylvia Plath aloud before getting down is only going to be annoying in the long run anyway.

Last year’s Drinking Buddies put mumblecore writer-director Joe Swanberg on the map thanks to its four indie-darling stars (Jake Johnson, Anna Kendrick, Ron Livingston, and Olivia Wilde). Now that “from the director of Drinking Buddies” actually means something to moviegoers, his new film, Happy Christmas, could be a breakout indie hit.

Available on demand before it hits theaters, Happy Christmas revolves around married parents Kelly (Melanie Lynskey) and Jeff (Swanberg). When Jeff’s feckless sister Jenny (Kendrick again) moves in with them, she and her best friend, Carson (Lena Dunham), start interrogating everything about their seeming domestic bliss.

Wesley Morris: “The actors sit around doing very little acting, and the characters remain slouched in their own ennui. But I liked this movie more than last year’s overpraised Drinking Buddies.”

Songs of the Week: Grimes Goes, La Materialista Vibrates, and Ab-Soul Has Fun