Sundance Diary, Days 5-6: The Happiest Movie You’ll See All Week, and the Most Ridiculous 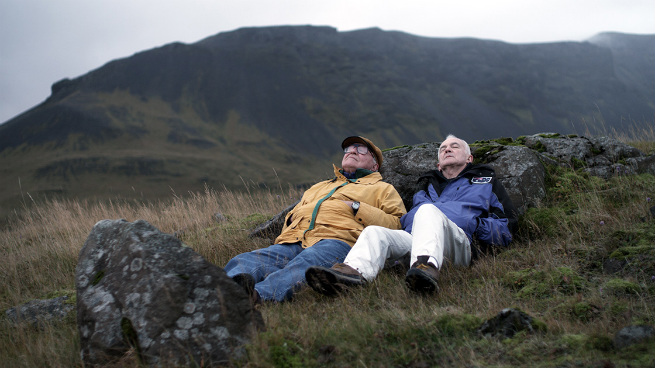 Tuesday afternoon, on my way into a movie, I ran into my pal Thom, who’d said he hadn’t seen anything he was all that thrilled about. I asked him what he’d seen and was relieved to hear that he hadn’t come across Land Ho! Failing to be excited by that would mean he was already dead. I made him a promise: This movie will turn your 10 days around. It actually restores the “sun” and “dance” to this event.

The premise is narratively digestible: Two friends, somewhere in their sixties, take a vacation to Iceland. Mitch (Earl Lynn Nelson) is a voluble Kentuckian, a big rig with thick black glasses and a medical degree. Colin (Paul Eenhoorn) is a dry, pensive Australian. They were married to sisters. Now they’re widowed and divorced, respectively. The trip is Mitch’s treat, and Colin reluctantly takes sidecar duty. What ensues is hilarious perfection. These two radically different flavors of men make their way across the country, by foot and by Hummer. One’s unembarrassability brings out the other’s sense of embarrassment. They drink beer, share pot, discuss movies, look at art, dance on rocks, get lost, and ogle women — well, Mitch does most of that. Mitch does most of everything. His personality isn’t big. It’s titanic.

Nelson only recently came to acting. He’s a plastic surgeon in New Orleans. And his cheerful vulgarity, which includes a kind of non-threatening old-school chauvinism, is part of his charm. This is an authentic version of what Danny McBride’s brand of comedy seems to be going for (Nelson appeared in the water-park episode of Eastbound & Down). But Nelson radiates life and warmth — there’s no bullshit, and in Land Ho! he’s got you from the opening scene. Eenhorn is more seasoned — last year his casual stoicism in This Is Martin Bonner made him a film-festival item. He shrewdly goes the opposite direction from his costar.

But the directors, Aaron Katz and Martha Stephens, aren’t content to give their movie over to Nelson. They make excellent use of both original synth-pop music and Big Country’s “In a Big Country.” It’s a song you’ve heard a thousand times but that here seems newly profound: “Pull up your head off the floor / Come up screaming / Cry out for everything you ever might have wanted.” The camera never fails to consider the scenery, so that even Mitch’s bigness is unceasingly dwarfed by landscape. The camaraderie has a sense of cosmically topographical wonder. Lava fields, hot springs, mountains: They’ll be there long after these two are gone. That, of course, is Mitch’s point: Live now. And, mercifully, he makes it without anyone having to announce that they’re dying.

This, to me, is quintessential Sundance: a tiny movie that comes from nowhere and makes your day, your week, and possibly your year. (Just this morning, Sony Pictures Classics announced a distribution deal; bless them.) I suppose it’s possible to dislike Land Ho! It’s silly. But so many movies here are silly, and none of them transmit this kind of joy. The silliness is undeniable, but it’s also undeniably triumphant. 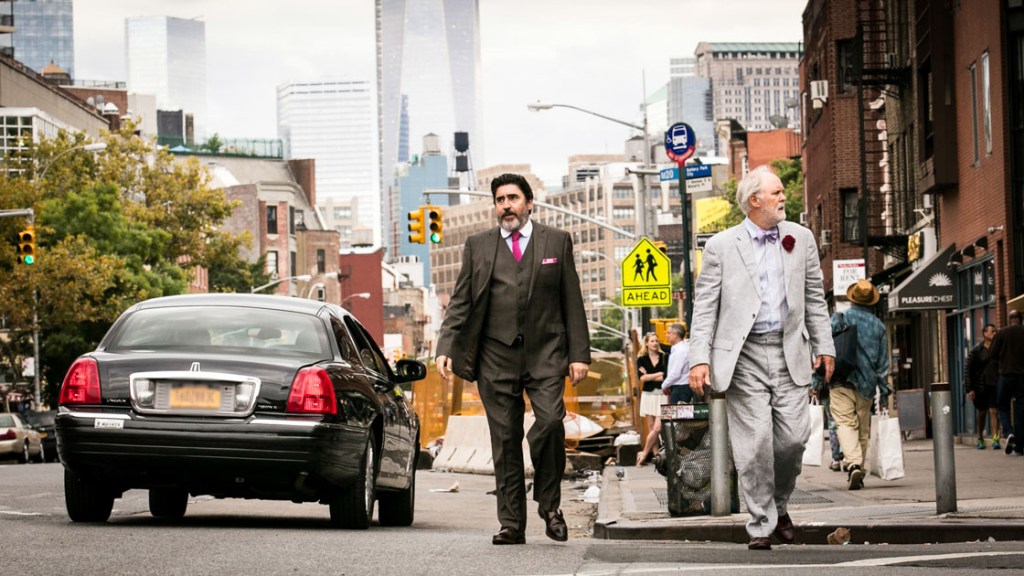 Land Ho would make a danceable A-side of an LP with Ira Sachs’s Love Is Strange providing a bittersweet side B. This also is a film about two older men — Ben (John Lithgow) and George (Alfred Molina). But they’ve been together for 39 years, have just gotten married, and, consequently, have their lives disrupted after the Catholic school where George has taught music for years fires him. With his salary, they can’t afford to keep their cozy, beautifully furnished Manhattan condo.

Sachs shows them hunting for a new, affordable home, mostly through the city’s demoralizing housing labyrinth. In the meantime, they’re essentially homeless. Ben moves in with his nephew (Darren E. Burrows), the nephew’s wife (Marisa Tomei), and their moody teenage son (Charlie Tahan). Ben gradually complicates their comfortable bourgeois arrangement. But George has it worse. He sleeps on a sofa in the apartment of a cop friend (Manny Perez) downstairs in their former building. The cop and his boyfriend (Cheyenne Jackson) don’t allow the houseguest to deter their house parties.

There is no grand drama, just a steady trickle of tragic irony: Two men officially commit to share their lives but can’t afford to share a bed. Another movie might have found an occasion for some kind of grandstanding about injustice. But Sachs isn’t that sort of director. He watches. This is the most alive of the four films he’s directed (the last, Keep the Lights On, was a different gay romantic tragedy). It operates with a pleasing mix of buoyancy and solemnity. Very quietly, this is a comedy of manners: How do you live with people you love but don’t want to know better than you already do? What results is amusing and sad. (Accordingly, Chopin rules the soundtrack.)

Love Is Strange isn’t perfect — I wish the side characters had more time to connect, in part because the actors playing them (including Eric Tabach, Christina Kirk, and Harriet Sansom Harris) are so good. And the movie feels complete well before it actually ends. (Also: Is there no legal solution to the firing and no safety net to steel against eviction?) But I can’t say enough about how smart and clear-eyed it is. And moving: I’m wiping tears off my keyboard as I type this. It doesn’t have the direness of Michael Haneke’s Amour, but it doesn’t have that movie’s severity, either. In the gentleness of its conflicts, Sachs’s film is closer to a family drama like Olivier Assayas’s Summer Hours. Yet there’s something acutely personal here, as opposed to exclusively referential, not as it relates to Sachs, per se, but as it pertains to anyone who’s eager for love but hasn’t sufficiently planned for life standing in the way. 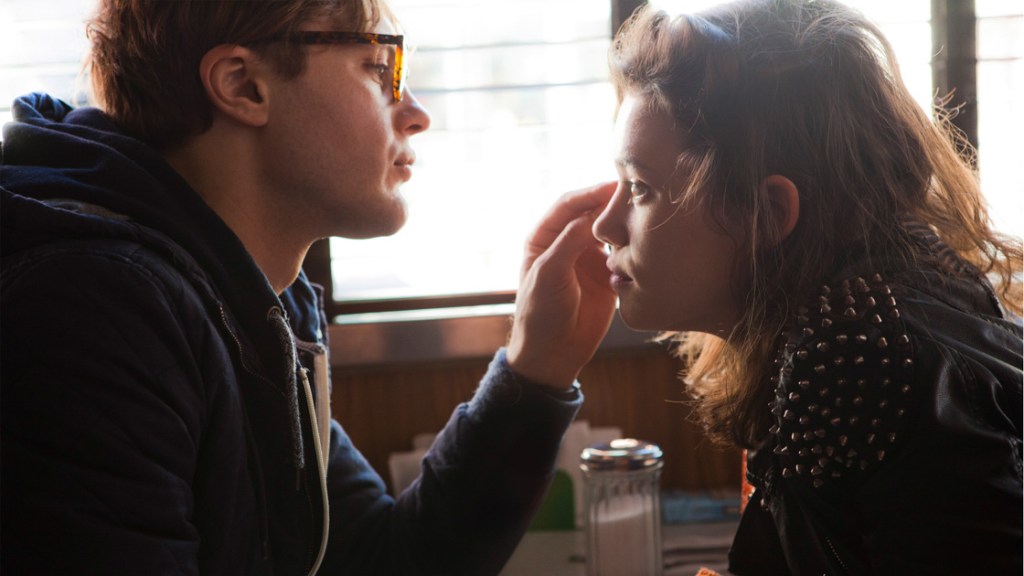 Sachs has made the kind of adult drama I like: patient, observant, honest, surprising, delicately written. It’s Nicole Holofcener with a cloth napkin in its lap. Earlier that day, I saw the opposite of Love Is Strange: a film desperate to be taken seriously. It’s a second work of speculative science fiction by Mike Cahill called I Origins, with Michael Pitt and Brit Marling as molecular biologists. The movie’s not worth ruining. But, loosely, it’s either about the limits of scientific explanation or how absurd Dr. Pitt looks in a bow tie.

This movie is all conceit. Pitt’s character has an obsession with the singularity of the human eye. He falls for a French woman (Astrid Bergès-Frisbey) with a lovely pair. You never stop feeling Cahill working to get the movie someplace profound. But it skates on a rigorously pretentious lake of pseudo-science. Stud-shouldered leather jackets, lab-bound lovemaking, the streets and apartments of Williamsburg, Brooklyn: This is a fashion magazine’s impersonation of academic wonder. There’s a weaponized elevator, a sudden romantic change of plans, one medical anomaly, and a trip to India. All of it feels like a screenwriter reaching for mystery but just coming up with lines like “Life is fucking weird.” The characters debunk Pitt’s theories, which only encourages the audience to do the same to the movie’s.

But there I was a couple of nights later at dinner arguing about whether this movie is stupid, intensely spiritual, or stupid about spirituality. People are leaving I Origins touched by their perception of depth. Cahill’s first movie, Another Earth, with Marling, is also a runaway emotional implausibility, but it has a cosmic sweet spot that’s missing here. The people who like the new film think it ingeniously captures the ideas of reincarnation. I just don’t think the movie’s as smart as Cahill thinks it is.

To some extent, the fighting being done over it is similar to the skirmishes that arose last year around Shane Carruth’s impenetrable Upstream Color. That’s a messier movie. But it’s the kind of mess only a talented, severely intelligent, highly ambitious weirdo could make. I Origins is a sane movie that’s pretending to be out of its mind.

Still, this festival needs directors like Cahill. Ultimately, this is an expensive-looking movie that is not looking to pick your pocket. (Fox Searchlight purchased it and plans to put it out later this year.) In its way, I Origins is still very Sundance: true to its maker. You don’t feel that Cahill is directing over the audience’s heads and into the studio’s executive offices. The movie is slick, but it’s not flagrantly commercial. Cahill actually seems close to where he wants to be as a director. Then there’s a filmmaker like Joe Swanberg, who appears to be taking his sweet time becoming whoever he wants to be as a filmmaker.

Swanberg’s got a new movie in the dramatic competition (he always has a new movie; this one appears to have been shot on Super 16). It’s called Happy Christmas, and it’s as conceptually slim as his other movies: A Chicago couple (Melanie Lynskey and Swanberg) put up his do-nothing sister (Anna Kendrick) in their basement. The actors sit around doing very little acting, and the characters remain slouched in their own ennui. But I liked this movie more than last year’s overpraised Drinking Buddies. Kendrick gets drunk and high, which annoys Lynskey’s character, a writer quietly frustrated at her domestication. Little of what happens is scripted.

Swanberg’s movies live and die by the improvised inspiration of who’s in them. Here there’s a scene between Kendrick, Lynskey, and Lena Dunham, who plays a friend of Kendrick, that gets into the alleged injustice of being a stay-at-home mom. Kendrick and Dunham’s characters don’t have kids, so they have the luxury of preaching feminism. But it’s a funny conversation, fueled by alcohol, that pushes the movie open. As a screen presence, Swanberg has a strapping carriage and a gentle nature that’s partially jocky and partially earnest. He and Lynskey are warm together. He’s even better with his son, a enormously expressive jumbo toddler who, after Lynskey, gives the second-best performance in the movie.

Little Swanberg almost rivals the actors who play the daughters in Maya Forbes’s Infinitely Polar Bear, which is a terrible title but a refreshing brand of cute. Mark Ruffalo plays a manic-depressive father and husband in 1970s Boston who takes care of the kids when his wife (Zoe Saldana) goes off to business school. There’s not much to this movie, but Forbes knows what she’s doing. The scenes are all playful, but they’ve got a real emotional edge and all of the children in the movie perform with a comical bitterness: They all feel cheated out of something.

Ruffalo’s character goes off his medication, and it’s the girls — played by Imogene Wolodarsky and Ashley Aufderheide — who do the parenting. Forbes gets a range of feeling out of them: glee, woe, but mostly exasperation. This is a personal film about life with a mentally ill person. Dad thinks it’s an adventure. The kids think it’s work. As Ruffalo’s parental fitness seems doubtful, Forbes’s light touch becomes a virtue (her use of music is a different story), and the comedy she uses to handle the girls’ mixed race is even better.

Ruffalo and Saldana are both good, but the two kids are a real shock. They’re playing the injustice of the responsibility of taking care of an adult even though they just want to be kids. They capture the annoyance and confusion of their roles. This festival has a soft spot for young actors: Keisha Castle-Hughes; Jennifer Lawrence; Quvenzhané Wallis; Miles Thompson and Brandon Ratcliff from Miranda July’s Me and You and Everyone We Know. I should remember to tell my pal about Wolodarsky and Aufderheide. They need another movie immediately, and I’m writing it now: Land Ho! 2.