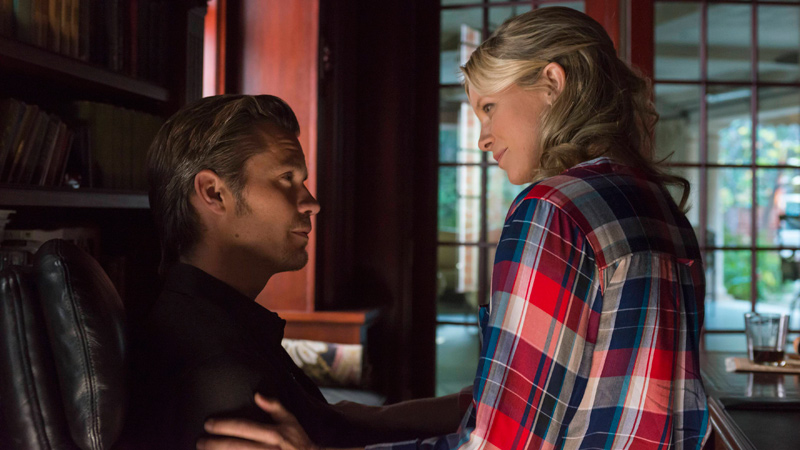 Last week, on Justified: The Florida Crowes alighted at Audrey’s; Lee Paxton is alive and Mooney menaced Mara to try to get her to implicate Boyd in his beating; the Crowder-Duffy Narcotics Concern’s last shipment from Canada was attacked; Loretta played Raylan like a Bennett family picnic fiddle; Raylan threw H.R.’s operation out of Kentucky; Raylan moved into a seized mansion and cuddled up to Loretta’s comely case worker. Also, Avon Barksdale!

So our intrepid hero’s bowling date with Allison appears to have gone well, judging by the amount of second-base action happening on Mr. Monroe’s foyer staircase. Olyphiles will note this is the second stair-based love scene of his career (after Go with Katie Holmes), while the rest of us are treated to a painful closeup of some truly unfortunate choices in stairway runner pattern. The evening’s activities are subsequently interrupted twice; first by Art informing Raylan of Monroe’s release, later by a car alarm that at first seems to be a boner joke but is instead some guy with a shamrock tattoo in bad need of a hot oil treatment sitting on the hood of the borrowed Mercedes and tapping the bumper with a bat.

As a result of these interruptions, Art sends Rachel to stay at the house with Raylan (“We call it backup”), a development that causes Raylan no end of visible and audible irritation; Rachel, to our amusement, is so serenely entertained by his state that she’s either (a) weirdly out of character, or (b) totally onto the fact that he’s got a ladypal, even before she sees Allison on the front steps. Plot twist the first: Allison knows the batman, who apparently wasn’t there for Raylan or at Monroe’s behest at all. His name is Henry; she’s responsible for putting his son into foster care, and he says she planted meth on him to do it. Between that and the joint she so comfortably prepared in front of him, Rachel wonders aloud whether Allison’s in on some scheme involving the Monroe estate. We’ll come back to this.

We discover that when Monroe said Gloria was his maid, attending to his “more personal needs,” he did mean Those Needs, as she’s seen refastening her bra while he’s in the bathroom. In between dispensing racist jabs, canoodling, and actively choking/smothering his companion, Monroe exposits for our benefit that there’s a stash of gold hidden somewhere in his house. Gloria turns up to retrieve it, interrupting the Raylan-Rachel back-and-forth. They send her back to Monroe, under threat of jail time, to tell him the safe — installed by one Wynn Duffy — is empty. Which, technically, by that point it probably is, the marshals having stashed the gold in a secure warehouse and all.

All of which leads to a Raylan-Duffy chat in the Duffy trailer abode, and Mikey shooting Monroe when he shows up to kill Wynn, and Raylan and Allison daydrinking in the Monroe library again, picking up where they left off.

Mara details Mooney’s abuses to an awake and crabby Lee, with Mooney in the room. Lee responds by putting Mooney in charge of Mara’s safety and instructing him to kill Boyd, to which Mooney responds with a look like he’s been asked to skip his lunch break and pick up Lee’s dry cleaning.

Between the search for the leak that led to the shipment interception and Ava visibly losing faith in his abilities to spring her from that Delroy matter, Boyd is operating at peak aggravation levels by the time Dewey shows up, at Daryl’s urging, demanding a refund of the money he’s been told he overpaid for Audrey’s (half of which is to go to Daryl to keep him moving right on past Harlan). And it’s Walton Goggins’s turn for center-stage speechifying this week, as he transitions from almost paternal exasperation at the chances Carl brings the source of the leak back alive to smooth-talking Dewey into standing up to Daryl. (Somewhere, on whatever plane of afterlife he wound up, Gary is proud.) Back at Audrey’s, Dewey attempts to confront Daryl (“This here’s my whorehouse. My dream.”) only to be led into the back, where Wade has been stuffed headfirst into the dryer and confesses to skimming from Audrey’s intake at Boyd’s command. Daryl gives Dewey a gun, and Wade joins our body count watch list for Week 4.

Mara summons Mooney to the Paxtons’; the front door’s wide open and she’s fresh out of the shower, and juuust when you think we might be in for more Mooney-on-Mara creeping, here’s Boyd with a gun to Mooney’s head, and Mara with a vicious twist to his crotch. Mooney, it should be noted, goes wimpy in a HURRY, to the point where you have to wonder if he might be planning a couple of moves ahead, and that’s even before he hears they want his help in faking Boyd’s death for Paxton.

Later, at the bar, Boyd and Mara are drinking and smoking and plotting their course, and Mara gets the bright idea to put fake Boyd tattoos on a dead body, which requires Goggins to remove his shirt, serving the show’s second major swooning faction. The relics of his skinhead days, the bullet wound where Raylan missed his heart, a scorpion on his shoulder blade we don’t remember seeing before are all drunk in by Mara and the camera, and though Boyd stands frozen just a shade too long after Mara gets briskly back to business, the tension dissipates beautifully into what could be the beginnings of a very entertaining friendship.

And right before the end credits: It’s Carl! With a live leaker! It’s Candy, she of the Pop Rocks from the second episode, folded into a trunk, and she does have the contact information of the responsible party for the attack on Boyd and Duffy’s men. Guessed yet?

Johnny Crowder, the Boyd-thwarting enthusiast who as near as we can recall was something of a loose end in Season 4, was last seen in the penultimate episode winding up on the wrong end of the Ellen May Scavenger Hunt and Jamboree.

We’ve reached the point in the season when the pellets are yet to fly but the air gun’s been vigorously pumped, so to speak, and it’s always right about now when we start catching ourselves watching for moments that’ll come back in big ways later on. Mara having cold hands. Allison stroking Raylan’s gun in the holster. Pretty much everything Allison does, actually; when Rachel voiced her suspicions, we flashed back immediately to our first glimpse of Allison on the city steps and her maybe too-perfect flusterment, and how breezy she is leaving that first night, but she wades right into Raylan’s reservations (such as they are) so deeply in that last scene that she’s setting off mental sirens with every line.

None in evidence, though don’t go making spring break plans just yet with Wade, Cyrus, or Candy. Boyd’s ear wound, you may be interested to know, is down to a bitty ole bandage. Get well soon, little fella.

Wilting and asymmetrical in the visitation cell with Ava; fully erect with Mara and Mooney.

AVA: Still imprisoned, much to her consternation.

WENDY: Not in evidence with the Crowe boys at Audrey’s, leading us to believe she stayed behind in Miami, tempting us to dump her from the Dametracker in favor of …

GLORIA: Talking her way past the marshals with pH levels and fish prices, putting up with Monroe’s various depravities for reasons known only to her, and reminding us upon Googling that there’s somehow still a Bring It On sequel we haven’t seen.

Cyrus getting hauled into Boyd and Wynn’s lair to confess to being the leak in the operation leads to several unimportant but delightful discoveries:

• There is a lamp in there that seems to be made out of a gasoline can that we have never noticed before.

• For what has to be the first time in this series, Wynn Duffy wears a look of perfect, uncomplicated joy as he takes pellet-gun potshots at Cyrus while Boyd’s on the phone.

• A robust national discussion regarding the feasibility of Daryl Crowe Jr.’s accent.

• That all the marshals keep moving into the Monroe house one by one until a sitcom spinoff about their household chore wheel is necessitated.

Where is Art in his quest to determine Raylan’s involvement with the Augustine murder? What happened between Raylan and Allison while the credits were rolling? Jimmy is totally keeping Candy’s phone for himself, right?

Sundance Diary, Days 5-6: The Happiest Movie You'll See All Week, and the Most Ridiculous