‘Justified’ Season 5, Episode 2: The Gang’s All Here in ‘The Kids Aren’t All Right’ 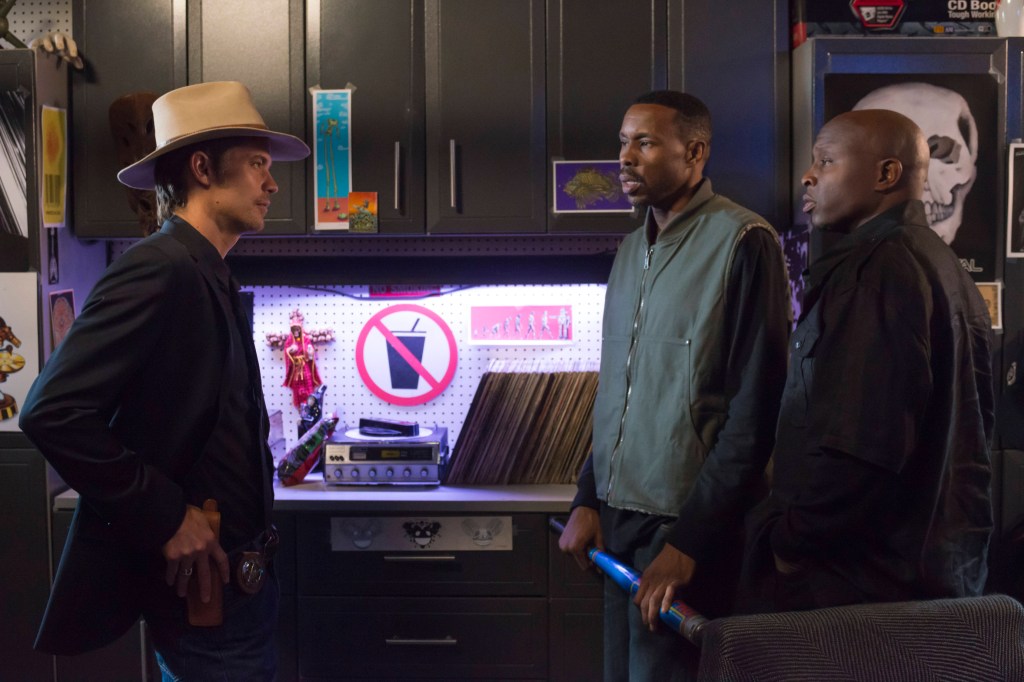 In the Season 5 premiere, Justified flung itself out on a north-south axis stretching from Detroit to Miami; Episode 2 sees it contract back to its native ground of Kentucky. Remember how at the end of last season Raylan had Nicky Augustine pretty emphatically killed, by Tonin and his henchfellows? And remember how Raylan tipped the Florida Crowe clan off to Dewey’s recent good fortune, via his loud conversation with Marshal Sutter near the Haitian? From this shallow distance, those choices appear poised to generate at least the early central conflicts of the new season.

Stay with us; this gets a little circular: “The Kids Aren’t All Right” opens with the brothers Harris, recognizable to you as The Wire’s Avon Barksdale and The Practice’s Eugene Young, menacing an entry-level manager sort in their drug trafficking trade who’s come up short on a promised cash delivery. All three turn out to work for the great gingery beast H.R. Dunham, he of the aborted wet weed buy and hunt for Mags Bennett’s money a couple of seasons back. The responsible party is none other than Mags’s unsanctioned foster daughter, Loretta, and her intolerable beau, Derek, who drift onto the radar of the Lexington police department after selling weed to a lieutenant’s kid. Raylan, pulled from a satisfying afternoon of seizing the assets of Detroit mob money-launderer Richard Monroe (Xander Berkeley, in a too-short Tim-and-Rachel scene) to deal with Loretta, finds himself extracting the pair from an escalating series of situations before corralling the Harrises, Loretta, Derek, H.R., and five of H.R.’s gun-toting besties in an attempt to settle the kids’ debts to Memphis. This is actually, strangely, Raylan’s first meeting with H.R., and it’s about as cordial as you’d expect (“Just ’cause I knew your daddy, don’t think I won’t have you killed right now,” which, we’ve all been there), though keep an eye  out for the fondness in H.R.’s eyes as Raylan reminisces about Arlo trading mining equipment for cocaine.

And then Tim Olyphant gets to do a little speechifying in the particular manner of Leonard and this show, one of those rambling runs of prose that starts out as a story and ends up something more, and he’s so, so good at these, at delivering them just short of flat but making every word convincing, and making every syllable live in his lungs before it rolls out to the rest of us:

“You get what I’m saying? Even before I went to Glynco, and trained to be a dead shot, I’d seen people kill one another. And I learned to be ready. In case they came after me to do me harm. In other words, I’ll kill four of you, before you even clear your weapons, and I’ll take my chances with the other two, and you see this star? That’s gonna make it legal.”

Dropping Loretta off at her foster home the next morning, Raylan calls her out on everything, and while he’s doing it, take a minute to appreciate Kaitlyn Dever’s work in this hour, from delivering an apology we’re not supposed to believe all the way at the jail to tears we are supposed to believe in the marshals’ offices, and watch how she even talks like Raylan, almost affectless, as she says, “I didn’t play you, Raylan. You are who you are.”

One last bit of business: Sammy Tonin called for Raylan while he was in Florida, less than a day before Tonin’s death in Detroit. Just the tone of Art’s “Yeah, yeah” when Raylan asks whether everything’s good should clue you in that it’s not, but just in case, he’s seen in the closing minutes speaking to a marshal up in Michigan, and while he may not know the half of it yet, he’s at least suspicious enough to wonder where Tonin was the night Augustine died.

Lee Paxton is alive at the episode’s onset, in a medically induced coma. Nick Mooney, last seen being punched by Boyd in the Great Delroy Body Do-si-do of Season 4, shows up to run his hands through Mara’s hair a little and get her to implicate Boyd in the attempted murder of her husband, which she somehow manages to do without becoming the second character in the space of three episodes to take a swing at Mooney’s jaw. When the police bring Mara to Boyd, though, she denies it was him. Mara confesses later that if she’s not married for 10 years, she gets nothing, thanks to her prenup, and she wants that $300K to pay her way back home to Latvia. William Gregory Lee kinda looks like Michael Shannon, so it’s already an easy chore to think him capable of unspeakable acts, but as thuddily as he wades through Mooney’s first scene at the hospital, he’s waaaaay better at bad-copping Mara on a dark road, threatening to arrest her for Lee’s beating. In the episode’s closing moments, Paxton’s eyes open and he croaks his wife’s name.

And Boyd’s shipment from Canada, their last shipment, gets hit prior to his arrival.

And Dewey, frolicking with two ladies at Audrey’s again, is again interrupted, this time by the unwelcome sight of Daryl, come all the way to Kentucky.

H.R.’s shortchanged employee in the first scene; at least three runners we can see at what was to be the site of Boyd’s final drug delivery from Canada; our ability to ever even look at a packet of Pop Rocks again.

RETRACTED, FOR THE MOMENT: Lee Paxton.

It was right to wonder, after last year’s season finale, watching the hero of the hour walk away from Nicky Augustine’s limo as it was riddled with a frankly wasteful amount of bullets, if we were setting up for a dark turn for Raylan. Through two episodes, he’s holding up pretty Raylanly, but don’t forget, as the Crowes descend, that just as he brought whatever hell Art’s about to rain down on him for his involvement in the Augustine murder, so, too, did he draw the Crowes up to Kentucky, running his mouth about Dewey’s money.

Those who hold to the cult theory that Walton Goggins’s hairstyle can foretell the events of the show will find plenty to unpack this week. Good height, but the direction is just all over the place. Walking a razor line between feathered and frazzled, and wavering.

AVA: In jail, understandably skeptical at the notion Boyd “accidentally” beat, rather than bribed, Lee Paxton.

WINONA: Only referred to; still in Florida with the cherubic Raylanspawn.

MARA: Working Boyd for an exit from the States.

WENDY: Neither seen nor heard from.

ALLISON: Loretta’s social worker, introduced in this episode; beginning with Raylan on the front steps and ending in Monroe’s seized estate, enjoying Chinese food and wine with our protagonist.

Mara even knowingly falling for Jimmy’s lure to the stairwell when this is what Jimmy’s face looks like: 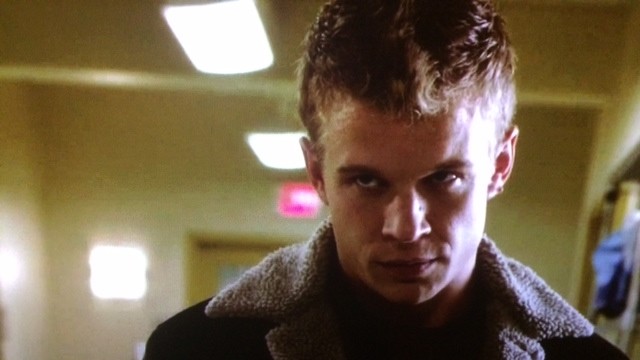 Plot Detour of the Week

The facial expressions of Dewey, Wade, and Carl during Wade’s version of quick thinking.

2. “Unless Hitler has risen from the grave, and is in my whorehouse, go away right now, Messer!”

More Tim-and-Rachel [repeat demand as necessary]; that H.R.’s banishment from Kentucky not preclude future appearances by the Harrises.

Are we seeing the genesis of a Season 6 supervillain Loretta? Just how far is Art prepared to pursue this line of questioning, and how will he measure the harm threatened to Raylan’s family against Raylan’s orders to stay away? Was the bowling alley sanitized after Raylan moved into Monroe’s house? Are there black lights in it?

Shakira and Rihanna's Ska-riffic 'Can't Remember to Forget You'