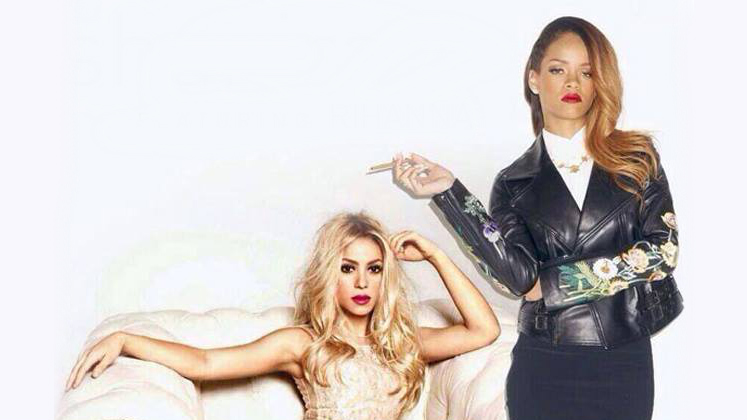 Finally, here comes the next wave of ska! And riding it on their serfborts are Rihanna and Shakira, teaming up for an all-star duet. The two wrote their latest single, “Can’t Remember to Forget You,” with Swedish pop wunderkind Erik Hassle; producer Daniel Ledinsky; Tom “Kid Harpoon” Hull; and John Hill, a producer and songwriter best known for his work with Santigold and MIA, who also worked with Shakira on “She Wolf.” The song is immediately refreshing because it tries out some things that don’t feel totally stale right now. It doesn’t sound like a Dr. Luke song, nor does it sound like EDM whatsoever. Instead it draws on reggae and ska, and for the chorus, something verging dangerously close to nu-metal. Having mined every sound from the early ’90s, I guess it’s time for the pop world to bring the mid-to-late ’90s back in style. This is a pop-ified take on the pop-punk version of the 2 Tone sound, which was itself a new wave British bastardization of Jamaican dub music.

Shakira is coming off an absence of more than a year, returning to the revolving chairs of The Voice. Rihanna has a big hit right now singing the hook on Eminem’s lumbering “The Monster,” but has yet to announce a follow-up album to Unapologetic. Her last solo single was “What Now,” which peaked at no. 25 on Billboard. Not a bad performance, but not up to Rihanna standards. Every pop star is under pressure to release something that can compete with Beyoncé’s all-powerful self-titled album, but particularly Rihanna, who had always had a slight edge over Bey when it came to raunchiness and modern production. Should Rihanna change lanes herself and continue to put out vulnerable ballads like “Stay”? Or should she try to up the ante on Beyoncé’s “Partition” and do something even more raw? I’m not saying I know how, but maybe put a mic on her pussy pats.

This is neither a step forward nor backward for Shakira or Rihanna. It’s just a step sideways. It’s the first official single from Shakira’s as-yet-untitled upcoming album, and if it feels more Shaki than Riri, that’s only to be expected. One of Rihanna’s best qualities is her ability to lay back in the cut and not steal the spotlight in every collaboration. I like duets in general, so maybe I’m a mark for this song, but I think it works just fine. Maybe it’s not spectacular, but it works as a reintroduction of Shakira to American radio by way of Rihanna. And Rihanna can spend however long she wants doing collaborations and side projects, because she has been working nonstop for the last decade and can chill if she needs to. She’s probably got a secret album, too, though.

The collaboration was first leaked on Twitter in December by Shakira’s body double (Shakira has a body double! SHAKIRA!) and confirmed accidentally by Pitbull, who told a radio show that Rihanna had to pull out of “Timber” for “something she had to do with Shakira.” She was replaced by Ke$ha, which was a blessing for Ke$ha, giving her the first big hit she’s had since the underwhelming response to her sophomore album, Warrior, and putting her in a slightly better position from which to argue her way out of a draconian eight-album contract with Dr. Luke.

The video for “Can’t Remember to Forget” is being directed by MTV’s Making the Video standby Joseph Kahn, who has helmed music video classics like the Geto Boys’ “Straight Gangstaism,” Korn’s “A.D.I.D.A.S.,” Backstreet Boys’ “Everybody (Backstreet’s Back),” DMX’s “X Gon’ Give to Ya,” and Britney Spears’s “Toxic.” Kahn directed the video for Brandy and Monica’s “The Boy Is Mine,” so trust that he knows how to light and shoot two divas properly. Critical response to the song has been mixed, but I give it a lot of points for not sounding like Tiësto, even if it reminds me a little bit of Sugar Ray. Sugar Ray was good! It was very good. I have to go now.

'Justified' Season 5, Episode 2: The Gang's All Here in 'The Kids Aren't All Right'