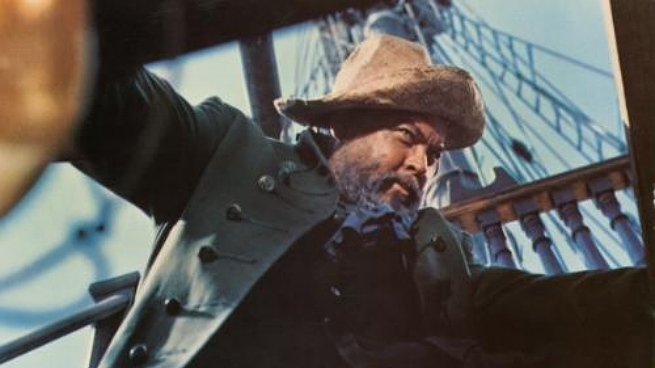 With Michael Bay’s pirate saga Black Sails making its debut on Starz this weekend, we thought it’d be a good time to recognize our favorite high-seas robbers, bandits, and ne’er-do-wells.

Bryan Curtis: Before he sold fish sticks, Long John Silver was once played by Orson Welles. The movie was 1972’s Treasure Island, a curio that shouldn’t be confused with the cuddly Disney version. You should watch it to take stock of Welles’s career, circa the early ‘70s, in the same way a doctor consults the chart of a patient who’s about to croak.

Every Welles production is doomed to have “conflicting” accounts. Some say the producer reneged on making Chimes at Midnight. Others say Welles was using Treasure Island as a ruse. As it happened, Welles did not film Treasure Island until nearly a decade later for another director. He changed his writing credit to “O.W. Jeeves.” It was no longer auteur stuff; it was a job.

“Jim Hawkins, he’s too nimble for my likin’.” This is Orson Welles speaking pirate. The biographer Joseph McBride notes that Welles “dubbed the entire part in a Rome studio one night while guzzling from a bottle of white wine.” Welles’s fatness required a lot of very, very, very tight shots. The book This Is Orson Welles tells us that Silver’s monkey belonged to Welles and that it was named Mimi. The performance is pretty terrible and utterly compelling. Like nearly every Welles story, the moral is about passion projects and hackwork and the vast ocean between them.

Mark Lisanti: The delightful thing about this trailer from Ye Olden Tymes of 1984 is that it explains everything. That voice-over is not a gag. It’s trying to be helpful. To sell you on a low-budget sci-fi comedy that sneaked into theaters in the wake of Return of the Jedi, much to the indiscriminate delight of children who could convince their parents to take them to the theater to titter uncontrollably at “space herpes.” (IMPORTANT NOTE: A “space herpe” is not an STD. It’s … something else. Though it could probably complicate one’s sex life under certain unfortunate circumstances.)

Anyway: There are pirates in this thing! Space pirates. And Ron Perlman. And Anjelica Huston!

Neither of them played the space herpe, BTW. People had their dignity, even in 1984.

The Pirates of Penzance

Molly Lambert: Man, did I ever used to watch the film version of The Pirates of Penzance starring Kevin Kline from 1983 all the time as a kid. Anyway, here’s Kevin Kline doing the “I Am a Pirate King” number, because you deserve it. Johnny Depp owes Klein some serious royalties for purloining his whole “flamboyant pirate with a corked-on mustache” bit. Did I mention Angela Lansbury is in this perfect movie? What about Linda Ronstadt, did I mention Linda Ronstadt? I’m actually going to go watch this again right now.

Andy Greenwald: Everyone knows George was the funny one, right? There’s no way Lennon would have turned “Imagine” into a shanty about the Jolly Roger. And he definitely wouldn’t have done it on television.

Andrew Sharp: It was one of the only movies my family owned when I was growing up, so of course I’ll love it forever. It’s Kurt Russell’s best work, and Martin Short is the perfect foil for a glass-eyed, hungover savant. High jinks on the high seas!

It sports a 21 percent rating on Rotten Tomatoes, but that’s complete horseshit. If you’ve seen this movie and love it, I pretty much know for sure that we’d be friends.

Mainly, though, shout-out to the person who uploaded like 12 different 30-second clips from Captain Ron to YouTube, plus one John Denver song and a clip from Dirty Jobs. That guy’s clips are pretty much the extent of the Captain Ron footage on YouTube. (All the clips are great, obviously. CAPTAIN RON FOREVER.)

Tess Lynch: It’s unfair to call Blackbeard weak just because he wore his beard in pigtails with ribbons. I think that kind of style can be really intimidating.

Amos Barshad: He had an eye patch, wore a lot of jewelry, and was a charming rogue who brooked no authority — I never quite thought about it before, but clearly Slick Rick was part British-Jamaican, part Bronxite, part pirate.

Charles P. Pierce: “C’est mon affaire!” says Basil Rathbone, as Captain Levasseur, lapsing into French for no particular reason, although his French is better than the Irish brogue that comes and goes with Errol Flynn as Captain Peter Blood. This is the one that got me started. This is the reason I remain an aging epée hack to this day. It isn’t very good fencing; Flynn looks like he has a piano on his back and Rathbone, who actually could fence — but, apparently, not as well as he thought he could — has to lose to him, and looks very unconvincing. (This is the old-movie fencing equivalent of shaving points. If you want to see the real thing, try Tyrone Power and Rathbone in The Mark of Zorro. There’s a crucial counter-disengage that will curl your hair for you. I was Zorro for 15 consecutive Halloweens, up to and including my freshman year in college.) Nevertheless, this is not only the pirate movie that sent Flynn off to stardom, but the one that launched the career that Peter O’Toole so brilliantly spoofed as Alan (“I’m not an actor. I’m a movie star!”) Swann in My Favorite Year. Just for that, it’s worth it. You can also pick up a little English history if you’re not careful. And it’s directed by Michael Curtiz, who would later do Casablanca, where the only dueling was at the roulette table.

Sean McIndoe: This is my kids’ favorite episode of Backyardigans.

I have heard this song roughly 9,000 times. Not in my life. I mean today. Do not watch the video, because that song will burrow into your skull like a hungry earwig and be stuck in your head for the rest of your life. This is a cry for help. Help me. WHY IS NOBODY COMING TO HELP ME???

(Or at least to switch it over to the “Ridin’ the Range” episode. That song kicks ass.)

Zach Dionne: Go ahead and pay to see The Lego Movie in theaters in a few weeks if you must. It’ll only mean you’re a schmuck, since there’s already a half-hour fan-made Lego PIRATE film kicking it on YouTube. (Kidding, of course — there is no Lego saturation point. See every Lego thing you can.)

Katie Baker: Will no one else think of the software pirates? The lyrics to MC Double Def DP’s 1992 work “Don’t Copy That Floppy” are pretty end-of-days:

Tetris and the others, they’re all gonna fail

The screen starts to tweak, and then it will fade

Programs fall through a black hole in space

Loses its life and the screen goes dark

Damn. For more on the subject, might I suggest this surprisingly transfixing 30-minute episode of Computer Chronicles from 1985? (I particularly recommend everything from 12:15 onward. Captain Crunch and Frankie Mouse!!) “Nowadays a pirate doesn’t need a black eye patch, a sword, or even a wooden leg,” opens the segment. “All you need is a floppy disk … and maybe a little ingenuity.”

Sundance Diary, Days 5-6: The Happiest Movie You'll See All Week, and the Most Ridiculous

Rashida Jones Will Star in 'Tribeca,' a Police Procedural Comedy From Steve Carell