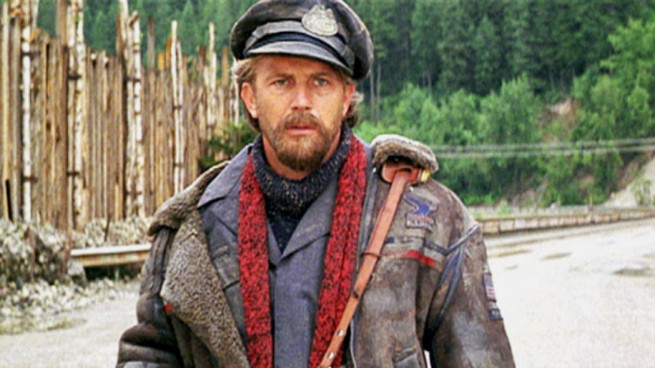 The McG–Luc Besson spy venture 3 Days to Kill hits theaters this weekend, starring Kevin Costner as some kind of secret agent who has to take one last assignment. At 59 years young, Costner has nearly as many film credits to his name, but the level of quality from performance to performance … how shall we say it … varies. This week the Grantland staff has gathered some of the greatest Costner hits and done you the service of deciding, once and for all, whether they are Good Costner or Bad Costner. You’re welcome.

Dan Silver: The Untouchables is Costner at his clean-cut best. As Eliot Ness, his transformation from naive good Samaritan to cold-blooded, worn-out cop is a subtle one, but nonetheless effective. In 1987 Costner’s youthful SoCal glimmer had not yet been squelched by critical and public dredgings due to unscrupulous accents, deluges, and the mail. It’s Costner wearing Armani, speaking Mamet, standing alongside James Bone, while being shot by a (hacky) director who was still at his zenith (albeit a hacky one) but was two to three pictures away from entering the long and painful denouement of his once lauded (yet hacky) career. And even though Costner played a real (great) cowboy in Silverado, The Untouchables provided him a more mature opportunity to speak softly and carry a big stick, all while looking mighty patriotic.

Holly Anderson: There are any number of ways, if you’re so inclined, to do a good Robin Hood story. The tale is ready-made; all you really have to do is show up for it, and you don’t even have to try to match the easy grace and ebullience of the genre’s best work to turn out a good piece of entertainment. Robin Hood has been played with swashbuckling cheekiness, entirely for laughs, as a cartoon fox, and as a moody heartthrob dropped in a barrel of anachronisms, and it’s all worked.

And then there’s 1991’s Prince of Thieves, which takes a bold stance against Robin Hood being or having any fun at all, and in which Kevin Costner makes a visible choice to play Robin Hood as … bored.

Here is what should be one of the emotional high points of the film, and here is Robin Hood addressing Sherwood refugees with the air of a man telling his homeowner’s association that crushed sandstone, and not gravel, is the best covering for the community garden walk. Here is what should be a rousing montage of preparations for and early actions of rebellion against unjust rule, in which Robin Hood quietly goes about his tasks while a gang of French horns serves as his hype man. It’s a weirder performance set against the choices being made by a gamely soldiering Christian Slater and especially Alan Rickman as a live-action Grinch, chomping through scenery to a degree that would make Jim Carrey blush through green face paint. Just imagine if this Robin Hood were sitting next to you in a theater, listening to Bryan Adams croon, “Everything I do, I do it for you,” over the closing credits, and picture him letting out an apathetic sigh and finishing the line: “… I mean, I guess.”

Sean Fennessey: I have met a handful of golf pros in my life. What’s great about this version of Costner is that he is both exactly like all of them — prideful, strangely gifted, insolent, underachieving — and nothing like them. Because he follows through. Even if it takes 12 tries. Ron Shelton and Costner deserve one more go together.

netw3rk: I’m a fan of dystopian fiction. There’s no better genre for dissecting the human race’s existential and often subconscious neuroses about government, man’s inhumanity to man, the environment, technology, etc, etc. Which bring us to Kevin Costner’s extinction-level box office bomb, 1997’s The Postman. Weird Costner stat: He has directed four films — two Westerns (Open Range, Dances With Wolves) and two postapocalyptic dystopias (Waterworld, for which he was uncredited, and The Postman). And The Postman is really a combination postapocalyptic Western dystopia.

In The Postman, a nuclear war 15 years prior to the events of the film has reduced the population of the former United States to the civilized townsfolk of a few dreary walled villages living in constant fear of the marauding neo-Mongol armies that rampage across the countryside. Enter our unnamed hero, played by Kevin Costner, who, quite by accident, ends up donning a mailman’s uniform that he finds in a wrecked postal truck. Using the uniform and accompanying mail-filled mailbag, he bluffs his way into a town under the pretense that he is an actual mailman working under the authority of a newly constituted United States government. This small bit of wasteland cosplay fans the vestigial flames of mom-and-apple-pie patriotism buried underneath the ash, which eventually inspires an armed movement of like-minded mail carriers that defeats the despotic warlords, and, much later, results in a reborn United States of America.

This is a shit movie, wearyingly overlong, with incomprehensible action sequences and a love story that features negative onscreen chemistry. What is interesting, though, is the underlying concept: that a symbol based on a lie could become the rallying point for a people and the basis for a society. It’s just a shame Costner didn’t explore that at all; instead, the movie basically takes the stance that lying to people is a net good as long as the lie is sufficiently comforting. Anyway, here’s my favorite scene from The Postman, in which Tom Petty, inexplicably playing himself, allows the Postman to enter Bridge City.

The Upside of Anger

Andy Greenwald: The Upside of Anger is correctly remembered (if it’s remembered at all) as a dazzling showcase for Joan Allen and the steel cable tendons in her neck, which she clenched and unclenched throughout with dazzling virtuosity. But Mike Binder’s severely underrated film also gave Kevin Costner one of the best roles of his long and occasionally bumpy career. As Denny, the next-door neighbor, drinking pal, and, eventually, love interest of Allen’s furious widow, he’s wonderfully shambolic, a midafternoon buzz made flesh. For much of the movie, Denny is essentially Crash Davis mixed with a little bit of Lebowski, until the scene above, in which he finally gets tired of soaking up other people’s bile and kicks in a bathroom door. “I am so sick of being your bitch!” isn’t quite as iconic a line as “I believe in long, slow, deep, soft, wet kisses that last for three days.” But it’s a little more honest.

Charles P. Pierce: There is a lot to be said about Oliver Stone’s JFK, and some of what can be said isn’t very good, but one thing you can say is that it is a goddamn technical marvel. Its use of actual archival footage is brilliantly mixed into the narrative. (My general take on the subject matter is similar to that of Norman Mailer — that, sometimes, if you are attempting to refute obvious bullshit, it takes a superior brand of bullshit.) Nowhere is this done with more pure craftsmanship than in this sequence in which the Zapruder film is edited into Stone’s original filmmaking to depict the last few seconds of John Kennedy’s life. And there’s Costner, in his linen suit,and with that Looozi-yanna accent that has come and gone throughout the three hours like a radio station groping for a station, narrating the events in Dealey Plaza as they unfold for the jury, until he gets to the final chorus:

With Kennedy’s head exploding, over and over again.

It can be argued —seriously — that what Stone is doing here comes dangerously close to pornography. What saves it is Costner, who is so blandly matter-of-fact about what he’s saying, with etoufée dripping from every incisor, that his eventual Stone-inspired raving later on — “Do not forget … your dying king!” — seems to have been written for another character in another movie. In this scene, though, Costner, as Jim Garrison, lets what it on the screen carry the question, and you can hear a country whispering, in response, “Oh, come on…”

Molly Lambert: Every ’80s movies star worth their salt has a Porky’s-type sex comedy among their credits. Costner’s is also his first onscreen appearance, in a Troma Studios sexploitation beach movie from 1981 called Sizzle Beach, U.S.A., alternately titled Malibu Hot Summer. It’s the story of a bunch of hot girls who can’t stop taking their clothes off. Costner plays one of the guys who gets the girls to take their clothes off. I enjoyed this movie! Just read this review from YouTube commenter John Duffy III: “I did watch this and it was excellent, this movie had it all, hot naked babes with very big tits and heavenly bodies, super hot bikini bathing suits and comedy as well!” Or take it from the movie’s trailer, which emphasizes its minimal Costner content to the max: “Featuring Kevin Costner, one of America’s hottest new movie stars!”

Emily Yoshida: The Big Chill, which in 1983 served as a mass breakout film for its still nearly-universally-beloved ensemble, also contained one of the most significant role cuts in recent film history: Costner as Alex, the classmate of the Chillers whose suicide is the catalyst for the big kitchen-dancy, Motowny reunion. In the opening credits sequence, Alex’s corpse, slashed wrists and all, is prepared by a mortician, but other than that, all the flashback scenes originally written by Lawrence Kasdan to give more insight into the departed tortured genius were cut, never to be seen despite repeated demands by TBC diehards. Alex is supposedly also lying out in a pine box in the church where the above funeral scene takes place, but we never quite see him; the ghost of Costner’s delayed big break lingers. And here’s a short excerpt of a Q&A with Kasdan from last year in which he talks about calling up Kev and explaining that his first serious actor role was resting peacefully on the cutting-room floor. Both within the film and outside it, Costner is the void that has become the source of the most questions in his absence, but the audience at the Q&A still laughs, because they’ve seen Waterworld and they know how this story ends.

Do You Like Prince Movies? Podcast: Beyonce Rumors and Paul Verhoeven's Career