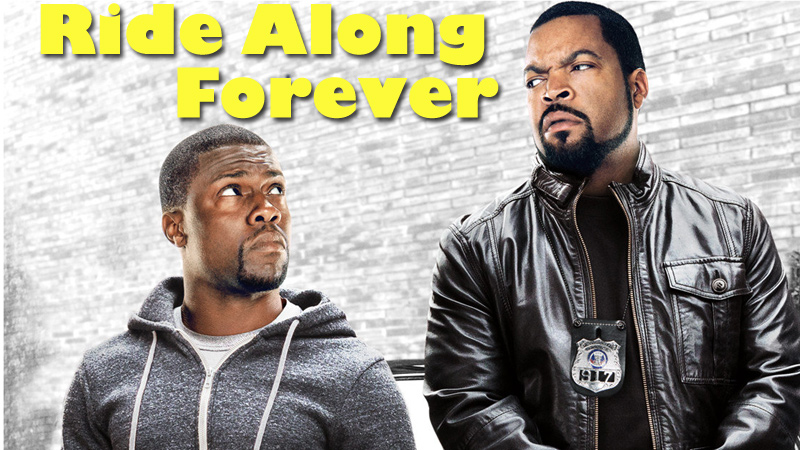 Ride Along — in which Kevin Hart, a lippy security guard, must win his fiancée’s hand in marriage by surviving a patrol night out with Ice Cube, her skull-crushing cop brother — was slotted for a sequel even before hitting theaters. But now that it’s spent the past few weeks outperforming everyone’s wildest expectations — $120 million in box office? $120 million in box office?! — it’s getting that sequel, and fast. Deadline says that Cube and Hart and pretty much everyone else from the first one are already signed on, and that they’ll look to start shooting by summer.

Which means we might as well go ahead and deal with reality here. Between the fact that Ride Along is affordably made and imminently repeatable, and the fact that Kevin Hart is insanely indefatigable and ruthlessly unchoosy, we are in dire danger of seeing this thing get sequelized into infinity. I really don’t think I’m exaggerating when I say we’ll probably be getting new Ride Along sequels up until the very day Skynet shoots out the sun.

So: What might the future hold? We stayed up all night chugging green tea and chowing palmfuls of Count Chocula to come up with a few educated guesses.

We pick up a year since the events of Ride Along, in which Hart’s Ben Barber — SURPRISE — survived the death-defying ride-along, helped crack the big case, and managed to melt even tough dude James Payton’s bitter stone heart (blah blah blah, handshake? No, hug — brother-in-law, blah blah blah). Now the Barbers are deep in domestic bliss and ready to put a bun in the oven — but before any (loving) procreation (between two married adults) can go down, Hart’s lady tells him, he’s gonna have to ask her brother if it’s cool. Uh-oh! Says Payton: “You wanna impregnate my sister? You gonna need to go with me on this ride-along … again.”

In the time since, though, Payton’s been recruited as a special investigator for Interpol, and so we’re out of Atlanta — and riding along in Utrecht! (The studio really wants to get “more multicultural to expand the demos.”) In a respectful nod to the unique tapestry of Europe, the climactic shootout features Barber being hilariously injured by a bevy of nationalities, each one wielding a representative weapon: a French person poking him in the eye with a giant baguette, a Dutch person bashing him in the head with wooden clogs, a Slovakian person dumping a whole bunch of goat milk on him, etc., etc.

Projected box office gross: $373 million, plus Kevin Hart becomes the first non-Brit ever knighted by the queen for his immeasurable contribution to humanity.

Ride Along: Around the World in a Ride-Along

This time, Barber really wants to get his wife a pet gerbil — but he’s gonna need someone’s per-mis-sion first. Whoop whoop! It’s a motherfucking ride-along! Following RA2:OB!’s sweeping success — it becomes the top-grossing movie in every last European principality, up to and including Luxembourg, Liechtenstein, and Vatican City — Universal Pictures really expands the demo, and takes this thing international. They drop the car, pile the power couple in an Interpol zeppelin, and have them touch down in every known, geographically definable community on earth. Northwest Arctic Inuits? You’re getting a ride-along! Basque separatists? You’re getting a ride-along! Jews of Bahrain? YOU’RE GETTING A RIDE-ALONG.

Ride Along: Before Midnight Along

Reuniting a year later, for what’s now their annual manhood-testing ride-along (this time Barber needs Payton’s permission to, um, buy his wife a new set of really expensive garden shears?), the dynamic duo run face-first into Interpol budget cuts, which have eliminated all company vehicles. No wheels? No problem! Barber and Payton take to the streets (of beautiful midsummer Zagreb) on their feet instead, whereupon they begin ruminating on the fickle nature of devotion, fidelity, and true, simple love. At the end, Barber tells Payton: “I assure you, that guy you vaguely remember … that sweet, romantic one you met on the first ride-along? That is me.”

Projected box office gross: $677 million, plus, for the first time in history, a complete sweep of the Independent Spirit Awards.

Fast-forward a decade, and we find that all of these brutal, ceaseless, once-a-year ride-alongs have taken a blistering emotional toll on our once-cheery Barber. His hair unshorn, his beard a perfectly greasy Fu Manchu, Barber tells Payton, “I think human consciousness is a tragic misstep in evolution. We became too self-aware. Nature created an aspect of nature separate from itself. We are creatures that should not exist by natural law.” Then Payton slaps him across the face, and Barber snaps out of it and immediately gets hilariously rolled down a bowling lane by a mean Malaysian dude in a clown costume. Strike!

Projected box office gross: How much money you got in your pocket right now? Take that, multiply by 70 billion, give it to Kevin Hart.