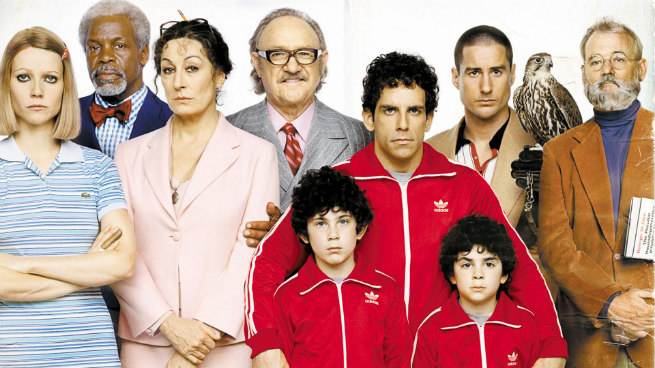 The Grand Budapest Hotel, the latest film from filmmaker/aesthete Wes Anderson, checks into theaters this weekend, packed to the gills with whimsical characters and delightful costumes and, undoubtedly, some kind of madcap plot. Love him or hate him, Anderson has been responsible for some of the most memorable film presences in the last two decades. Here are some of the Grantland staff’s favorites.

Andy Greenwald: For 20 years, Bill Murray made his bones snarking at authority. Then, in 1998, he suddenly appeared transformed: graying, paunchy, his crackling cyncism flattened into sadness. The student had skipped being the teacher and gone straight to middle management. As Herman Blume in Rushmore, Murray was the most perfect thing in a perfect film, underplaying every beat and joke — the bees, the baby carrots, the wrestling hyenas he has for sons — until the bottled-up emotion became nearly overwhelming. (Watch the haircut scene. I’ll wait.) Blume is the first (and in many ways best) of Wes Anderson’s surrogate father figures, an untrustworthy series of old goats who are transformed into bucking satyrs thanks to a racy highball of love, resentment, scrapping, yelling, and mixing it up. Anderson is mostly known these days for precocious kids who act like adults, but in hooking up with Murray he transformed the career of America’s foremost overgrown adolescent.

Brian Phillips: I’m not talking about dance lessons. I’m talking about putting a brick through the other guy’s windshield. I’m talking about taking it out and chopping it up! Oh, no, no, that’s dog’s blood. You got more grit, fire, and guts than any woman I ever met. You’re true blue. You heard me, Coltrane. I never knew how much interest you had, sweetie. Anybody interested in grabbing a couple of burgers and hitting the cemetery? Hell of a damn grave. Wish it was mine.

Note: Every Wes Anderson movie needs someone to say, “What characters? This is a bunch of little kids dressed up in animal costumes.”

Emily Yoshida: My current-day Wes Anderson hateration hurts me more than it hurts you. There were a few years there, when I was a moody yet impressionable teenager, that his first three films became a lifestyle blueprint of sorts for me. I haven’t watched The Royal Tenenbaums in years, but combing through the Margot Tenenbaum files on YouTube just now has dredged up a lot of stuff, akin to coming across long-forgotten childhood drawings you did of yourself as an astronaut, doctor, or world leader, except with more underage smoking. I feel like a bit of a mark when I realize how much of its prophecy has come to pass: Lacoste dress in storage at parents’ house: check. Lifelong affinity for Gwyneth Paltrow, at least in her late-’90s early-’00s peak: check. (“I tied it to the radiator.”) In hindsight, the reason it was so easy to identify with Anderson’s broken adult protagonists as an adolescent was that they were still adolescents themselves. But this Ramones-soundtracked montage of the wondrous life of Margot Tenenbaum hasn’t aged a day.

Sean Fennessey: Which Strapping Nerd-Hero He Created Does Wes Anderson Wish He Were? is a fun parlor game. The unlikeliest candidate from The Life Aquatic With Steve Zissou is the ever-undermined millionaire marine explorer Alistair Hennessey. With that Andersonian name, impeccable wardrobe, and bemused mien, Jeff Goldblum’s Hennessey is probably deserving of his own film, or at least a remake of this film seen strictly through the prism of his experience. That damned Zissou family, always stealing underwater craft only to redeem themselves in hostage situations. “Tell Carl to load my elephant gun with buckshot” is probably something Anderson likes to say in the mirror after a few cocktails.

Rembert Browne: I don’t think any film character “gets me” like the possum from Fantastic Mr. Fox. You know those situations when someone’s giving you instructions, telling you when to turn left or where to look for something, or why photosystem II comes before photosystem I with regard to the electron flow in oxygenic photosynthesis? And your eyes are open? And you’re trying to take in information? But nothing is happening in your brain? And your eyes turn into a hypnotized pinwheel vortex?

My man Kylie Sven Opossum does. Especially when George Clooney Fox is on the other end, saying this and that.

I’ve been there. I’m always there.

“Do you have bigger bags, for atlases or dictionaries?”

“Use the little bags, we’ll put the money in there. We’ll just use a lot of them … Do your best.”

This remains my favorite cinematic heist scene of all time. Why do you wear that tape on your nose?

“The crickets and the rust-beetles scuttled among the nettles of the sage thicket. ‘Vámonos, amigos,’ he whispered, and threw the busted leather flintcraw over the loose weave of the saddlecock. And they rode on in the friscalating dusklight.”

Many of the characters in The Royal Tenenbaums wear their personalities on the outside. Chas the widower has his tracksuit; he is constantly preparing to outrun tragedy. Richie is still sporting his Bjorn Borg–style headband in casual company some years after his epic on-court meltdown. And then there’s the drug-addled English professor slash western genre novelist Eli Cash, who is never seen without his Stetson, fringe leather jacket, and cowboy shirt, an urban author and academic trying to cultivate the air of a freewheeling cowboy. What I love about the character of Eli Cash, what makes him so hilarious in nearly every scene, is that he so very desperately wants to be considered a genius while simultaneously being a total fraud. In other words, he’s a writer. Here he is being interviewed on the Peter Bradley Show while tripping on mescaline.

Holly Anderson: Finally, somebody in one of these movies who’s conventionally handsome.

Q&A: Jason Katims on ‘About a Boy,’ ‘Parenthood,’ ‘Friday Night Lights,’ and Weeping in the Writers' Room