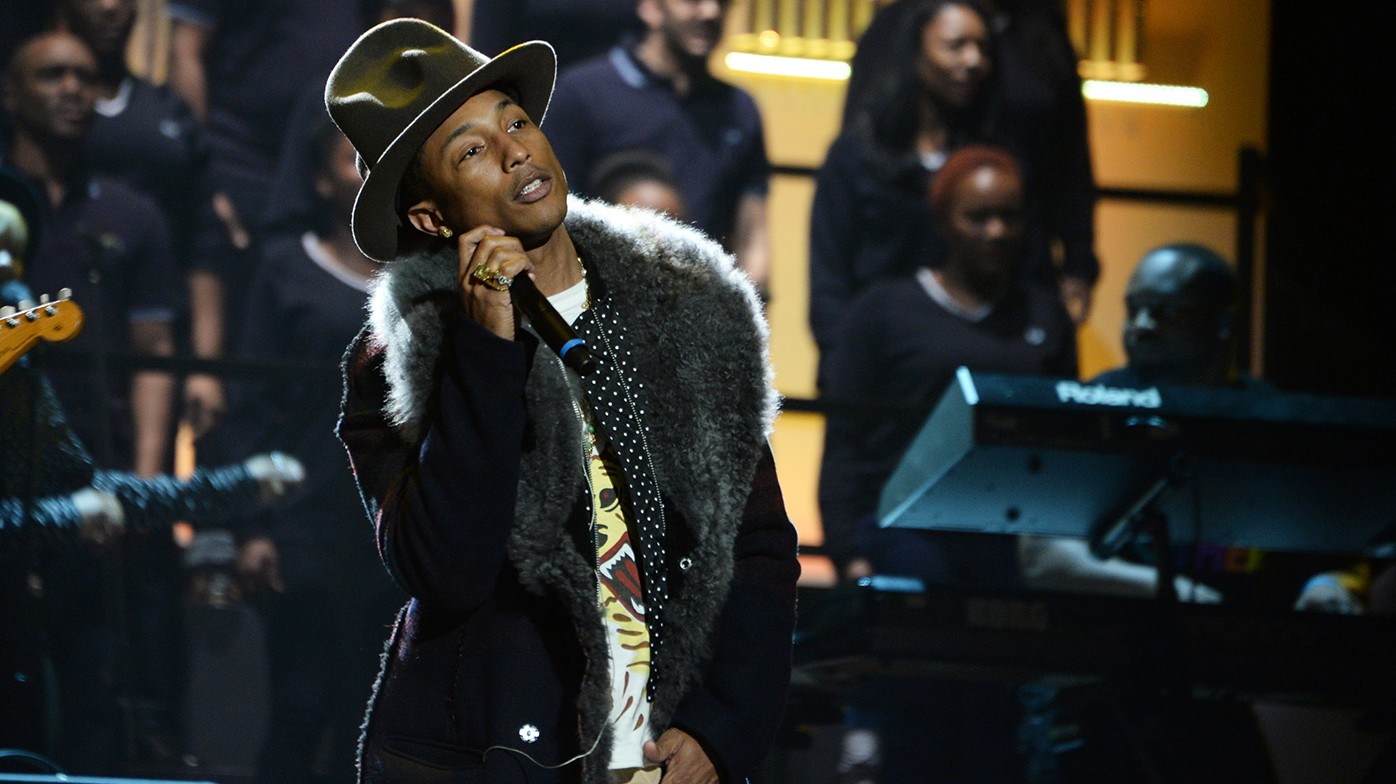 Zach Baron’s recent GQ profile of Pharrell Williams features a passage where the singer-songwriter-producer–tall hat enthusiast articulates his station in life as an artist. However, it’s not immediately evident that he’s doing this, because his quotes also happen to make very little sense.

Baron talked to Williams about his solo debut, 2006’s In My Mind, a troubled and commercially flaccid nonstarter that in retrospect sounds like Williams’s farewell to hip-hop. (Jay Z, Kanye West, Snoop Dogg, Nelly, and Pusha T are among the album’s guest stars.) Williams now dismisses the LP, claiming he “wrote those songs out of ego” and that “there was no purpose” to the project. In the story he attempts to distance himself from Mind’s braggadocio tone. “I was so under the wrong impression at the time,” Williams says.

“Purpose” is the operative word here. Williams seizes upon it when Baron presses him on what his “purpose” was back in the mid-’00s.

“I didn’t realize you should have a purpose. I thought you just did it just to do it,” Williams says. The failure of In My Mind “was the universe saying, ‘Look, you have a voice, you have an opportunity. What are you going to do with this?’”

Now, you could chalk this up as typical famous-person “my future self is my hero” style self-aggrandizement. At least that’s what I thought when I first read the GQ story. But after listening to Williams’s newly released sophomore solo effort, G I R L, I think I understand what he is getting at.

Williams does not rap on G I R L as he (mostly) did on Mind. Instead, he sings in his distinctive, quasi-competent (though greatly improved) ’70s soul-guy falsetto. This is because, while Mind was pitched to a contemporary rap audience, G I R L is very much a wedding reception record. It is good-time, broad-minded, cross-generational dance music influenced by only the most obvious and widely accepted “party” touchstones: Motown, Off the Wall–era Michael Jackson, ’80s Prince, Williams’s own early ’00s records with Justin Timberlake, and of course Daft Punk’s “Get Lucky” and Robin Thicke’s “Blurred Lines,” the two inescapable 2013 hits that Williams cowrote.

“Get Lucky” and “Blurred Lines” didn’t just put Williams in the middle of the road, they made him the very pavement of which that road is constructed. Judging by the video for the single-mindedly upbeat “Happy,” currently the no. 1 song in the country and G I R L’s signature track, Williams has embraced this without reservation. Images of the frightfully youthful 40-year-old Williams are intercut with clips of celebrities and regular folks dancing (sometimes well but mostly not) to the song’s handclap-happy rhythm. The message is obvious: This song is for everyone. Join us or feel left out.

Just as he did with “Blurred Lines,” Williams raids Marvin Gaye’s back catalogue for “Happy,” though the song is ultimately similar to ’60s classics like “Ain’t That Peculiar” and “Baby Don’t Do It” mainly in spirit rather than design. Musically and lyrically (“Clap along if you feel like happiness is the truth,” Williams implores, to the objection of no one but cave-dwelling sociopaths), “Happy” is so pure and effervescent that criticizing it feels like a hate crime. Only after constant overexposure from the radio, TV commercials, and department-store PA systems will despising “Happy” not only seem appropriate but virtuous. (I’m betting on this occurring two weeks from now.)

The default adjective for G I R L is “likable,” which I won’t dispute even though (1) I didn’t like it at first, and (2) I still only really like three songs: “Hunter,” because it sounds like the perfect throwback pop-funk single I want to believe Prince can still write and wish he just would already; “Come Get It Bae,” because it has the album’s best beat, and creating the best beats remains Williams’s highest calling; and “It Girl,” because Michael Jackson is dead, and this is the closest we’ll get to a great new Michael Jackson song in 2014. The rest of G I R L is fine until the exact moment you’ve heard it one too many times. Then you might suddenly feel like never putting it on again. It’s as if G I R L is implanted with an auto-destruct device that instantly eradicates the record from your brain the moment it runs out of quick-release pleasure tablets to administer. Because beyond fleeting pleasure, G I R L has little else to offer.

Initially, I was disappointed that G I R L  had virtually nothing in common with 2002’s In Search Of…, one of my favorite records of the young century, which Williams made with his rap-rock-punk-funk strip-club collective N.E.R.D. In Search Of… is commonly described as a precursor to nonconformist R&B stars like Frank Ocean and Janelle Monáe, but it goes much wider and weirder than either of those artists, or for that matter most other people who followed in Search’s aftermath. It’s the rare record that sounded like the future when it came out and actually crystallized, with accuracy, what became the future. The disregard for genre distinctions on In Search Of… — it’s a rock-and-roll record with a hip-hop sensibility, a hip-hop record with a rock-and-roll sensibility, a Steely Dan LP with a 2 Live Crew twist, a celebration of bad taste by whipsmart cultural connoisseurs — seems both prescient and yet (still) singular. G I R L, meanwhile, pulls into the slow lane and never leaves it.

That G I R L isn’t as eccentric or adventurous as Williams’s best work shouldn’t necessarily be held against it. On its own terms, the record succeeds in achieving Williams’s ambitiously populist (though creatively modest) goals. It’s just kind of amazing to see how far Williams has strayed from the genre he helped shape in the late ’90s and early ’00s. G I R L has no relationship with rap; no rappers guest on the record (Timberlake, Alicia Keys, Daft Punk, Miley Cyrus, and JoJo make cameos), and the musical reference points predate the rise of hip-hop culture.

Even Thicke’s pleasurably empty 2013 LP Blurred Lines — which feels like the closest precursor to G I R L — employed Kendrick Lamar and T.I. as supporting players. You could argue that Thicke had to do that; after all, “rap energy is pop energy,” as Sean Fennessey recently wrote. But on G I R L, Williams is running on tamer fuel. On “Hunter,” Williams references Duck Dynasty, not in a negative way, perhaps out of recognition that he’s now part of the same stratum of middlebrow culture. Again, that’s an observation, not a criticism, because Williams’s pivot has clearly worked: “Happy” is the first song by a black artist to top the Hot 100 since Rihanna’s “Diamonds” in December 2012.

With the possible exception of Rick Rubin, no producer has ever been more successful at reclamation projects than Williams. Timberlake, Britney Spears, Madonna, Cyrus — he’s long been a go-to guy in making square pop stars seem a little more hip. And he hasn’t completely lost that. (Kerry Washington introduced him as “the phenomenally cool Pharrell Williams” at the Oscars on Sunday. Nobody called U2 “phenomenally cool.”) But if “Happy” dominates 2014 like “Get Lucky” and “Blurred Lines” dominated last year, Pharrell Williams may soon need his own version of Pharrell Williams.