Robin Thicke’s Blurred Lines: Beating Timberlake at His Own Game 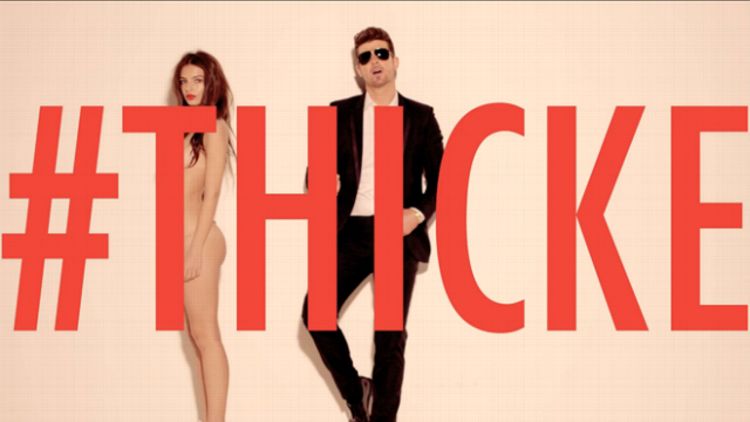 Pop music is designed to constantly shed its skin and reboot with panther quickness. But there’s another side of pop, too, where audiences who get left behind are served by “post-evolution” replacements. When the Beatles moved on from teenybopper fodder to Sgt. Pepper, the Monkees emerged to fill the void. When rap took a hard-core turn, MC Hammer danced his way into the mainstream. When Pearl Jam retreated from MTV, Stone Temple Pilots suddenly appeared to play the role of telegenic grungesters. And so it goes for Robin Thicke, the dubiously coiffed real-life Mike Seaver whose monster hit single “Blurred Lines” is finally joined by a full-length album of the same name released this week. Thicke’s post-evolution role? To be Justin Timberlake for people who miss the old Timberlake.

An intermittently successful journeyman R&B singer-songwriter whose career stretches way back to the early ’90s, Thicke has been cast as the Monkees/Hammer/STP to Justin Timberlake’s Beatles/N.W.A/Pearl Jam. And he’s playing the part well: “Blurred Lines” is far more infectious than anything on Timberlake’s recent The 20/20 Experience, and the eponymous 10-song, 38-minute album is a breezier and more compact listen. Featuring collaborations with Pharrell Williams and Timbaland, Timberlake’s highest profile co-conspirators, as well as steely-eyed pop mercenaries like will.i.am and Dr. Luke, Blurred Lines is the most chart-conscious album yet for an artist who never scored a Top 10 pop single in his decadelong recording career before 2013. Aside from a couple of slow songs tucked into its final third, Blurred Lines is the fun, upbeat, and easily digestible dance-oriented record that many people wish The 20/20 Experience was.

Among those people are music critics, who typically don’t treat post-evolution crowd-pleasers kindly. But weariness over the hype and pretension (in the form of bloated song lengths and “classy” trad-soul posturing) of The 20/20 Experience has played in Thicke’s favor among some scribes, who otherwise hadn’t given Thicke much thought since the mid-’00s, after his 2006 album The Evolution of Robin Thicke went platinum and his career subsequently cooled. (His next three albums sold less combined than Evolution.) Now Thicke is suddenly being sold as the less stuffy and more approachable Timberlake alternative — an off-brand but surprisingly edible Timberfake.

“This is the album that Justin Timberlake is too famous to make in 2013,” Spin declared in an enthusiastic review last month, praising Thicke’s willingness to “offer up whatever cheesy line, vocal acrobatic, pop hook or funk groove or electro flourish that it takes to keep you listening.” New York magazine’s Jody Rosen takes a similar tack in his glowing assessment of Blurred Lines, bemoaning Timberlake’s decision to become “a retro-soul man, boring everyone stiff with windy, hook-starved jams,” and contrasting it with Thicke’s relatively proletarian approach. “Thicke has not forgotten the traditional recipe,” Rosen writes. “Take a tasty tune, season with smut, and bake, at high heat, au gratin.”

To get to the bottom of Thicke’s newfound critical appeal, it’s worth briefly considering the enduring cult of the guilelessly funky white male poindexter. Emphasis on the singular — there’s usually room for just one of these dudes on the cultural landscape at a time. This person is an inherently dorky Caucasian who successfully appropriates black culture because of a commendable application of skill, charisma, and panache — without ever becoming actually cool in the process. (Not being cool is a big part of what makes the guilelessly funky white male poindexter likable.) It’s a maneuver that requires a level of self-awareness that’s more sincere than ironic. (Midnite Vultures–era Beck need not apply.) The GFWMP only winks at the audience because he’s as amazed as anyone that he’s pulling it off. (For further guidance, please consult the cover of Boz Scaggs’s Hits!, the climactic dance scene from Napoleon Dynamite, and the video for Jamiroquai’s “Virtual Insanity.”)

Timberlake had GFWMP status on lockdown on his first two albums. Back then, when he said he was bringing sexy back, people believed him. But on The 20/20 Experience, he’s no longer guileless, he’s significantly less funky, and let’s just say that poindexters don’t own tuxedos. Meanwhile, Thicke is recording throwback jams with Pharrell and strutting into clubs with his self-described “big dick.” It’s a stunningly aggressive yet undeniably effective change of attack for a formerly female-friendly proponent of monogamy and mid-tempo earnestness. Blurred Lines is a wall-to-wall sex dungeon constructed of velvet walls and ceiling mirrors, with Thicke shamelessly dropping come-ons about lacy underwear and sticking things into other things in an elastic voice that slinks from an orgasmic falsetto to a forcefully flirty tenor that’s a little too pure for such impure thoughts.

Before we get carried away, a reality check: The 20/20 Experience is the year’s best-selling album and the nearest competition has moved about half the units. As far as Thicke is concerned, Timberlake has absolutely nothing to worry about. Aside from the title track, Blurred Lines is well-executed if largely unexceptional fluff. (Though add my name to the petition asking Timberlake to record more Off the Wall–inspired pop-soul tunes like Thicke’s highly enjoyable “Ooo La La.”) It’s also not exactly Thicke’s true wheelhouse; ironically, Thicke is probably more amenable to making albums like The 20/20 Experience.

Like Timberlake, Thicke is married to an actress (Mission Impossible: Ghost Protocol star Paula Patton) that he’s fond of serenading in draggy classicist soul ballads like 2008’s “Lost Without U,” his biggest hit before “Blurred Lines.” In contrast with the racy video for “Blurred Lines,” which opens with Thicke cavorting in bed with a topless model, the video for “Lost Without U” shows Thicke snuggling with his IRL wife interspersed with clips of him soulfully strumming an acoustic guitar. It is the polar opposite of the “smut” that is served up hot and ready in abundance on Thicke’s latest record.

In an interview with the New York Times, Thicke said he made a conscious decision on Blurred Lines to go against the grain of his usual style — which is more akin to his mentor, the MOR R&B artist Brian McKnight — in order to swagger down lustier avenues. Helping him with this decision was Patton, who endorsed the dance tracks over Thicke’s slower numbers when he played her his demos. “I ended up deciding to keep my sadder songs for a later date and keep this album as much fun as possible, more of an escapist album,” he said. But make no mistake: In spite of his horndog exhortations to the contrary, Thicke is a man who loves his wife, and Blurred Lines isn’t representative of his sensibility. (Even a song like 2009’s “Sex Therapy” is, at heart, about tending to the needs of an overstressed partner.) So, enjoy this incarnation of Robin Thicke while you can, as his GFWMP days are likely numbered.