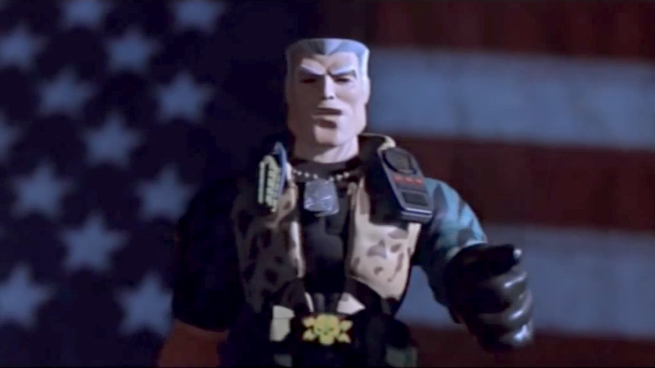 The Lego Movie, opening this Friday, continues a proud tradition of movies based on or around inanimate plastic objects. This week the Grantland staff gathers some of the more memorable entries from a subgenre that sells itself.

Amos Barshad: It’s now been more than a decade since some anonymous genius (long since no longer anonymous) dubbed over the old GI: Joe PSAs with jittery ramblings, threw ’em online, and watched the whole nonsensical thing go viral (via eBaum’s World). A lot has changed on the Internet since then: Now, major corporations have major budgets dedicated to crafting the kind of fragmented bits of Internet muddlings we once found so effervescent and true. But if there’s one thing that’s stayed the same, it’s body massage, body massage, who wants a body massage?

Mark Lisanti: When it was reported that GoBots: The Movie’s budget had swelled to an unprecedented $400 million back in 2007, the industry collectively sneered. The hubris was unspeakable. A bomb was coming.

But the ’Bots team had the last laugh. And a worldwide gross of $950 million. The franchise has never been stronger; GoBots 2: The Motorcycle One Returns is slated for a release in the summer of 2016, and Mark Wahlberg and The Rock have already signed on, sensing yet another opportunity to hitch their respective wagons to a proven winner. We could be looking at a $2 billion take. Never doubt the GoBots.

Emily Yoshida: The cottage industry of feature-length motion pictures based on the American Girl doll empire is a bit after my time. When I was saving up my allowance for a Molly in the early ’90s, Pleasant Company hadn’t yet been purchased by Mattel, there was no Girl of the Year, and American Girl Place was a single mythical outpost in Chicago that seemed almost too decadent to be real. Now there is a whole crop of surprisingly not-crappy movies, starring actors you might actually recognize, to add to your already overprogrammed child’s media diet, including one well-received theatrical one. (I caught Kit Kittredge: An American Girl on cable a couple of years ago, and it was a very pleasant viewing experience!) Anyway, Colonial-era Felicity was one of the weaker links in the lineup I grew up with, but here is a baby Shailene Woodley and Marcia Gay Harden making you cry and reminding spoiled little girls all across our brave nation that there was a time when strange, horrific diseases that not even a jar of leeches could cure could take away your loved ones at a moment’s notice, and you had to wear a bonnet while it happened. Look how far we’ve come!

Zach Dionne: It’s easy to grow up and turn into a snob and classify all the Transformers movies as junk without doing any due diligence. Michael Baysplosionking, Shia TheBeef, et al. But I’ve got empirical evidence that the first movie was a travesty, an experience that’ll allow me to comfortably avoid/look down upon the sequels until one of us shuffles off this mortal coil. (I suspect I’ll go before the franchise does.)

So: My college girlfriend and I celebrated our two-year anniversary by going to an elegant old cinema in Skowhegan, Maine. Two hearts, one action movie based on toys neither of us ever played with. I didn’t realize this relic of a theater had the capacity to go so loud — Bay had filmed the most egregiously bombastic thing I’d ever sat in front of, a war on the audience, fought with decibels. AND I STILL FELL ASLEEP, SO SOUNDLY. MULTIPLE TIMES. It was that boring and impossible to connect with. Now I’m left hoping against hope that some flying, jumping Legos will give me a toy-based moviegoing anecdote I’ll carry around for years, a tale of glee rather than one of bitching and moaning. Please, Lego Movie. Please be the best.

Alex Pappademas: No gritty reboot of anything will ever shock and excite me as much as the part of Transformers: The Movie where Spike says “Oh, shit!” did when I was 9.

Rembert Browne: Everything I know and understand about preparing for death I’ve learned in this one scene. And all my plans for escaping an untimely death revolve around being rescued by Theee Claaaawwwww.

netw3rk: 2001’s A.I., is, to my mind, the darkest and most interesting exploration of the timeless “What if our toys came to life?” theme. Born from the vision of Stanley Kubrick and directed by Steven Spielberg, the movie gets an unfair rap for having an ending that some audiences thought of as too bright and sunny, too Spielberg-ian, I guess. I found the ending terribly sad. The central question is this: What is life? If, through science, we create a machine that believes it is alive, is it, then, alive? How valuable is its life in relation to ours? What responsibility do we have toward the AI as its creator? In this scene, Monica Swinton introduces David — an artificial boy brought home by the Swinton family, whose own son, Martin, is in cryogenic stasis due to an illness — to Teddy, a favorite toy of her son’s.

Katie Baker: I’ve seen the movie Toys approximately 25 times and I still have no idea what happens in it. The trailer does a wonderful job summing it all up. It’s worth it just to hear the way the voice-over guy says “LL Cool J.”

Two-Headed Boys: Falling In and Out of Love With Neutral Milk Hotel