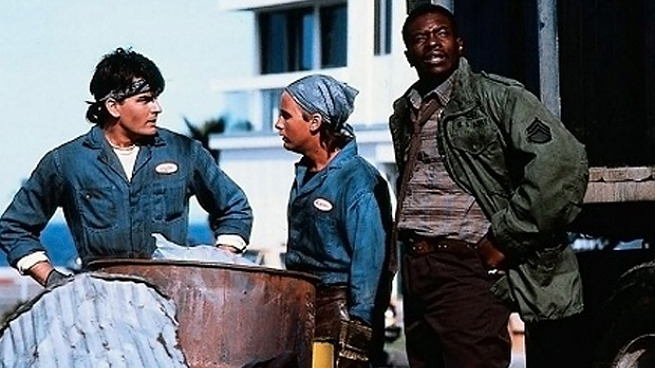 The “update” of the 1987 sci-fi satire RoboCop hits theaters today, and the jury’s still out (to put it politely) on whether it’s worth your time. But in a day and age when nearly everything filling up the local multiplex and your DVR is a sequel or a reboot, it still seems like we’re missing out on some prime remake source material. Here are our pitches for remakes that we’d actually like to see, and how we’d envision them in 2014.

Mark Lisanti: It’s a mistake to refer to Men at Work, the 1990 garbageman comedy starring real-life bros Charlie Sheen and Emilio Estevez, as a masterpiece. Not because the quality isn’t there — oh, it’s there — but because you’re already putting yourself in a defensive position. Instead of litigating its many merits — oh, the merits, they are many! — you’re instead revealing the movie’s very existence to most people, babbling about how Estevez both wrote and directed it, mentioning that Keith David is prominently featured and that everything with Keith David in it is worthy of your time. You’re explaining that they’re slacker trash collectors who stumble upon a dead body, and the obligatory wackiness that ensues. Keith David, though! Pre-tigerwizard crackypants Sheen! Why are we raising our voices? The first pop-culture usage of the golf clap! That’s not nothing!

Even though it’s perfectly realized in its current form, preserved in an amber VHS shell on the bookshelf, let’s run it through the remake machine. This one’s too easy. Directed by David Gordon Green. Starring James Franco and Seth Rogen (and Channing Tatum and Danny McBride in the supporting roles of the rival can-tossers). Keith David reprising his role, because if you take Keith David out of this, we will hunt you down like a mangy dog in an ill-fitting Tricky Dick mask and jam you inside a dignity-free trash receptacle. And we WILL resist the urge to call this Bad Trashmen or Bad Garbage-Boys or Pineapple Express 2: Schwag Truck. It will still be Men at Work. We will still prefer the original, and make squawking noises about the uselessness of such inspiration-bereft recycling, even as we fire up Fandango and buy a ticket.

And then we will immediately second-guess ourselves. Oh, crap. Should this be Owen and Luke Wilson? Do we need actual brothers? Can Luke direct? Luke directs!

No. NO. Let’s stick with the plan. We’ve put in an honest day’s work of throwing around garbage. Golf clap.

Andy Greenwald: I don’t want Hollywood to remake Night Moves because there’s anything wrong with it. To the contrary, I think it’s kind of perfect. I want Hollywood to remake Night Moves because it’s exactly the type of movie that no one is allowed to make for the first time anymore. It’s the story of Harry Moseby, a cynical, broken-down Los Angeles PI (played perfectly by Gene Hackman, the sort of actor who, were he coming up today, wouldn’t be allowed to be a leading man) who is hired to find a runaway teen. After a detour to a desert film set, where he encounters a smarmy stuntman played by a young James Woods, Harry’s journey ends up in the Keys, the bizarre and beautiful tip of Florida that makes regular Florida look like Ohio. There he discovers the limitations of a private eye: Just because he sees things doesn’t mean he has any power to stop them.

Let’s fire this up thing again with the eternally underrated and underserved Mark Ruffalo as Harry, Brie Larson as the runaway, and Miles Teller as the snotty stuntman. And let’s put David Gordon Green behind the camera. Pineapple Express established his ’70s bona fides; George Washington and Eastbound & Down proved he knows how to swing his camera from Hollywood to the hothouse of the South. And let’s do it fast before this movie comes out and steals the title for another generation.

netw3rk: The Breakfast Club may still be the sharpest drawing of teenage archetypes put to film. Which is a shame, since Hollywood has had nearly 30 years to try to top it. The Jock, The Nerd, The Delinquent, The Popular Kid, and The Basket Case (Ally Sheedy, brilliantly creating the ur-text of teen-Goth expression pretty much out of whole cloth) still ring true as the broad social outlines of the Hobbesian state of nature that is high school. Writer/director John Hughes (may he rest) ruled the ’80s by transmuting suburban teenage angst into movies, and in doing so, created one of the whitest oeuvres in modern American film. Not that anything is wrong with that (kinda). Off the top of my head, the only non-white characters in Hughes’s films were the problematic-approaching-offensive Long Duk Dong in Sixteen Candles and the valets from Ferris Bueller’s Day Off who temporarily expropriate Cameron’s dad’s classic Ferrari. (Ferris, to one of them, played by original Sonic Youth drummer Richard Edson: “Do you speak English?”) Maybe I’m missing one character, but probably not two. I guess there had to be a person of color somewhere in Planes, Trains and Automobiles, just walking in the background or something since they were at an airport. Anyway, the structural conceit of The Breakfast Club still holds up. Maybe just make it look like America in 2014.

Emily Yoshida: It’s only February and I’ve already used up most of my ’90s PBS Kids nostalgia chips in these weekly clip-finding exercises, so I may as well cash in my last one. Ghostwriter was a serialized children’s drama about a multicultural group of kids living in early-’90s Brooklyn who solve mysteries with the help of a Pong-like spirit whose messages only they can see. The mysteries usually centered around vandalism, petty theft, and other things their (usually white) urban no-goodnik peers got up to. The titular ghost was a supernatural force, but he didn’t threaten or fall in love with anyone; he just pushed letters around and transmitted pieces of verbal evidence to guide the kids toward the culprits.

In his natural form, Ghostwriter could only reassemble and quote words and letters from the physical world, but when he took over a computer, he had full command over language. Just imagine how much fun Ghostwriter would have now in our advanced world of texting, sexting, and other less salacious words with friends! A modern update of this show would read as an inner-city Gossip Girl, with kids who are more interested in getting their rapping careers off the ground than prepping for a debutante ball. They can track down cyberbullies and maybe punish some white-collar criminals. I haven’t decided yet if Ghostwriter would use emoji or not, but we can cross that bridge when we get there. I’m tempted to move the show to East L.A., but it could be just as interesting to hang around in Brooklyn and see some gentrification class warfare play out among tweens. As much as technology has changed since 1992, someone’s parent’s bodega will always need saving from evil real estate developers.

Seven Days in May

Dan Silver: I’m of the belief that great movies don’t need reboots, they just need to be rereleased to find new audiences. However, I am all in favor of remaking a film that, upon its first iteration, did not reach its full potential AND can be refreshed in a way that makes it relevant to a modern audience.

Seven Days in May meets these criteria with a vengeance.

On paper, this 1964 film should have been an instant classic. It’s a political thriller centered around a U.S. Military general’s secret scheme to overthrow the president because he supports a nuclear disarmament treaty in Russia (yeah, swap out Russia, and the film’s plot is still that relevant). And if you think it feels a little Manchurian Candidate–y, you’d be right. Seven Days was director John Frankenheimer’s follow-up film to Candidate. It also had a script from Rod Serling, and was filled out by a cast of folks with names like Kirk Douglas, Fredric March, Martin Balsam, Ava Gardner, and Burt Lancaster. Lancaster, by the way, playing the coup d’état-obsessed general (yeah, the heavy).

Insane, right? So how had you not heard about this film? Well, it’s actually not that great. The first 45 minutes show a ton of promise, with Candidate-level tension, but the final 45 are pretty convoluted, plodding, and ultimately toast the film into an overly sentimental patriotic panini. So in other words, not really worth your time.

But worth a remake? Absolutely. And here’s how I’d do it.

Keep the basic premise as is, but insert whatever country is currently being touted by the 24-hour news channels as being our country’s biggest threat. Or if one was feeling boldly creative, substitute nuclear disarmament for some kind of NSA-y, global informational security regulatory thing-y. Or just some convoluted conceit having to do with global finance (worked for Live Free or Die Hard, right?).

Holly Anderson: Inspired by a midnight wandering through the cable guide after rewatching that True Detective tracking shot eight or nine times in a row, picture this: Reign of Fire, but reimagined as a romantic comedy. Keep Gerard Butler. Reteam him with Katherine Heigl in Christian Bale’s role, because he’ll think he’s too good for this shit now. TWIST: Matthew McConaughey plays A DRAGON. “The love that reignited my heart … engulfed London in flames and plunged planet Earth into a new Dark Ages.” Rated PG-13.

Filed Under: Youtube Hall of Fame, robocop, Men at Work, Night Moves, The Breakfast Club, Seven Days in May, Reign of Fire

Drake has some choice words for Macklemore's Grammys apology text.