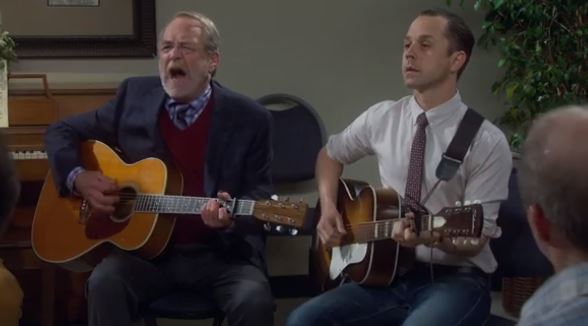 Fun fact: Rotten Tomatoes does TV shows, too! Funner fact: Fox and Seth MacFarlane’s Dads stands at a solid 0 percent, where it’s been since it arrived. Early into the first season, Andy Greenwald called it “crude, cheaply made, and titanically pleased with itself. To say that it was schlock would be an insult to schlock.” And here we are, with the Season 1 finale taking a direct (although Internet-only) shot at the Golden Globe–winning, ever-improving, non-evil Brooklyn Nine-Nine. The Dads episode closed merrily, with Martin Mull and Giovanni Ribisi crashing an Alcoholics Anonymous meeting to strum out the virtues of boozing. But there was an extended version of “Bottoms Up” primed to go online, and it directed its crosshairs right at Andy Samberg’s new house.

Did you catch that, at the 1:45 mark, when the camera jarringly decided to include the studio audience and the crew? “It takes gallons of wine / to sit through Brooklyn Nine-Nine / that Golden Globe should be mine!” Mull sings, full of whiskey and vinegar. The jab is probably fair game, along the same lines as comedians ribbing each other constantly and brutally, but still — yowza! Brooklyn Nine-Nine is also a Fox show, dudes! One that airs on the same night you do!

Why was it probably Dads’s final episode, though?, ask the meek Dads acolytes out there. Creatively, there’s a good chance it has run its course already. At a taping in December, the show “just [seemed] to have given up.” The ratings aren’t anything to write home about, with last night registering a series low. And MacFarlane seems to be gunning for movie stardom, so whatever Family Guy–grade creative juice he was lending Dads long ago has probably dissipated. However: Executive producers Alec Sulkin, Wellesley Wild, and Mike Scully tell The Wrap they’re feeling confident about a renewal, “but that they aren’t being cocky.” So maybe they know something the numbers don’t.