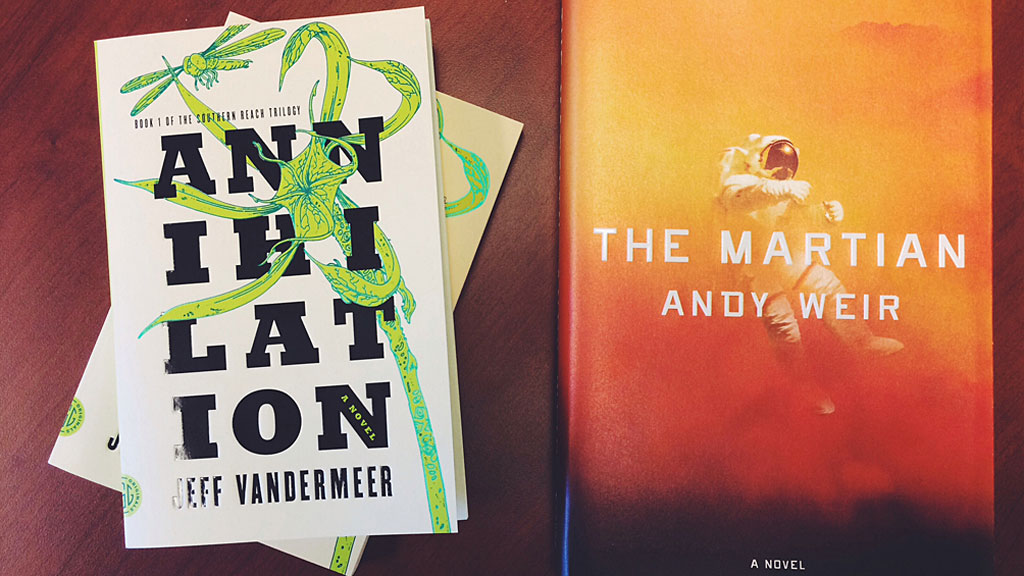 Jeff VanderMeer’s Annihilation follows the 12th expedition to Area X, a zone long abandoned and segregated from the rest of the continent, populated by mysterious wildlife and outlandish flora and fauna. Though it takes place on Earth, the setup of Annihilation feels akin to isolated sci-fi terrors of Alien. It’s a survival story, and from the get-go, there’s no sense pretending that everyone is going to make it out alive: Previous expeditions have gone missing, turned on each other, or returned only to have everyone commit suicide.

The characters of the 12th expedition are named by their roles — the Biologist, the Anthropologist, the Psychologist, and the Surveyor. The anonymity of these four women is basically the literary equivalent of dressing them all as Star Trek red shirts; each has her own motives, secret to everyone else. It doesn’t take long for mistrust and deception to tear the group apart, on top of the horrifying things they discover in the lush, haunted terrain of Area X.

Annihilation spends its time in the head of the Biologist, who was drawn to the 12th expedition after her husband returned from the 11th only to die a long, slow death from cancer. The way VanderMeer moves effortlessly between the outlandish exterior landscape of Area X and the interior of Annihilation’s point-of-view character creates an unnerving tension between what’s perceived and what’s imagined. He takes the pulpy adventure/horror aesthetic of ’60s and ’70s sci-fi and shapes it into an atmospheric psychological thriller.

Like the doomed explorers, you’ll be drawn to Area X for reasons that are hard to explain. Even though Annihilation sets up the first of three books in the Southern Reach trilogy (the other two are due out later this year), which is to say that it raises more questions than it answers, the book remains satisfying in its own right as a brooding, moody novel that teases and terrifies and fascinates.

Unlike Annihilation, The Martian only asks one question: How would someone survive on Mars? After being stranded during a six-day mission to the surface of Mars, astronaut Mark Watney has to figure out how to make the red planet habitable enough until the next Mars mission can find him and bring him back to Earth. What was supposed to be a six-day mission turns out to be several hundred days on the deserts of Mars (when reading “a six-day mission,” it’s almost impossible to not sing it to the tune of “a three-hour tour”).

There is something gripping about listening to Watney do a lot of math out loud, like calculating how long his rations will last and how many potatoes he can grow within the confines of his tiny Martian base. In addition to all of the book’s obsessive astronaut nerdery, author Andy Weir keeps things pretty lighthearted. For example, Watney realizes that, under maritime law, Mars is technically considered international pilots; he relishes the fact that this makes him a “space pirate.” And it’s The Martian’s sense of humor that makes some of the more technical parts manageable. The Martian certainly knows its audience (“Damn it, Jim, I’m a botanist, not a chemist.”), and the jokes Watney makes are endearing, even if they are borderline dad jokes (“In space, no one can hear you scream like a little girl.”).

If you’re looking for a psychological thriller about a man isolated for hundreds of days, you may want to look elsewhere. The closest Watney gets to a nervous breakdown is complaining about the disco music he is stranded with. But what works so well about The Martian is the way it knows what it wants to accomplish — Robinson Crusoe for NASA nerds — and is comfortable ignoring the rest. The thrills come from watching everything go wrong — and trust me, everything goes wrong — and seeing Watney thoughtfully figure his way out of every problem. Watney’s will and resolve are constants that are rarely questioned; in the same vein, neither are Weir’s.

I could imagine the Martin Starr character from Party Down complaining that neither of these books constitutes “hard sci-fi.” (He might also scoff to learn that the film rights have been acquired for both.) Even if the books have very different aims, I’ll concede that both Annihilation and The Martian operate knowingly outside of traditional science fiction, bending genres and having a lot of fun while doing it.