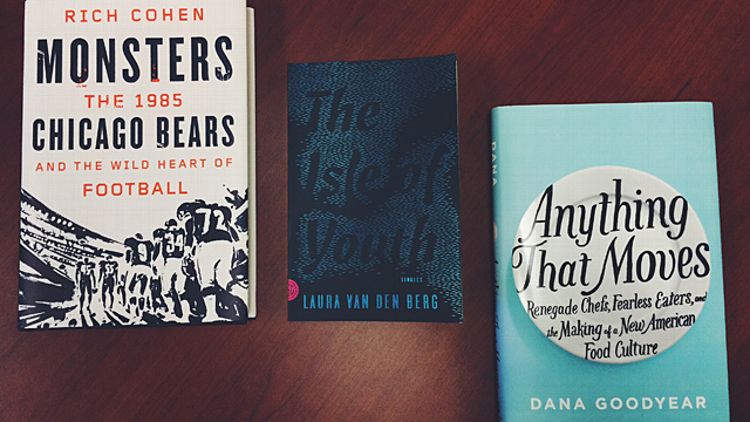 Monsters: The 1985 Chicago Bears and the Wild Heart of Football by Rich Cohen

I’m often asked why I don’t recommend sports books. I actually read quite a few of them; it’s just rare I find one I like. Generally speaking, a lot of sports books are too obsessive — letting nerdy details get in the way of telling a meaningful story — or not obsessive enough — trivializing an athlete, team, or entire sport.

This year has actually seen a handful of great books about the NFL. League of Denial, the book companion to the PBS Frontline documentary of the same name, is a serious look at the dangers of concussions in the NFL; Nate Jackson’s memoir, Slow Getting Up, is a tragicomic reflection on his six-year career as a largely invisible tight end for the Broncos. For all the attention these two books have gotten, Rich Cohen’s Monsters should be a part of that conversation.

If League of Denial is a vital piece of journalism and Slow Getting Up the personal perspective, then Monsters is both of those things through the lens of the past. Cohen’s history of the Bears is exhaustive (though never exhausting), and the story here very much belongs to Mike Ditka: His tough-as-nails ethos, which he inherited from his father, and, later, his first coach, George Halas, would be the groundwork for the Bears’ physical and mental strategy.

Ditka’s ’85 Bears are one of the greatest football teams in the sport’s history (this ESPN article says the greatest), but the team also epitomizes our ambivalent relationship to the sport. In talking to a couple of Hall of Famers, Cohen recognizes that football’s brutality is both what attracts and repels us to the sport.

Football is violent by design. It became a sensation because of television, but also because it expressed certain truths about American life: the dangers of the mines and mills; dirt, struggle, blood, grime; the division of labor; the all importance of the clock. Football was not a reprieve from working life, it was that life translated into another language.

Reading about sports is a bit like learning a language. Without context or culture, it’s not much of an education. As much as it is about the ’85 Bears, Monsters is an emotional education of football and “the Stone Age pleasure of watching large men battle to the point of exhaustion.”

At one point, Cohen attributes Halas for the development of football’s emphasis on the passing game: “It was Halas, as much as anyone, who invented the modern NFL offense and lifted the game from the ground into the air.” You can’t help but think that Cohen’s doing the same thing here for sports narratives.

TL;DR: The name of the typeface used on the cover is called Knockout, which describes Monsters in so many ways.

The Isle of Youth: Stories by Laura van den Berg

A sturdy short story collection works like a good album: strong piece by piece, but also on the whole. “I Looked for You, I Called Your Name” is as strong an opener as I’ve ever seen in a book of short stories, and it sets the tone and pace for the rest of Laura van den Berg’s second work, The Isle of Youth. At the center of each of these seven stories are women in search of something. Most of these women are very much inside their own heads, and these psychological wounds, tolls, and troubles present themselves as noirish mysteries to be uncovered. “I Looked for You,” for example, is about a newlywed couple who hit a string of literal near-disasters on their honeymoon. At one point the narrator, intoxicated, remarks that “the truth was meant to be seen, not just released in the middle of the night.” The Isle of Youth is all about hidden truths, though van den Berg isn’t willing to reveal those things easily.

I’m not much of a rereader, but I’ve returned to the collection’s best story, “Antarctica,” several times already. It follows a woman who travels to the research station in the Antarctic Peninsula where her brother was killed. “Antarctica” is perhaps a bit unwieldy the first time, but over multiple reads, it opened itself up to me. To extend the album metaphor past its welcome, it reminded me of my obsession with “Pyramids” from Frank Ocean’s Channel Orange. Like Ocean, this is van den Berg’s most ambitious, intricate piece, but it is also a showcase of all her talents: It’s coolly written, a masterful balance of subtle beauty and strangeness. Sometimes you get the sense these stories are more about mood than meaning, and as it turns out, that’s something you’re more likely to revisit — a puzzle, an uncertain feeling.

TL;DR: Seven women on the verge of nervous breakdown

Anything That Moves: Renegade Chefs, Fearless Eaters, and the Making of a New American Food Culture by Dana Goodyear

The “foodies” whom The New Yorker writer Dana Goodyear surrounds herself with aren’t the sorts of people who like brunch or brussels sprouts or putting pork belly on comfort foods. This is a far weirder, bolder bunch — a foodie movement that resembles Fear Factor more than it does Top Chef. Goodyear meets insect eaters and blood drinkers, explores markets that sell fatal herbs and hole-in-the-wall restaurants where the meals are so spicy that people bring laminated cards acknowledging the risks. And like any good exploration of an avant-garde subculture, Goodyear populates her stories with all sorts of fascinations. Where else might you learn that meth heads make extraordinarily good mushroom hunters, and that those same chanterelles are likely the ones that show up on your table at an upscale restaurant?

For all the crazy stories Goodyear has, Anything That Moves does, at times, feel disparate. What does this community of adventurous eaters represent? One chef hypothesizes that “foodie counterculture is a reaction to the oppression of just a few things to eat and big supermarkets where you find everywhere the same thing.” Still, while the rebelliousness is relatable, it’s also a little loony at the same time. In response to the FDA’s regulation of raw (i.e., unpasteurized) milk, one proponent says, “To me, it’s the new civil rights. It’s Rosa Parks.”

What Anything That Moves does better than talk about weird food is profile the obsessives who eat it. They’re an esoteric group whose influence is slowly seeping into the mainstream. You won’t want to adjust your dietary habits, but in a lot of ways, it’s already changing.