October Book Recommendations: The Circle, The Night Guest, and Thank You for Your Service 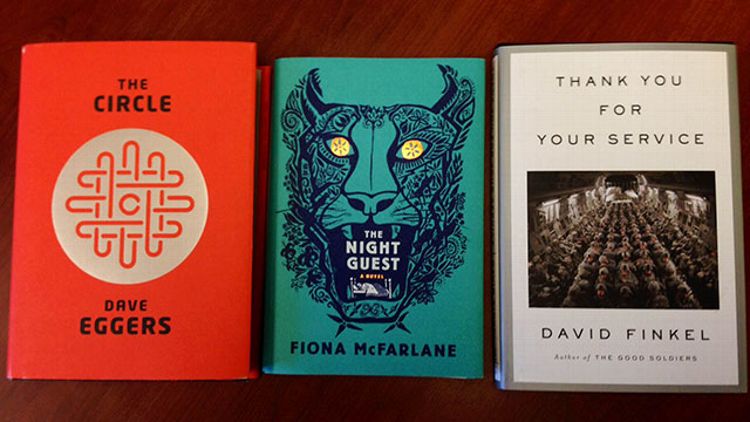 The Circle, by Dave Eggers

At the airport the other week, I met someone wearing Google Glass. Or more accurately, he introduced himself so he could tell me all about his tech-y eyewear. He was a well-meaning (though somewhat smug) software developer, and I nodded politely as he detailed all of Glass’s features: It could take photos and video with the command of his voice, even check Twitter or Facebook while we were talking. The interaction was off-putting, even as he described each of Glass’s features with the genuine, nerdy enthusiasm of a Comic-Con attendee.

Dave Eggers’s new novel, The Circle, pulls a similar trick throughout its 500-page lampoon of Google. Like his novel last year, the excellent A Hologram for the King (which I recommended), Eggers is less interested in realism and more interested in writing a modern fairy tales. The Circle, which resembles a more self-righteous vision of Google, is interested in connecting everything in people’s lives. The company is run by the Three Wisemen, and newbie employee Mae is quickly assimilated into the company’s juvenile playground culture.

Eggers, who lives in San Francisco, must be well attuned to the self-aggrandizing parts of the tech start-up scene. As the Circle adds new, creepier features, the characters in the book exude nothing but pure enthusiasm. As a reader, one feels a sense of growing uneasiness. (In fact, only two characters in the book ever sense that the ambitions of the Circle are troubling.) The distance between the reader and the characters grows from a schism to a chasm, and by the end, Mae’s motives feel alien.

“A circle is the strongest shape in the universe,” says one of the Wisemen. “Nothing can beat it, nothing can improve upon it, nothing can be more perfect. And that’s what we want to be: perfect. So any information that eludes us, anything that’s not accessible, prevents us from being perfect. You see?”

I think Eggers has identified the most dangerous part of San Francisco’s tech scene: It’s blinded by its best intentions. Some might criticize The Circle for being too obvious (and often it is — the caricatures of start-up bros feel too broad), but Eggers charges ahead with the confidence of a seasoned author. He accomplishes a lot of what Gary Shteyngart attempted with the overrated Super Sad True Love Story, a dystopian satire about a future run by Facebook. The difference is that Eggers is more thoughtful, and the escalating fantastical elements of The Circle give the narrative a stronger existential arc that supplants the preachy lessons that weighed down Shteyngart’s novel.

When I parted ways with the gentleman wearing Google Glass, the last thing he asked me was how to hail a cab. I thought about telling him to ask Glass, but I figured I’d let him understand the irony himself.

TL;DR: The dangers of the Internet/mansplaining

The Night Guest, by Fiona McFarlane

Ruth is a widower who lives by herself in a beach town in Australia. One night, she finds a woman in her living room. The woman introduces herself as Frida, a caretaker sent by the government. The circumstances seem suspicious, but Ruth, perhaps out of loneliness, lets her in. “I’m not a guest,” Frida says upon her introduction, “I’m not a stranger, and I’m not a friend.” Then who is Frida, exactly?

This is the central question of The Night Guest. The novel moves with the pace of a mystery, but grounds itself with many tender, funny moments. Even as the reader senses troublesome undercurrents early on, the relationship between Ruth and Frida is so sweetly rendered — sometimes maternal, other times friendly — that it’s easy to ignore the signs that Frida may have ulterior motives.

We also suspect that something is not right with Ruth. McFarlane wields a lot of clever, literary trickery here, especially for a debut novelist. Ruth’s growing fallibility, illustrated by the close third-person perspective, allows McFarlane to intensify quickly. The close perspective to Ruth also opens the story up to a meditation on aging and isolation. These two things work in tandem to create a deeply interior literary thriller — subtle and swift and fragile.

Thank You for Your Service, by David Finkel

I’ve been thinking a lot about the last scene in The Hurt Locker, when Jeremy Renner returns from Iraq and finds his home life too mundane after the intensity of defusing IEDs daily. The last shot of the film is Renner redeployed and ready for action. After reading David Finkel’s Thank You for Your Service, this ending feels completely dishonest.

Life after deployment is certainly jarring, but it’s not the need for adrenaline that keeps soldiers from returning to civilian life. All of the wounds — physical and psychological — put soldiers at a distance from the rest of society. Thank You for Your Service is a follow-up to Finkel’s The Good Soldiers, which shadowed the 2-16 Infantry Battalion during the surge in Baghdad. Now, having returned home, the soldiers struggle to reintegrate. Some wrestle with PTSD, others can’t find work. The most heartbreaking stories are those of soldiers who are no longer understood by their loved ones.

Finkel has produced an extraordinary, vital piece of narrative journalism here (no surprise, since he’s a veteran Pulitzer Prize–winning Washington Post reporter). Thank You is not prescriptive, and in a lot of ways, it’s apolitical. As haunting as these stories are, Finkel allows them to stand on their own. One that persists throughout the book is the relationship between Sergeant Adam Schumann and his wife, Saskia. Schumann came back from Iraq with severe PTSD, depression, and nightmares; Saskia does her best to be patient, and becomes angry with herself when she isn’t. The picture one of Saskia’s friends paints is bleak: “Nothing will get better … Nothing will be as it was before. Nothing will be the way I want it to be.”

I’ve had a hard time recommending this to people because it’s just so goddamn sad. I had to take a break every 40 or so pages to stare out the window. Without a doubt, Thank You for Your Service is one of the year’s most powerful books. The title comes from a phrase soldiers often hear after returning from Iraq. As much as one should show gratitude to a veteran for serving his country, it’s also an empty gesture. We thank them, but we don’t help them; we respect them, but not enough to understand their pain.