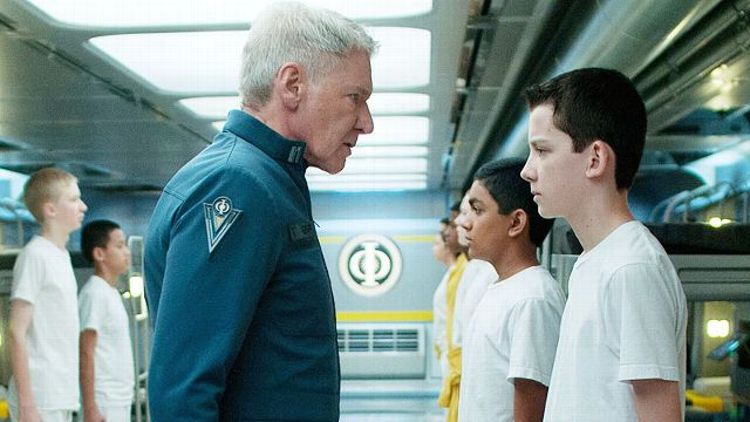 There are so many reasons to go to the movies — too many to list, really. But no matter how long the list, one item would never be “watching stars recite exposition.” Enough people attended Ender’s Game last weekend to place it at the top of the box office. But could any of them have known how profoundly unspectacular an experience they were in for? Could they have anticipated how much standing around and explaining would be required of Harrison Ford and Viola Davis? Ben Kingsley does a lot of talking, too, but he, at least, gets to cover his face in Maori tattoos and treat an Australian accent the way some cats treat a carpet.

The movie is set at an outer space training academy toward the close of the 21st century. Harrison Ford plays Colonel Graff. Davis is Major Anderson. They’ve got their eyes on a cadet whose strategic acumen could save mankind from a forecasted alien invasion. The boy’s name is Ender. He’s played by Asa Butterfield, a lithe yet runty British teenager with dark marbles for eyes and the sort of faintly American accent you encounter in some call centers. His manner of speech is meant to disarm. All it does is disorient.

Anyway, Ford and Davis spend all their scenes evaluating Ender’s psychological fitness and ability to lead. To perform these evaluations, they must stand or sit and stare into monitors showing footage of Ender with his fellow cadets. Ender is the cleverest in an elite class of teen mission specialists. (“Young people incorporate complex data better than adults,” says someone.) Training involves a lot of zero-gravity floating in a giant glass orb called the Battle Room. I haven’t read Orson Scott Card’s severely adored 1985 science fiction novel the movie is based on, so I took a friend who has read it enough for both of us. He assured me that Card’s version of events differs from the ones depicted in the film, insofar as Card’s is exciting.

Ender and his friends practice remote-control warfare, and it’s interesting that the real-world moral havoc that drones wreak now has a grim showbiz corollary. The drones are deadly, yes. But in the wrong hands, they’re also powerfully dull. Here those hands belong to Gavin Hood, who directed the film and adapted the novel, and brings a certain dreariness to the proceedings. Nothing feels original. Where’s the world-building wonder? Where’s the psychology? The characters interact as much with devices as they do with actual people. It’s like watching someone play a video game instead of watching the game itself.

This movie gets at the appeal of Card’s novels, which flatters kids who feel smarter than everyone else. But Hood doesn’t bring out the thrill of that sense of superiority. He buries it in plot points and lifeless academy sequences. My seatmate called the meet-and-greet among the cadets Top Toy Gun. The actual training sequences are Quarter Metal Jacket. Even the poor, young, energetic actors have few emotions to play, just pages and pages of declarative sentences and cheesy clunk. For instance, a girl named Petra (Hailee Steinfeld) flirts with Ender, and here’s how some of that goes:

The banter in Star Wars was almost as bad, but at least George Lucas created a great, intergalactic cracker upon which to spread his cheesiness. Ford, Davis, Kingsley, and the big, barking Englishman Nonso Anozie are reduced to nothing other than monitoring, chastising, and encouraging. Once in a while, the movie accidentally allows some actors to tell you why they’re here. At some point, for instance, Ford and Davis have an argument about the cadets, and she says, “It’s my job to put them back together again.” Which, of course, is always her job. For Ford, this assignment must be even more surreal. He’s in outer space looking, more or less, for the next Han Solo. If he seems ill-tempered and, at times, corpselike, it’s understandable. His acting life is flashing before his eyes.