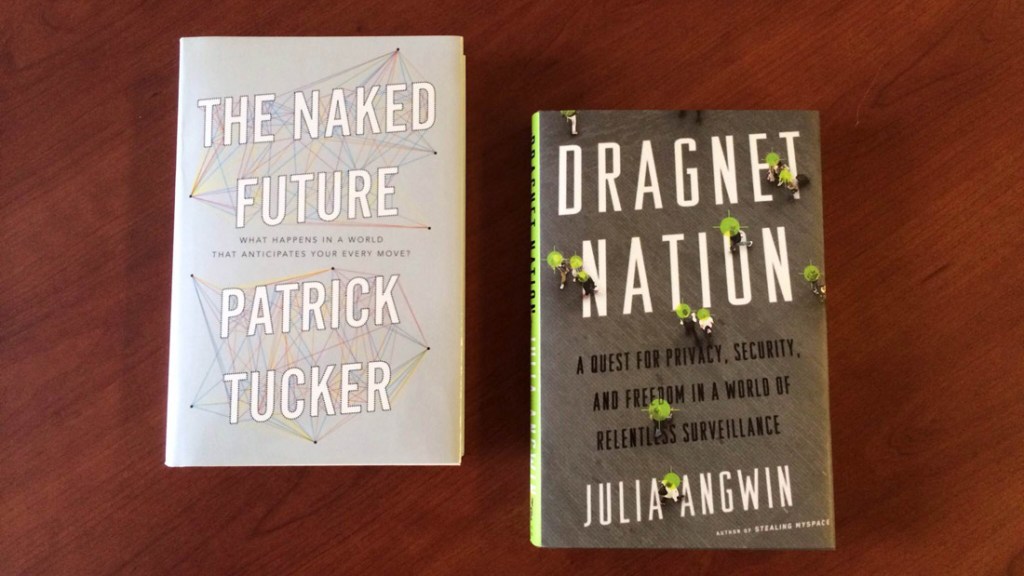 According to Patrick Tucker, we are all “naked.” Our nudity, as he defines it, is based on the amount of data collected on each and every one of us. “In the next two decades, we will predict huge areas of the future with far greater accuracy than ever before in human history,” he writes. “The Internet is turning prediction into an equation.”

In his smart, accessible book The Naked Future: What Happens in a World That Anticipates Your Every Move?, Tucker explores the more wholesome implications of big data — its influence on education, health care, and climate change — as well as the impact on its more potentially insidious applications — advertising, crime prevention, and government surveillance.

Tucker is great at introducing complex ideas with funny (sometimes corny) anecdotes, but The Naked Future is at its best when it delves into the nitty-gritty. Computer scientists at the Centers for Disease Control and Prevention created a model to predict flu outbreaks from compiling geo-tagged tweets. Facebook discovered news feed items were 7.37 times more likely to be shared if they had also been shared by a user’s friend. A start-up called Coursera can predict answers that students are likely to get wrong on a college math exam.

Tucker also doesn’t gloss over the shortcomings of computer-aided prediction. A conversation with OkCupid’s founders reveals the limitations of their data. CEO Sam Yagan says, “Because we don’t know when dates take place, the algorithms optimize for on-site communication. It’s hard for us to tell if a conversation you’re having on the site is going to lead to a date or is just superficial chat.” Because they can’t track that data, OkCupid isn’t necessarily a site for dates; it’s a system that encourages messaging for people who want to go on dates.

Big data can only forecast what we do based on the knowledge that we feed it. We just happen to feed it a lot, not just through our interactions on social media, but the location data on our phones, our shopping habits, who we email, and so on. Although Tucker acknowledges the risk of this sort of data collection (“the benefits are public and the costs are private”), he’s largely optimistic about the future. Or at least he’s more hopeful than Julia Angwin. As a stark contrast, her new book, Dragnet Nation: A Quest for Privacy, Security, and Freedom in a World of Relentless Surveillance, focuses on how big data affects the individual and his or her rights. Angwin’s thesis is much simpler: “Troves of personal data can and will be abused.”

Considering how much data is collected about you, it’s surprisingly hard to access it. One source available to the public is a service owned by academic database LexisNexis called PeopleWise, which sells reports on individuals. Try looking yourself up. (A basic report costs $1.99.) You’ll find that the personal data on you is startling accurate about things like your email address, maiden name, and the square-footage of your apartment.

A former Wall Street Journal writer, Angwin has been covering issues of personal privacy for more than a decade. In Dragnet Nation, she confronts the dangers of government surveillance. But the most gripping stories in the book are when Angwin takes every effort to make herself invisible to government and commercial dragnets.

First, Angwin attempts to leave all of her Google services behind (even Gmail), out of fear that her personal data might be abused (if you’re trusting of Google, remember that in 2010 the company fired an engineer for looking at teenagers’ IMs). She takes a page out of The Wire and replaces her phone with a disposable “burner.” It’s when she deactivates her social networks that Angwin realizes this isn’t a tenable way to live in the Internet age — to opt out of everything the web has to offer. In particular, she notes that removing herself from LinkedIn is detrimental to her journalism career. (One line of LinkedIn’s privacy policy reads, “We do not rent or sell personal information that you have not posted on LinkedIn.” Great, LinkedIn isn’t selling data it doesn’t have.)

Angwin even goes a step further by fabricating an alternate persona to live a digital life on her behalf. Angwin creates a Gmail account, invents a new mailing address, and opens a credit card, all under the pseudonym Ida Tarbell. In some ways, she was able to live anonymously, in other ways not. For example, she could reserve tables at restaurants and pay for her meals, but she couldn’t get away with paying for drinks with Ida’s card when the bartender knew her name.

Like Tucker, Angwin knows there’s no point resisting a future where our data is collected and mined. That reality is already here. But she has prescriptive ideas about how we can better protect ourselves and how laws can be put in place to defend individual rights. “Consider the no-fly list,” Angwin writes. “People placed on the list are not told how they got on the list, nor can they argue against the decision.” The Kafkaesque nature of dragnets can be diminished by establishing privacy laws that allow people to see data that is being used against them.

Although she’s fearful, Angwin believes that it’s up to the democratic process to ensure that data collection doesn’t overstep its bounds. Tucker takes a different approach. The best way to fight abusive marketing and government surveillance is to understand your data. “In the naked future, your data will help you live much more healthily, realize more of your own goals in less time, avoid inconvenience and danger … Your data is nothing less than a superpower waiting to be harnessed.”

Though The Naked Future and Dragnet Nation have different perspectives on the way data will or won’t screw with our lives, they both encourage people to understand what’s being collected, how it’s being collected, and what it might mean in the not-too-distant future. As Tucker puts it, this is not “change that is going to happen, so much as a change that has already occurred but has yet to be acknowledged or fully felt.”

Fiction Accomplished: Phil Klay’s debut, Redeployment, is perhaps the most vital short story collection to emerge in the past few years. These stories are both biting criticisms of recent wars (“Success was a matter of perspective. In Iraq it had to be.”) and deeply humanizing tales of those overseas and returning home. And like the wars, Klay — a former Marine — doesn’t romanticize the courage or strength of soldiers. Some are shell-shocked, others liars, while many are struggling to settle back into their old lives. Redeployment falls somewhere between the in-the-trenches lyricism of Kevin Powers’s The Yellow Birds and the bold satire of Ben Fountain’s Billy Lynn’s Long Halftime Walk. And yet, it feels more urgent than both. Even when it shows the rough edges of a first-time fiction writer, Redeployment is urgent, smart, and darkly comic.

The Cubs of Wall Street: The reputations of financial institutions like Goldman Sachs and Merrill Lynch were devastated after the 2008 crash. No one ever thought of these places as “good” necessarily, but the financial crisis revealed a level of greed and indifference that would forever stain the stature of these companies. One of the great ironies is that in the desolate post-crash job market, financial firms and banks were the only places hiring students out of college. Kevin Roose’s Young Money: Inside the Hidden World of Wall Street’s Post-Crash Recruits follows eight bankers as they endure the horribly long hours of young analysts (a finance “9 to 5” is from 9 a.m. to 5 a.m.). Sure, they may be making money hand over fist, but at what cost? Relationships dissolve, their health deteriorates, and most of the bankers constantly question the morality of how they spend their days. Roose’s book reveals that the high wages become a trap, which is fitting: Nothing on Wall Street doesn’t revolve around money.

Sleep No More: Former Pulitzer Prize nominee Karen Russell has a gift for minimalist world building. In the few pages of Sleep Donation, she establishes a world gripped by fatal insomnia, where “sleep” has become a commodity. And like all commodities, it is harvested and sold. Slumber Corps exists to encourage healthy sleepers to donate their good night’s rest, but the motivations of the Corps are threatened when they encounter the first universal sleep donor, “Baby A.” Sleep Donation feels like a continuation of Russell’s Vampires in the Lemon Grove, but at novella length, it’s a bit more substantial than any single story from that collection. Again, Russell shows a gift for literary wonder and mystery. Her cleverness makes her contemporaries look stilted and stale.

Hoverboards Are Real Now: Tony Hawk and Moby and T.O. and Doc Brown Wouldn't Lie About This