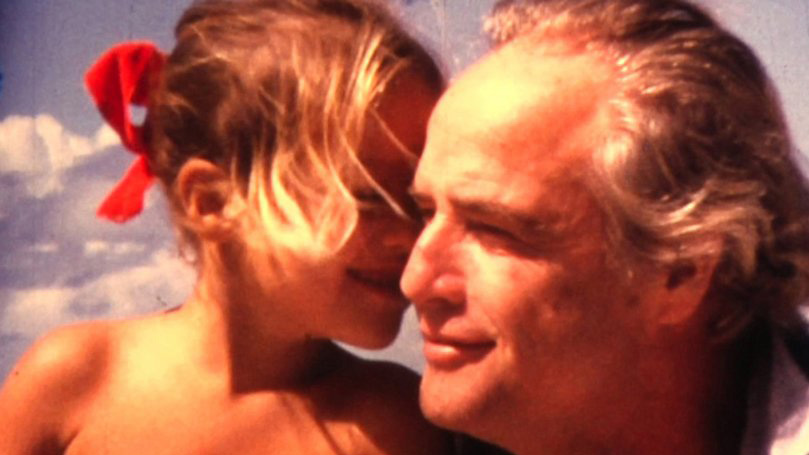 Maybe you’ve already heard, but in the future, actors will all just be holograms that directors will use as they see fit. That’s what Marlon Brando thought, anyway. In the 1980s, he went ahead and made a digital version of his face and head at a place called Cyberware. At the time, it was a state-of-the-art rendering. That 3-D heads haunts Listen to Me Marlon, a documentary by Stevan Riley that opens Wednesday in New York (it will air this fall on Showtime). The film is guided by Brando’s ruminative regret — about his fame, his talent, his worth as a father, about a life he felt he wasted.1 It combines news and on-set footage with material from Brando’s private archive, including the many hours of audio recordings Brando made before he died in 2004. The recordings were attempts at therapy. More than once the movie cuts to the spinning gears of cassette tapes with titles like “Self-Hypnosis #7” and so on.

Listen to Me’s wacky, spiritual power seems to emanate from that floating, rotating, mathematical arrangement of digital lasers that form Brando’s visage, which an effects team has re-created from the Cyberware scans. It’s a ghostly effect, intentionally incomplete — dated but hypnotically so. Riley returns to it four or five times over the course of the film’s 95 minutes, hovering on a screen that the camera wanders by as it snakes and sneaks around what’s meant to be one of Brando’s homes. There’s no glut of talking heads, just this one. It’s the head that’s the source of musings on Brando’s fraught relationship with his father, his leftist political beliefs, his habit of taking parts in the 1970s for money.

Part of Riley’s achievement is a simple matter of assembly. His editing manages to find a movie amid all of Brando’s raving, pontification, and truly deep thinking. The enlaced audiovisual material becomes as intoxicatingly impressionistic as 3-D Brando. Here, that Brando is earnest, self-flagellating, and helpless against his weaknesses — for women, for food, for non-artistic respectability. Was he an even adequate father? The film opens with old news reports of the killing that took place at his Beverly Hills compound in 1990. His son Christian had shot the boyfriend of his younger half-sister, Cheyenne, and in the courtroom footage Brando is overweight and distraught.

There’s no explicit reckoning with the conditions in which the kids were raised or what those conditions might have been. But, to go with Brando’s own glum characterization of both kids, there are answering-machine messages from a teenage Christian to Brando in which Christian wondered when he’d be seeing his father. No one in the bloodline seemed happy. Brando’s own childhood was often emotionally overcast. His mother drank. His father could be remote. He calls them both hypocrites and publicly rebelled against his father’s aloof masculinity well into his stardom. The movie makes a subtle suggestion that rebellion began in art and that the legendary acting teacher Stella Adler was a maternal surrogate.

But the gloom of emotional anarchy often seemed to be roiling Brando. Adler gave him a Method actor’s education, which, at his best, he tapped into to do the actor’s equivalent of action painting. The film proceeds more or less chronologically, beginning in the 1950s and winding down early in the 1980s, and over the course of the movie the steady exposure to Brando’s many moods and phases and looks recasts the meaning of his artistic heroism. It’s as far inside this man and his selves as I ever thought I’d get. And in being so far in, you get to thinking about the point of performance (Brando hated but needed it), about the toxicity of fame, about what the hell masculinity is.

That last thought really lingers. The Brando legend is of a man who changed acting, and who in doing so turned manliness inside out. Listen to Me encourages us to appreciate that revolution in a more intensely concentrated way. It’s not just the clip of him in a moment of unaffected effeminacy with Montgomery Clift. It’s in the way that he was completely emotional as both a performer and a man. There’s a passage from a talk show in which he sits alongside his chilly, aloof father, caught between docility and defiance. That’s a bit of the fight you see in his most serious early acting: the struggle against conforming to type. Brando was hard yet soft, cool yet unstable, never entirely settled, always intuiting. Before him, stars looked miserable — every time Glenn Ford smiled, for instance, I imagined someone just outside the camera frame pointing a gun at him. Other stars were impossibly unflappable. Wild horses could drag Randolph Scott straight to hell and he’d still look like a man in a bubble bath. Brando put the person before the persona. We talk about him in the context of men, but when he took off at the movies, he was more viscerally emotional than almost anyone. Adler called that kind of acting freedom. But by the time Brando had found the inspiration to reach his zenith in the early 1970s, with The Godfather and Last Tango in Paris, that freedom became a form of exorcism.

Riley also keeps you aware of Brando’s distaste for the spoils of his talent. It jeopardized the safety and mental health of his children (in 1972, Christian’s mother kidnapped him and stashed him with a biker gang). He enjoyed the privilege of being Marlon Brando but was simultaneously put off by it. He understood that there was something inherently unfair about his whiteness. In the film, he’s seen making overtures with the civil rights and black power movements. He falls in love with Tahitian culture and a Tahitian woman. He uses his second Oscar, for The Godfather in 1973, to make his famous plea on behalf of Native Americans. Riley includes that clip, in which the activist Sacheen Littlefeather accepts the award. And the initial booing inside the Dorothy Chandler Pavilion feels like a guilty rejection of Brando’s indictment of white luxury. Neither the movie nor Brando goes so far as to say that most of what Brando did subsequently was a mockery of talent and of the arguable stupidity of certain moviemaking. But the revulsion in his audiotapes is at its peak during that period. “Success took away my sanity,” he has said. “I searched but never found what I was looking for. Mine was a glamorous life but completely unfulfilling.” The movie treats that 3-D head like an oracle, which is shrewd. But you leave the movie feeling sure that Brando would have welcomed it as something else: a decapitation.