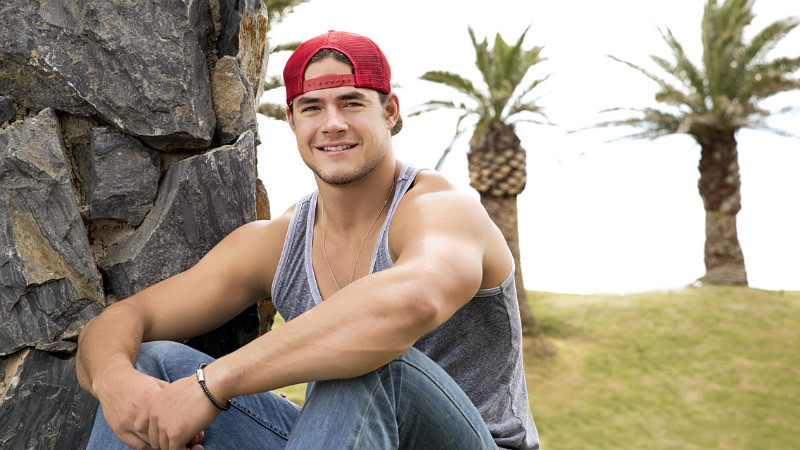 Zach is LeBron, pizza in Italy is disgusting, Laurel is in a class of her own, and Cody has the deepest of all Vs. Such was the week in reality TV. But before anything else, we must marvel in the quiet, Tim Duncan–esque dominance of Johnny Bananas.

Math is math. Data is not up for dispute. Johnny Bananas has won five seasons of The Challenge. That is undeniable proof that Mr. Bananas is the most dominant player in The Challenge history. He is not the best athlete, the best strategizer, the most likable … in fact, he is far from any of those things. But he is just good enough in all of those categories that he is a five-time The Challenge champion. You see, The Challenge is like a decathlon, in that you don’t have to be excellent at everything, but you do have to be persistent, proficient, and prepared enough at everything to win. He doesn’t have the body of CT, the mind of Frank, or the longevity of Mark Long, but he does have enough to be all of those things at all times. Shout-out to you, Bananas, and your bobblehead brother for being a champion. They can’t take this away from you. You have enough rings to fill the fingers of a hand. You are Tim Duncan.

Problem is, Zach is LeBron James …

The LeBron James of The Challenge — OK, fine, Zach: 0 points

Zach is LeBron James. The best player in the league, the highest expectations, the most god-given talent, the most badassness. The problem is, that isn’t all he has in common with LeBron James. He also gets cramps. Bad cramps.

I am not fucking with you when I say that Zach said the words “I am dying” four times during this finale. Four times, this man pronounced that he was on the brink of death due to cramping up. At least six times while watching Zach struggle through the final I said to myself, “My wife never made sounds like that during labor.” While he was walking up the volcano in the stretch leg of the final he said, “I can barely breathe, I am so scared I am going to pass out.” During one of those commercial break segments, we saw the Johnnys Portland and Bananas taking Zach’s clothes off for him before bed. Having our clothes taken off of us before bed is a place we have all been due to inslopsicatedocity; Zach was there because of fatigue and LeBron Jamesy cramps.

“I am not going to quit. However, I do feel like I am going to wake up in a hospital and not know how I got there.” He never died, he never woke up in the hospital, but he did show his true colors. He couldn’t take the final challenge. When the Johnnys — two men less physically impressive than you — beat you so decisively, you have to wonder, “Do I have what it takes?” The answer for Zach is simply “no.” The answer for LeBron is, “If you put me on a roster with semi-competent players, no problem.”

I suspect both will be back in the finals next year, with a chip on their muscular, potentially enhanced shoulders.

Italy (The Bachelorette), NEGATIVE ALL THE POINTS

Unpopular-opinion alert: Specialty local foods are bullshit. Ever try a pretzel on the streets of New York? Disgusting. A cheesesteak in Philly? Fantastic, but let’s be honest, not much better than a cheesesteak in your city. Orange in Florida? Average. Deep dish in Chicago? Too filling. Which brings us to easily the most important thing that happened on The Bachelorette this week: The pizza in Italy looked disgusting. 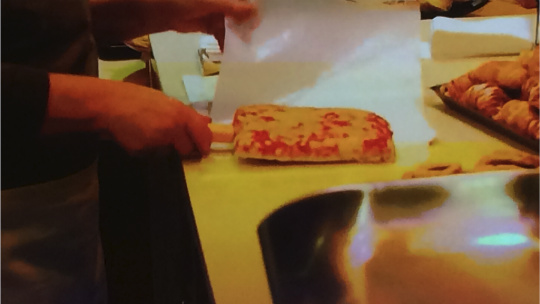 Look at that thing. It looks like a wet textbook. No question, this is the GRTFL Questionable Moment of the Week:

Do these Italians think we have never had Stouffer’s frozen pizza? Why so little cheese? What’s up with the wax paper? Is that supposed to be for one person? Was that pizza baked seven hours or seven days ago? Why would you order that shitty pizza when those delicious baked goods are available? Is this the official white flag in the international better-pizza battle? Do Italians even eat pizza, or just American tourists in Italy? Is it just me, or does that actually look worse than Stouffer’s? Is this a pizza or did someone eat spaghetti and then puke on a loaf of bread? How many randomly selected American pizza shops would you have to go to before you got a slice that looked worse than that? Fifty? A hundred? All of them? Was the Italian World Cup team underperforming because they were all carbed up on thick-ass bad pizza? Does he know that that slice isn’t even done?

Oh wait, I figured it out: They actually have delicious pizza everywhere in Italy but serve this bullshit to Americans as revenge for Jersey Shore. Touché, Italy. Touché.

She lost her best friend because she wanted it so much, she was edited as the villain during this whole season because production needed one, and she won the whole season. Without Ev, Emily, and Rachel, there is no one to test her. Honestly, the next The Challenge season should be built around finding a woman who can beat Laurel at The Challenge. She wasn’t nice to begin with, honestly, and this season she stretched the limits of likability, but she was unquestionably the champion. Her rule was never in doubt, and I like to think that played a role in her behavior. I will forever be a Laurel sympathizer and supporter. Especially during the after show, when Theresa threatened to punch her and Laurel was all, “Really? Let me walk over here and call you the fuck out.” You will never believe this, but Theresa not only didn’t make physical contact, she didn’t make eye contact: 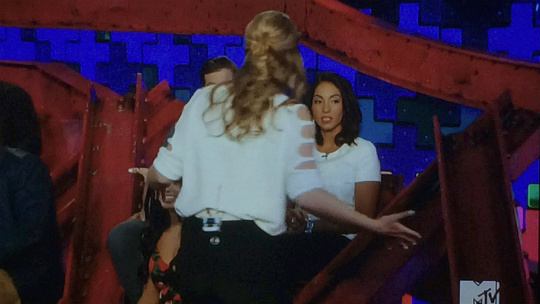 Laurel is the alpha bitch, and that deserves respect.

Cody hadn’t had a one-on-one date thus far. Think about it: This dude has traveled around the world with two dozen dudes all trying to woo the same woman for six weeks, listening to all the other bros talk about their connection with her, and he has never spent more than 10 minutes with her alone. When he finally got his date this week, he made a classic The Bachelorette mistake: He overcompensated. If you have an early one-on-one, the course of your relationship with the Bachelorette has a normal trajectory. You can take it slow, get to know each other, and do all the lovey-dovey stuff later. When you get your first one-on-one date late in the game, you have to go hard. Poor Cody went a little too hard:

I just want to, like, grab you, hug you, kiss you, roll around with you. I want to do all those things with you … it’s, it’s, it’s, it’s a weird feeling. I am telling you, I am looking at you right now in the eyes, and I am telling you that I want to know more about you. I want to meet your family. I want you to come to Chicago and I want you to be part of my life and I want to take you home to my mom and dad you’ll fall in love with me the more you stay around me.

The entire time he was talking about hugging Andi, kissing Andi, and how in love with him Andi would be … Andi was making this face: 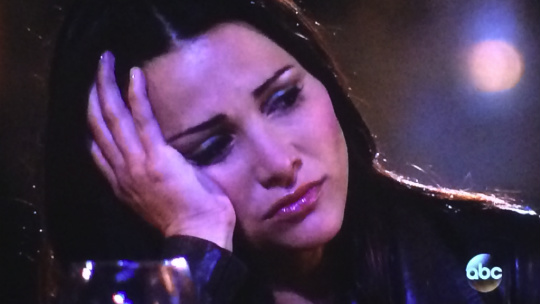 He was quickly sent home on the classic “I don’t want to waste your time” grounds. I bet Andi was kind of into Cody. She could see past the steroid muscles, the idiocy, and the “blond rhinoceros horn” haircut. But no one can see past this outfit: 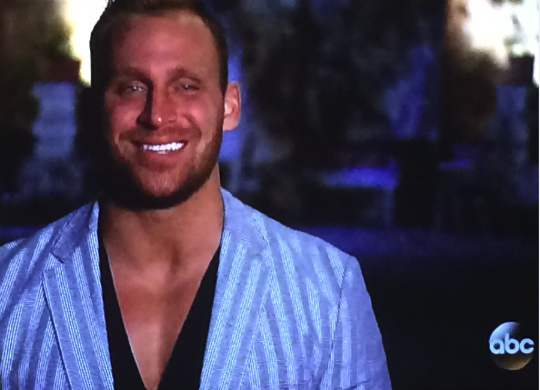 Does that V-neck even end? I have no proof that that V-neck does not go down to his crotch. I would never do it, but there is a way to wear a T-shirt with a suit, and … this is not that way. Cody, you will be missed; if I am ever in the Chicago metro area in desperate need of semi-legal growth supplements, I will reach out. Until then …

Seriously, who hired this guy? I have to imagine that whenever the question of who should host these after-shows comes up in a Bunim/Murray production meeting, and Jonathan Murray says, “I love Johnny Moseley, how about him?,” all the younger, lower-level producers just bite their tongues in fear of disagreeing with the boss and later laugh at all the edits while Moseley fumbles his way through take after take. Johnny Moseley: great skier, terrible host. However, he did a good job navigating the rough waters of Cohutta and Nany.

There is nothing better in this franchise than the moments when the wooers in the Bach format tell the wooees that they are falling in love with them. You see, the Bachelor(ette)s can’t return fire, so they end up just, like, acknowledging it. This week it was front-runner Normcore Nick’s turn:

Normcore Nick: “I can confidently say I am definitely falling in love. I know we have a long way to go, but I definitely am.”

Andi’s response is the exact same if you change the statement from “I am falling in love with you” to “I like your jacket.” Also, no, I do not like her jacket: 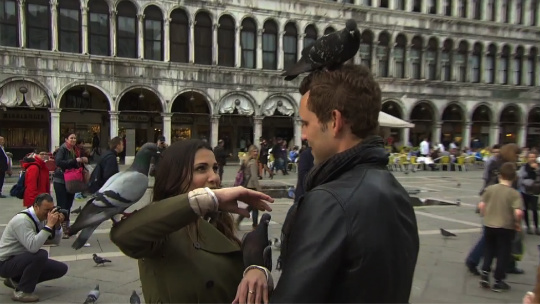 I also don’t like the fact that one of the activities on their date was to be covered in pigeons. Covered. In. Pigeons. Anyone who has ever lived in NYC knows that pigeons are just flying rats that will poop on you.

Shout to Cohutta; I totally forgot his last name was Grindstaff. GRINDSTAFF!

While Nany was climbing up a volcano during the Challenge finale, she ran into this: 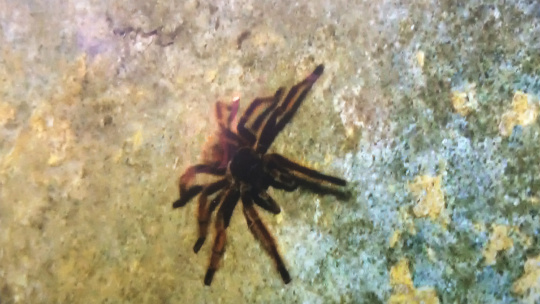 Why she selected “stay still and freak the fuck out” over “move away from the spider” as her course of action is the second dumbest thing she has ever done. The first, obviously, was, you know, Adam Royer.

Ring the Bachelorette poetry alarm! This time Basketball Brian tried his hand at the craft:

Whoa, gimme a second … that was deep. OK, he hates that he doesn’t hate that he is scared. So he is not scared about being scared. I feel like this poem is like Miles Davis’s “On the Corner” — it’s misunderstood at first but will someday be celebrated. (I still don’t understand it.)

After each episode of The Bachelor/ette, during the credit roll they show a little blooper moment from filming that week. It is often the best thing that happens in the episode, and this week it was the best thing that happened this millennium. You see, on the stupid group date they all took lie detector tests and answered a bunch of yes-or-no questions. One of those questions was “Have you ever fought in public?” When the Italian Lie Detector Guy asked that question, every single Bach Bro smiled a silly smile and decisively answered “yes.” To this day, the Italian Lie Detector Guy thinks that America is a land where street violence is an everyday occurrence and even questioning the predominance of the street-violence lifestyle is laughable.

Fart jokes are the best. Enjoy the weekend, listen to the Right Reasons podcast with Juliet Litman and me, and most importantly, LONG LIVE THE CHALLENGE!

Filed Under: Reality TV, TV, The Challenge, The Bachelorette, Recaps, The Decline and Fall of American Civilization